On the east side of Carrick Street in the village of Mullinahone (Slievardagh barony) in the south-east of County Tipperary stands the ruins of a hall house castle on a limestone rock outcrop some one meter above the surrounding ground level. The castle is also described as a two-storeyed chamber-donjon.[1] In 2011 the hall house castle stood at the rear of the public house premises of Michael Cahill. The present two storey structure has external measures of 17.30meters East-West and 13.50meters North-South (internal measures of 12.20meters E-W and 8.85meters N-S). The walls of the North, East and South sides extended to the full two storey height but the West wall only extended to the first floor. The castle was surrounded at its base by a substantial base-batter but much of this has been removed. The ground floor was lit by rectangular loops on the North and South walls. Much of the ground floor masonry and features are obscured by rubble and foliage. There is a small stair turret in the SW corner obscured by thick ivy.

The hall house was entered via a round-headed doorway in the east wall at first floor level. The first floor rested on a timber and had large round-headed windows. The upper reaches of the East wall has a line of corbels with a number of beam holes above these which possibly supported the roof.[2] 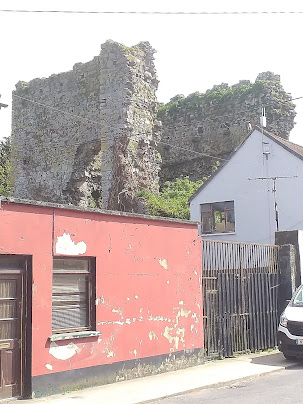 The castle from Carrick Street

Tradition ascribed ownership of Mullinahone hall house to the Knights Templar.[3] This tradition influenced the Ordnance Survey to mark the castle as the monastery of St. John with the ruined chapel of St. John nearby. Most of the property belonging to the Knights Templar at the time of their suppression in 1307 was later given to the Knights Hospitallers and the property registers of the latter show no evidence that they owned property in or around Mullinahone.[4] The description of the castle as a monastery is likely to be misplaced and the structure has a secular history. Historical documents placed Kells priory and the Sancto Albino (Tobin) family as owners of the Mullinahone area. The parish of Kilvemnon (sometimes spelt as Kilmenmon), in which Mullinahone is situated, was part of the Comsy district in medieval times.[5] In about 1200 Baldwin de Hamtenesford was lord of Comsy when he granted Kilvemnon church to Kells priory in County Kilkenny.[6] In about 1300 Adam de Sancto Albino (Tobin) and his son Edmund de Sancto Albino held property in the Comsy area.[7] In 1308-9 Sir John de Sancto Albino (Tobin) held the manor of Comsy by the service of 40s in royal service with suit of court every fortnight at Kiltevenan (Kiltinan).[8] In 1542 Richard, son of John de Sancto Albino of Rosseonyane (Rossane in Kilvemnon parish), gave land and property in Bryanyr, Ballycully and Rosseonyane (the latter two in Kilvemnon parish) in Comsy to Fulk Comerford, merchant of Callan, for the use of James Butler, Earl of Ormond.[9] 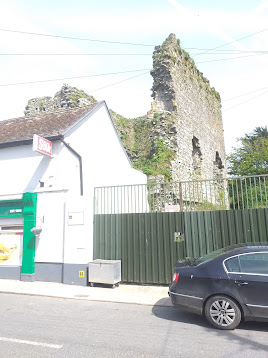 Castle behind the shop

In the sixteenth century Mullinahone hall house was surpassed as the centre of local administration by Killaghy tower house castle to the North-West and outside the village of Mullinahone. In the seventeenth century Killaghy tower house was surrounded by its own village.[10] The Tobin family were lords of Killaghy castle and the area of Mullinahone hall house in the sixteenth and seventeenth centuries. James Tobin of Killaghy held an estate of about 10,500 acres in the 1640s.[11] By the 1650s the hall house castle was in ruins with only a mill mentioned in the civil survey as the only structure of note in Mullinahone village.[12] After the Cromwellian confiscation and plantation of the 1650s the Tobin family lost Killaghy and Mullinahone but following a brief stay in Connacht the head of the family returned to live nearby in the Clonagoose townland of Kilvemon parish.[13] Long after Mullinahone castle had become a ruin it was the scene of brutal suppression in 1798 when the head of pikeman, Daniel Norton, was placed on the castle by the local yeomanry. 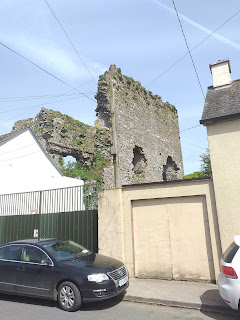 Street view of the castle

The architectural style of the hall house, also referred to as a two-storey chamber-donjon, is ascribed to the period around 1200-1220 in Munster and has many examples in Connacht after 1235. Mullinahone is possibly of that 1200-1220 date range.[14] This would place Baldwin de Hamtenesford as the person who commissioned Mullinahone castle which from the late thirteenth century onwards was occupied by the Sancto Albino (Tobin) family. Sometime around 1500 the Tobin family relocated from Mullinahone castle to Killaghy castle, a short distance to the north-west. 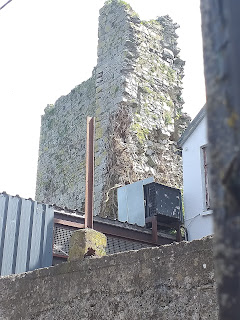 Mullinahone hall house castle stands off the main street behind a grocery shop. It is hoped by this article to bring the castle out into the public view and give Baldwin de Hamtenesford the title of most likely to have had the castle commissioned. In the second half of the thirteenth century the Tobin family came to live in the castle and manage the surrounding estate around Mullinahone before they moved out of the village to a new tower house castle at Killaghy. 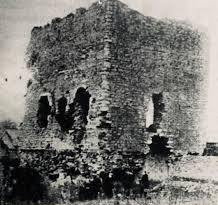 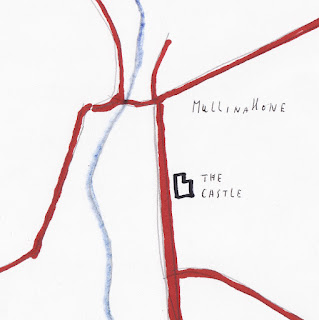 Posted by Niall O'Brien at 3:58 PM No comments: