The 1st edition of the Ordnance Survey map marks the site of a castle in a plot on the south side of the road from Timogue Church of Ireland church. The site of the castle is presently (August 2019) occupied by the ruins of Timogue creamery. No surface remains of what looks like a castle survives. The creamery is surrounded by a stone wall of uncertain date which could be interpreted as the bawn wall around a medieval or early modern castle. A 15th/16th century tower house at Kilmacow in the barony of Kinnatalloon, County Cork, existed in 1746 but had disappeared a few years later with the site now (2019) an empty field. A nearby three storey house (Springdale House) was built about 1750 and the house owner suggested that the tower house was used as an easy quarry for stone to build the new house.[1] At Timogue there is a late 18th century corn mill located just a few hundred feet south of the castle site and the supposed castle may also have been used as an easy quarry of stones to build the mill. Therefore the type and form of the castle cannot be easily determined or when it was built or what remodelling was done to it over the centuries. 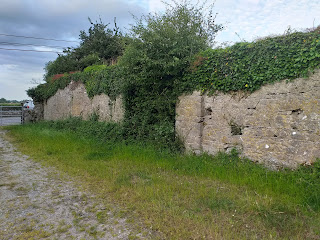 The possible bawn wall of the castle

The small parish of Timogue lies sandwiched between the two large parishes of Stradbally to the north-east and Timahoe to the south-west. Its name is said to derive from a church built by St. Maedoc of Ferns and so called teach Maedoc. Other writers discount this and say the name comes from the Anglo-Norman family of Madoc who held it in the 13th century. In the 1290s Meyler Madok was chief serjeant of Leys (Laois).[2] The location of the parish church across the road from the medieval Timogue castle would support the latter explanation for the parish name. Where a medieval castle is built beside a medieval church it is more usually the case that the castle was built first and the church built later as a chapel for the castle that later was elevated into a parish church. The early octagonal medieval limestone font shows Timogue to be a parish church as only such a church was allowed to have a font.[3]

In the 1170s Meiler fitz Henry was granted the cantred of Leys by Richard de Clare ‘Strongbow’ and built a castle near Timahoe. Shortly before 1202 Meiler fitz Henry granted some of the churches in his cantred to the new priory of Great Connell. Other churches, like at Timogue were outside this grant. Paul MacCotter suggested that Timogue was already church land and so outside Meiler’s control.[4] Later records show that Timogue parish was held by the Cistercian house of Abbeyleix.[5] Conner O More founded Abbeyleix in 1184 possibly as a reaction to Meyler fitz Henry building a castle at the old religious centre of Timahoe.[6] It is possible therefore that Timogue parish was granted to Abbeyleix sometime between 1184 and 1202. 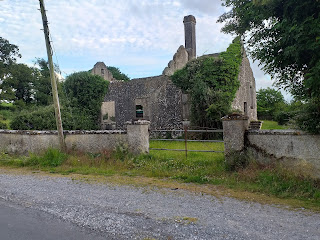 The creamery at Timogue on the possible site of the castle

In April 1298 John Fitzgerald (Baron of Offaly), son of Thomas Fitzgerald, gave Emelina de Longespee peaceful possession of the manor of Maynooth in return for John having peaceful possession of the manors of Timogue, Morett and St. Fintan’s.[13] Sometime between 1298 and 1312 Alan de la Zouch made a grant to John Fitzgerald of the castle and lands of Timogue (Taghmodoc) along with the castle and lands of Morett.[14] At about the same time of 1298 Emelina de Longespee quitclaimed any rights she had on Timogue, Morett and St. Fintan’s to John Fitzgerald. Jordan de Coventry was named as Emelina’s attorney to give seisin of Timogue manor to John Fitzgerald.[15] In February 1302 King Edward granted John Fitzgerald free warren in numerous properties in Ireland including Tathmothoc and Ballyfugnon in County Carlow.[16] By the time Alan de la Zouch died in 1314 he had disposed of all his Irish property.[17]

Timogue in the sixteenth century

In the Kildare rental of 1518 the Earl of Kildare possessed some property rights in Timogue but was also subject to expenses for the same property. The Earl paid half the tithes of Timogue in support of the vicarage by an indenture made on 20th February 1517 between Donagh, abbot of Abbeyleix, and the Earl of Kildare. In 1518 the Earl had the advowson, nomination and right of presentation for the rectory and vicarage of Timogue.[18] In 1518 the Earl’s manor of Timogue, known as the lordship of Taghmooghe, contained the lands of Ballyanlia, Ballyantyskiyn, Bally Conlyn, Ballyprior, Bealatha Cuyllean, Cloyth an puka, Curragh, Inchenaleakaghe, Killfyacla, Neall beag and Neaymneagha.[19]
An early folklore story of Timogue castle recounts the property as belonging to Fergus O’Kelly of Timogue and Luggacurren in the region of Farran-O’Kelly. Fergus O’Kelly had an only child and heiress named Ellinor who married Gerald Fitzgerald, 11th Earl of Kildare. Their son Gerald Fitzgerald was born at Timogue castle in 1546.[20] This story sounds good but only for the fact that the 11th Earl of Kildare fled Ireland for Europe in March 1540 and didn’t return England until 1549 and to Ireland until November 1555.[21] Although the Earl was associated with womanising it would be difficult to fit the birth of Gerald Fitzgerald of Timogue into the flight of the Earl. The 11th Earl of Kildare had only one officially wife, Mabel Browne, daughter of Sir Anthony Browne, who he married in May 1554.[22]

In 1584 Gerald the Younger received a lease of 101 years from his father of 2,745 acres in Queens County (County Laois) including Moret castle, Timogue castle, Luggacurren, Ballyprior, Allybeg and other places.[25] In 1585 Gerald the Younger married Margaret Bowen, eldest daughter of Robert Bowen of Ballyadams castle. In 1600 Gerald the Younger was murdered by a member of the O’More family of Laois and a memorial lies to his memory in Timogue church.[26] 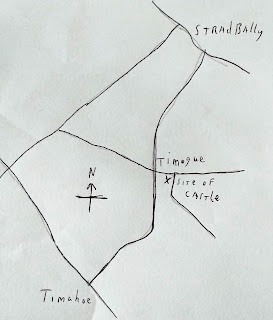 Timogue in the seventeenth century

Gerald Fitzgerald the Younger left two sons and three daughters. The second son, William Fitzgerald, was granted Timogue castle and lived there until his death in 1627 without issue when the property reverted to his elder brother Gerald Fitzgerald of Moret castle. This Gerald was known as Gearoid Garrultagh-buy (Gerald of the yellow hair) and in 1637 was High Sheriff of Queen’s County. Gerald Fitzgerald joined the Irish side in the 1641 Rebellion and had his estates confiscated when the English side won the war in 1653. Gerald Fitzgerald died in 1667 and was buried at Timogue.[27]

During the Interregnum the Commonwealth government leased Timogue castle to Sir William Whelan.[28] At the Court of Claims in 1663 Gerald Fitzgerald said that he had the manor of Timogue with its lands of Ballinreskin, Ballyprior, Ballycullen, Corragh, Culine, Fallibeg, Inshenallogh and Meanagh in Timogue parish from his mother, Margaret as administrator of her husband, Gerald Fitzgerald the Younger. Margaret had Timogue by the lease of 101 years made in 1584 in which she and her husband paid the Earl of Kildare ten pounds for Timogue during the Earl’s life and five pounds thereafter per year. But Gerald Fitzgerald’s claim for restoration of Timogue along with Morett and Shangenagh was dismissed as during the war Gerald manufactured pikes and held guns at his residence at the start of the Rebellion and his wife entertains rebels there.[29] It was not made clear if this residence was at Morett or Timogue.

In 1660 Benjamin Worsley and John Rawlins were the tituladoe (or chief) persons at Timogue which then had 8 English taxpayers and 35 Irish taxpayers.[30] The later history of Timogue castle is uncertain.