Road through the Jewish cemetery in Oxford

Road through the Jewish cemetery in Oxford

Before 1180 it seems that the Jews of Oxford had no burial ground in or near the city. Instead the dead were taken to London for burial. In the saintly works of St. Frideswide it is recorded that a Jew used offensive words against the saint. In 1180 this Jew died and was taken to London for burial but the cart broke down and the corpse fell out.[1]

It is not recorded when after 1180 that the Jewish community acquired a garden outside the East Gate of Oxford for a cemetery.[2] The site was formerly a water meadow by the Cherwell River.[3] The 1180s and 1190s were not good times for Jews living in England. In March 1190 some 150 Jews living in York sought protection in the royal castle from a blood thirsty mob. Instead of renouncing their faith, the Jews decided to kill each other and go to a more peaceful place. Many more Jews were killed in the streets of York and some Jews, who did surrender in the castle on peace terms, were later killed by the mob. The York massacre was part of a series of attacks upon the Jews of England since the coronation of King Richard in September 1189. There were a number of reasons for the attacks on the Jews. The country was going on crusade and the Jews were seen as an enemy within. The king was also pressurising the Jews for money and in turn the Jews wanted their debtors to pay up. In this regard many of the records in York Minster of debts to the Jews were destroyed after the massacre.[4]

The proclamation of peace and protection, issued by King Richard for the Jews, was ignored in many parts of the country and life for the Jews continued to be in peril. By the mid-1190s the crown had implemented special protection for the Jewish community and their number began to recover.[5] But crown protection didn’t protect the Jewish community from the crown itself. During the reign of King John the Jews of Bristol were seized and Isaac of Canterbury was hanged. Isaac’s sons had to wait until 1223 for restoration of Isaac’s property in Canterbury.[6]

The Jewish community in Oxford were not all local people. Outsiders like Copin the Jew of Worcester had property in Oxford over a number of years from 1210 to 1227 and Moses the Jew of Bristol held property around 1210 in Oxford.[7]

Meanwhile the Jewish cemetery outside the East Gate continued to be used by the community until at least the 1220s. On 5th May 1231, King Henry III granted the garden, alias cemetery, outside the East Gate to the master and brethren of the Hospital of St. John to erect their new hospital. This garden was described as formerly owned by the Jews community as their burial plot. The grant of the cemetery site reserved the Hospital to find a suitable plot outside the garden for the burial of dead Jews. It seems that King Henry gave the cemetery as a gift to the Hospital of St. John as the grant used the word concessit (gave up) in the wording.[8]

When the King granted the King’s mill to the Hospital in July 1231 the Jewish garden was to be used for rebuilding the Hospital and a new burial ground for the Jews was to be near the garden.[9] The Hospital of St. John was previously located beside the church of St. Peter and it would appear that its early sources of funding dried up and the grant of 1231 was part of a re-foundation of the Hospital. It is not clear how King Henry came to acquire the Jewish cemetery. There was some anti-Jewish feeling in the country at the time. in July 1234 the people of Newcastle upon Tyne paid the king 100marks to have licence to allow no Jew to live within the town or set up residence.[10] The king may have got the cemetery in return for cancelling Jewish debts owed by the crown. 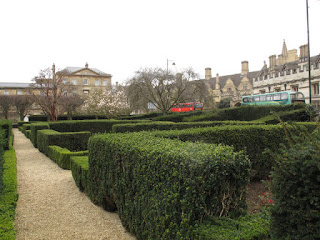 The new site for the Hospital was on the north side of the road while the Jews retained an area measuring 300 feet by about 80 or 90 feet on the south side.[11] The road mentioned was from East Gate to East Bridge and passed through what was formerly the garden of the Jewish burial ground. This road through the Jewish cemetery was not made to single out the Jews. Other cemeteries in Oxford also had roads running through the middle of them such as the cemeteries of St. Peter in the East and St. Mildred’s.[12] Medieval cemeteries didn’t enjoy the same reservation of space as in modern times. John de Farendone had grazing rights of grass and pasture in the cemetery belonging to the Hospital on the north of the road.[13] Elsewhere, in 1259 William de Dene kept his winter wheat within the cemetery of Dean (in the Forest of Dean, Gloucestershire) in the custody of his executors.[14]

In 1279 the cemetery on the south side of the road was still used by the Jewish community but not for too long more. After the attacks on the Jews in the reign of King Richard, a separate royal court of justice was established to regulate Jewish loans while continuing to allow access to the ordinary courts.[15] In April 1286 letters patent were issued to allow the Chancellor of Oxford University to try cases between Jews and Oxford clerks.[16] The move away from exclusive royal protection was a sign of things to come. On 18th July 1290 King Edward issued the Edict of Expulsion of all Jews from England. The Edict forced the Jews of England to leave the country while the crown, then deeply in debt, seized their property to pay debts and fund wars in Scotland and France.[17] There was also a local rejection of the Jewish community around that time. In June 1290 Henne, wife of James of Oxford, a Jew, was accused of forging the seal of Oseney abbey in favour of Jewish property.[18]

It was only in the 1650s, during the Commonwealth under Oliver Cromwell, that Jews were allowed to resettle in England. By that time the Jewish cemetery in Oxford was long gone and the abode of the dead was built over by houses for the living. The site of the Jewish cemetery is today (2018) occupied by Magdalene College and the Botanic Gardens and a small tablet marks the former cemetery.[21]