Curry Rivel is a village and parish east of Taunton in Somerset on the road to Langport. The ‘curry’ name is from old British for a stream.[1] Other sources say that Curry comes from crwy which in Celtic means a boundary.[2] At the Norman Conquest in 1066 Curry Rivel was part of the royal manor of Curry. After 1066 some of the manor was parcelled off to form the manor of North Curry. Also some waste land in Curry Rivel was transferred to the manor of Capland. Other parts of the original royal manor of Curry included Stocklinch Ottersey, Stocklinch Magdalene and Hambridge. In 1084 the area later known as Curry Rivel was called Ablata de Churi. The church of Curry Rivel was held by King William while the land was held by the Comte de Moretain (King William’s half-brother) and Britell de St. Clair was the subtenant.[3]

Richard Rivel came to prominence in the reign of King Henry II. In the 26 Henry II he was constable of Kaermerlin castle. By 1166 Richard Rivel held the manors of Langport and Curry Rival in Somerset by the service of two knight’s fees and part of a single fee held by Muchelney Abbey.[4] In 1209-12 Richard Rivel was a witness with William de Montacue of an acknowledgement by Henry de Careville that he and his tenants should do suit at the hundred-court of Bruton.[5]

In about Easter 1210-1 Richard Rivel (represented by Jacob son of Widone) and the Abbot of Muchelney (represented by Robert de Dillurton) went to court at Westminster concerning a knight’s fee that the abbot claimed from Richard on the manor of Dunheved. Richard Rivel acknowledged that he owed the abbot and his successor’s two parts of a knight’s fee in money (five parts add up to one knight’s fee). For this the abbot quit claimed all arrears but made known that if arrears should arise in the future that the abbot could enter Dunheved and distain the tenement.[6]

Richard Rivel died by July 1213 but because of the Interdict imposed on England by the Pope, Richard Rivel was not buried until March 1215.[7] The Interdict was imposed and relaxed on 29th June 1214. On the last day of March 1215 the body of Richard Rivel senior was buried before the altar of the Holy Cross in the greater church of Muchelney Abbey. On the same day Richard Rivel junior granted the Abbey one mark payable yearly by Richard le Bule from the land of Andredeschie in Curry Rivel. This money was for prayers for the soul of his father and mother and his ancestors and heirs.[8]

In March of April 1221 Fulk de Bréauté wrote to Hubert de Burgh, justiciar of England, about the difficulties he was having provision Plympton castle. Fulk de Bréauté cited a number of magnates in Cornwall and Devon as most unhelpful. These included William Briwere, Robert de Courteney, W. de Torintone and Richard Rivel.[9]

In about August 1222 the sheriff of Somerset was ordered to make a “diligent inquisition” on how much land Richard de Rivel held in the county in chief of the king. The results of the inquisition were to be sent to Hubert de Burgh, justiciar of England by Michaelmas 1222. The sheriff was further to cause Sabina de Rivel, daughter and heiress of Richard de Rivel, and her husband, Henry de Ortiay, to have full seisin of the estate after the king accepted security from them to render their relief fine.[12]

In 1224 Henry de Ortiay pledged 20 marks for the fine of £100 which Walter de Goderville owed the king because Walter had joined in rebellion with Fulk de Bréauté.[13]

In 1226-7 Richard de Oylli claimed two parts of three virgates of land in Hembrige against Henry de Ortiay (Ortiaco) and his wife Sabina. Richard further claimed one third part of the same three virgates against Mabilia, wife of the late Richard Rivel (her dower third). The court found that Richard had no claim and he quit claimed all his rights. For this Mabilla gave him ten acres of tillage land to the west of Hunnesworth to hold for her life and after her death to retain eight acres to hold of the heirs of Henry and Sabina.[14]

In September 1231 King Henry III ordered the sheriffs of Devon and Somerset to take into the king’s hand the lands of Roger de Gouiz and Henry de Ortiay and to hold until further notice.[15]
In about April 1237 Henry de Ortiay paid a fine of 20 marks to the king to have a licence to enclose a wood and make a park at Curry Rivel. An error in the Exchequer wrote this fine as 100 marks and Henry III had to correct the amount to 20 marks.[16]

As well as holding the inheritance of his wife in Somerset and Dorset, Henry de Ortiay held other property in Dorset for life. One of these places was the manor of Charborough (worth £10 17½d) which he rented from the crown. After his death the manor was granted for life in 1242 to Richard Marshal on condition he pay the crown 5 marks 17½d per year.[17]

In about May 1242 King Henry III wrote to the sheriffs of Counties Somerset and Dorset that he had taken the homage of Sabina de Ortiay for that lands that her former husband, Henry de Ortiay, held in the two counties from Sabina’s inheritance. The sheriffs were to give Sabina de Ortiay full seisin of her lands. Furthermore they were not to pursue Sabina for the scutage she owed the king from her knight’s fees due on the king’s crossing. This scutage had been remitted by the king.[18] 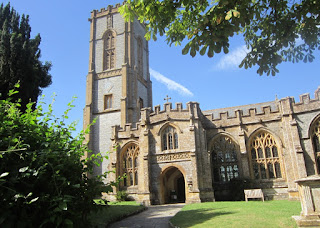 Church of St. Andrew at Curry Rivel by Angela Davage

In 1310-11 Henry de Ortiay (Urtiaco) and his wife Mabilla (elsewhere called Sybilla) acknowledge that the manors of Curry Rivel and Langport with the advowson of Curry Rivel were of the right of Geoffrey de Putteneye. In return Geoffrey granted the manors and advowson to Henry and Mabilla for life, to hold in chief of the king.[22]

In the time of King Edward III the lands of Putney Lorty passed to John Gunter by way of his wife, Elizabeth, daughter of Sibylla, and granddaughter of John de Ortiay. Meanwhile the lands of Curry Rivel, Stock Trister, and Cucklington were said to have fallen to the crown and that subsequently King Edward granted these lands to William Monte Acute, Earl of Salisbury.[23] The new owners did not enjoy these former Ortiay properties in peace. In 1340 John de Molyns (holder of Stock Trister) complained that Sir James Lovel, John de Mildeneye, parson of Curry Rivel and Richard Lorty with others broke into the park at Stock Trister and removed deer.[24] In the same year of 1340 the parson of Curry Rivel, with others, assaulted Thomas Marleberge as he tried to collect the ninth value of wool, sheaves, fleeces and lambs in Somerset due to the king.[25]

It is not clear why John de Ortiay sold much of the Rivel inheritance. Maybe he was short of cash and needed the money or he had support Queen Isabella ad Mortimer against Henry III. Not everyone was happy with the sale and Henry de Ortiay of Swell lodged a claim in the king’s court for the property but his claim was rejected.[27] Yet even with its new owner the family name of Rivel was kept for the place-name of Curry Rivel as it still does nearly a thousand years later.