Lisnakill civil parish lies about four miles to the west of Waterford city just south of the old Waterford to Kilmeaden road. The parish is about 2,462 acres in size and contains a number of ancient monuments, like a pit burial at Lisnakill and earthworks at Pembrokestown, showing that the area was lived in from earliest times.[1]

This motte, like others, was a flat-topped earthen mound with a fosse around its base. The earth from the fosse possibly supplied the earth for the motte. On top of the motte was possibly a timber framed castle. Although the motte at Pembrokestown is smaller than the other mottes found in County Waterford, its location only a few miles west of Waterford city would have added to its defence capabilities.[2]

The civil parish of Lisnakill was located within the medieval diocese of Waterford. In the ecclesiastical taxation of 1302-6 Lisnakill was valued at 31 shilling which at a ten per cent tax rate gave a tax amount of 3 shillings 1¼ pence.[3]

Only the foundation layers of the east, north and south walls survive. The west gable wall is entirely missing. There is a destroyed doorway in the south wall. A stump of a tower or cell occupies the western quarter of the church. A stoup seen by Canon Power is now missing while parts of a twin-light ogee-headed window lie scattered in the graveyard. The family vault of the Sherlock family of Butlerstown is in the graveyard.[4] 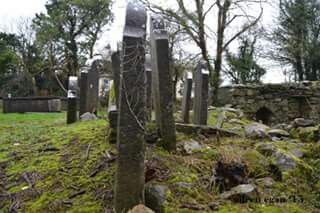 The rector of Lisnakill was the treasurer of Waterford cathedral. He appointed a vicar to serve the needs of the parishioners. A few names of these vicars survive in the records. John Ycormichain was the vicar in the first half of the fifteenth century while Rory Ocomayn was vicar in 1470 and Gilbert Oarnan was the vicar in 1498. The medieval vicar was possibly assisted by a curate but no names of such people survive until the eighteenth century.[5] It may be the case that the parish was too poor to employ a curate as in 1470 when Rory Ocomayn, priest of the diocese of Lismore, was appointed vicar of Lisnakill (worth 5 marks), he also became vicar of Kilmeaden parish (worth 7 marks) the revenues of Lisnakill were too slight to maintain a vicar and so he need the two parishes to have a decent income.[6] The two parishes were next door to each other (Lisnakill being two miles south of Kilmeaden) and so could easily be served by one vicar.[7] In 1498 Gilbert Oarnan (from the diocese of Killaloe) also requested two parishes, Lisnakill and Reisk, so as to have a decent income.[8]

In the three years and thirteen weeks between 1331 and 1335, John Moricz, the escheator of Ireland, received £1 in rent from 20 acres of land at Lisnakill. This rent worked out at 6 shillings 8 pence per year. Between March 1335 and August 1336 John Moricz collected 10 shillings in rent for the 20 acres.[10]

In 1324, John Darcy, Justiciar of Ireland, called for an army to be assembled at Tylagh, and for those who were liable to pay for the army to do so. John de Pembroke and Matilda de Crounstoun were liable for £1 to pay for half a service. This amount was still due in 1326. But they were, like many others, slow to pay up and the amount was still due in 1335.[11] Another person who didn’t pay the service for the army was Henry de Whitfield.[12] It is possibly that Henry, or some relative, gave their name to the townland of Whitefieldstown, in the parish of Lisnakill.

After the mid fourteenth century Lisnakill landowners disappear from the records. When the parish re-emerges in the seventeenth century it is held by local landowners and business people from Waterford city looking for a country retreat. In 1640 the parish of Lisnakill contained four ploughlands and a third of same across five townlands. These townlands and their registered proprietor were; Doonyn (Nicholas Madan of Doonyn), Whitefieldstown (Peter Dobbyn of Waterford), Lisnakill (Sir Thomas Sherlock), Pembrokestown (James White of Waterford) and Gaulstown (the same James White).[13]

The area and value of each townland in 1640 was:

Doonyn was measured at one ploughland of which 206 was profitable acreage. These acres were divided into 2 acres of meadow (4 shillings), 197 acres of arable and pasture (£14 7shillings) along with 7 acres of furze and mountain (3 shillings 6 pence). The total value of the townland was £14 14shillings 6 pence.[14]

The townland of Lisnakill was measured at one third of a ploughland and had 127 profitable acres. These profitable acres were divided into 121 acres of arable and pasture (£9 1shillings 6 pence) along with 4 acres of furze and mountain (2 shillings). The total value of the townland was £9 3shillings 6 pence.[16] Within this townland was situated the old parish church of Lisnakill and a much older pit burial mentioned earlier.[17]

Pembrokestown was measured at one ploughland of which 26o was profitable acreage. This profitable acreage were divided into 253 acres of arable and pasture land (£18 19shillings 6 pence) along with 7 acres of furze and mountain (3 shillings 6 pence). The total value of the townland was £19 3shillings.[18] It was this townland which took its name from the Pembroke family that held Lisnakill parish nearly four hundred years before the civil survey.

Gaulstown was measured at one ploughland with 397 profitable acres. These profitable acres were divided into 193 acres of arable and pasture (£14 3shillings) along with 18 acres of furze and mountain (9 shillings) and 122 acres of bog (£3 1shilling). The total value of the townland was £17 13shillings.[19]

The medieval landowners of Lisnakill parish may not have lasted long in the surviving documents but they live on in the landscape. The townlands of Pembrokestown and Whitefieldstown preserve the Anglo-Norman names of Pembroke and Whitefield for nearly eight hundred years. The townland of Gaulstown refers to the townland of the foreigners which is usually is taken as meaning the Vikings and so takes the memory of Lisnakill residents back maybe a thousand years. We may live in a modern world but the ancestors live long among us.