Tullaghorton civil parish lies in the barony of Iffa and Offa West on the southern boundary of Tipperary with County Waterford. Indeed the southern boundary of the parish is the county boundary. The parish contains 2,905 acres consisting of good tillage ground and the northern slopes of the Knockmealdown Mountains where peat was formerly harvested. The name Tullaghorton means Ortan’s Height but the long passage of time has obliterated the memory of who was Ortan.[1] The rectory and vicarage of the parish was long attached to Lismore cathedral where the rectory formed one of the permanent prebend parishes and the vicarage was in the patronage of the bishop. The rector, called the prebendary, was a canon in Lismore cathedral and collected most of the parish tithes for his own use. The vicar received a portion of the tithes for which he performed most of the spiritual needs of the parish and was usually in residence.[2] 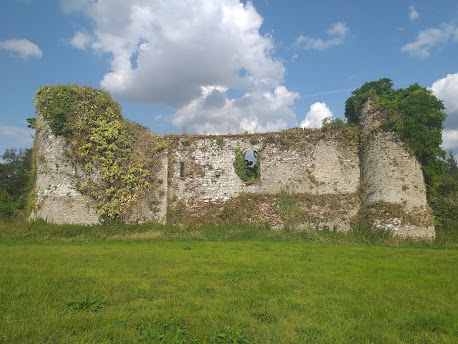 Castlegrace castle - NW of the church

Before the Norman invasion of 1169 southern Tipperary and County Waterford formed part of the kingdom known as Déise Muman. As Tullaghorton lies at the north end of a north-south valley leading up through the Knockmealdown Mountains from Lismore at the southern end, the parish could have formed part of the property of the medieval bishops of Lismore. Prebendary parishes sometimes, though not always, were formed out of areas where the local bishop was the majority landowner such as at Clashmore, Donoughmore and Dysert/Killotteran. On the other hand the parish may have been formed by the person who built the early thirteenth century castle at Castlegrace which lies to the south-west of the parish church. The castle builder (Philip of Worcester), or his successors, could have granted the parish to Lismore cathedral to form a prebendary parish.

In 1185 King John commissioned the construction of castles at Ardfinnan and Tibberaghny seemingly to protect the northern boundary of Waterford with Philip de Worcester holding the former and William de Burgh the latter.[3] Philip de Worcester gained possession not just of Ardfinnan but the surrounding cantred of Ardfinnan, later called Offa, which included the future parish of Tullaghorton along with other parts of modern County Tipperary. In 1194-1204 Philip granted various places in Offa to Gerald FitzMaurice.[4] In 1225 William of Worcester was granted four cantreds in Tipperary, including Offa, which were previously held by his uncle.[5] It is possible that William enlarged the castle built by Philip at Castlegrace. The south-west tower and two-thirds of the west wall are of earlier date to the north-west tower with a clear division line showing on the western wall. Perhaps the dispassion of Philip de Worcester by King John in 1201 prevented Philip from finishing Castlegrace.[6] In the fourteenth century Castlegrace was owned by the Butler family and remained part of the estate of the Butler’s of Cahir castle until the nineteenth century. In the 1830’s the seneschal for the Earl of Glengall still held manorial courts in the parish.[7] The Grubb family, who lived in nearly Castlegrace house, turned the castle into a walled garden in the early nineteenth century. 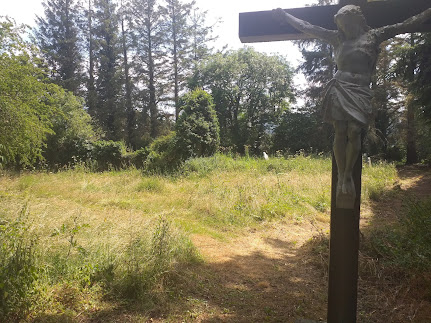 The parish church of Tullaghorton lies in the centre of a roughly rectangular graveyard in the townland of Castlegrace. The masonry of the church appears to be thirteenth century with window embrasures from the fourteenth or fifteenth century. The church was dedicated to St. John the Baptist but it is unknown how old the dedication is. The rectangular graveyard would suggest a Norman establishment as earlier church sites were located in circular enclosures. The external dimensions of the church are 21m East-West and 6.5m North-South with walls 0.86m thick and extending to 3m in height. Canon Patrick Power considered the church to be over average in size and this possibly is fitting for a prebendary church attached to Lismore cathedral.[10] The gable ends are intact but the west gable is titling outwards. The north wall is runs the full length of the building but varies in height. The south wall survives only at the east and west ends with a large part of the central section reduced to near foundation levels. The west gable has a flat-headed single light with limestone and sandstone jambs and an external chamfer. The east gable has a two-light ogee window with a largely missing central mullion. The window has an external chamfer and internal rebate with inward spraying embrasures.[11] The east window is not centrally placed in the gable end being about a quarter meter towards the north-west corner.

The north wall has a doorway about 7m from the west gable with only the lower doorjamb stones surviving. The opposite south doorway is much destroyed with only traces of the west doorjamb. At the east end of the north wall (about 2.5m from the east gable) is the remains of a window much destroyed. The south wall has an opposite window with surviving embrasure of the west side but in both cases the window itself has been broken out.[12] The interior of the church is much overgrown and so it is difficult to see if any church features remain or if any obvious division separated the nave from the chancel area.

The roughly rectangular surrounding graveyard, which extends slightly in the north-west corner, is separated from the public road its north side by about 21m of land forming part of the surrounding field and passageway. A single story house with a chimney in the east gable stands to the east of a gateway leading to the graveyard. The house was possibly used as a guard house for the graveyard to prevent body snatchers.

Sometime before 1449 John Iffyrnussii (also spelt Yhynnous) held Tullaghorton prebend and a canonry in Lismore cathedral until his death. He was succeeded by David O’Dubly as prebend with Maurice O’Ronan as vicar. Maurice was also vicar of the neighbouring parish of Tubrid. In April 1449 Maurice petitioned Rome that David O’Dubly had committed perjury and simony while prebend of Tullaghorton and had dilapidated the goods of the parish for his own use. The abbot of Mothel was asked to investigate the matter, and if true, grant the canonry and prebend to Maurice.[14] These accusations were a standard formula before about 1480 for one cleric to deprive another of a parish or cathedral position. At this distance from the events of 1449 it is impossible to say if the accusations are truthful or false. Considering that the next petitioner for Tullaghorton made no mention of David O’Dubly or Maurice O’Ronan it is possible that the accusations were false and Maurice Stack didn’t want them to weaken his own case. In 1449 the value of the canonry and prebend was five marks while the united vicarage was eight marks.[15] 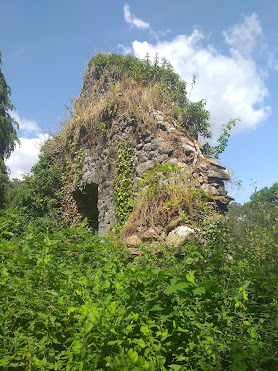 East gable from the south

In October 1468 Maurice Stack, a cleric of Ardfert diocese, petitioned Rome for Tullaghorton, which was then worth six marks. Maurice said that he was given Tullaghorton a few years before 1468 by the bishop of Lismore and that this was confirmed by Rome as a successor to John Iffyrnussii. But, by a provincial statute in the archdiocese of Cashel, Maurice’s title was unsound and he petitioned Rome to again confirm him to the parish.[16] The said statute was that a month after its publication, the diocesan clergy were to put away their concubines. Yet Maurice Stack opening lived with his woman for several years and had children by her. Now by October 1468 Maurice had separated from his woman and wished to get papal confirmation that he could continue to hold Tullaghorton. The archdeacon of Lismore was to absolve Maurice of his sins and, after some penance, confirm the canonry and prebend.[17] In 1480 it was said that Maurice Stack held Tullaghorton for seventeen to eighteen years.[18]

In the 1470s Gerald John Fitzgerald is said to have held the prebend of Tullaghorton, with the canonry in Lismore cathedral. Shortly before 1480 Gerald resigned Tullaghorton on entering religious orders.[19] In the summer of 1480 it was said that the archdeaconry of Lismore (unlawfully held for nine to ten years by James Tobin) and Tullaghorton prebend (held by Maurice Stack) were both vacant and there collation had fallen to Rome. William Mandeville, a clerk of the diocese and lately dispensed by Rome as the son of a knight and an unmarried woman, petitioned for the two benefices.[20] The archdeaconry of Lismore was worth thirty-four marks and the prebendary worth only six marks with its canonry in Lismore cathedral.[21] The abbots of Fermoy and Bridgetown along with John White, a canon in Cloyne diocese, were to judge who had proper claim.[22] It would appear that William Mandeville was successful and acquired both benefices.

Sometime before April 1489 Walter Butler, a cleric in the diocese of Lismore, was given dispensation by Bishop Thomas Purcell to receive minor orders and hold a benefice on account of Walter’s illegitimacy as the son of a married man and an unmarried woman. Afterwards the bishop granted Walter a canonry in Lismore cathedral and the prebend of Tullaghorton which was vacant for several years. Walter Butler said he received only a small portion of the parish tithes as the larger part was collected by William Mandeville, the former holder of Tullaghorton (the prebend then worth ten marks). In the spring of 1489 Walter Butler petitioned Rome for redress. In April 1489 the pope appointed three judges, the abbot of Mothel Abbey, the dean of Ossory and William O’Morrissey, a cleric of Ossory, to adjudicate on the matter and give Tullaghorton to Walter if everything was in order.[23] It would appear that Walter Butler was unsuccessful at acquiring the prebend and was instead given the position of vicar of the two parishes of Tubrid and Tullaghorton along with a canonry in Lismore cathedral. But Walter was still unsatisfied and in 1494 again petitioned for the prebend while seeking to retain the joint vicarage.[24] It is not known if Walter was successful as paying the first year of parish dues to Rome, the annatis, was no guarantee of longer term acquisition and retention. After Walter Butler there is a long gap in the records until 1588 when the Edmond Prendergast held the prebendary while James Butler was vicar of Tullaghorton.[25]

In the centuries after the Protestant Reformation, Tullaghorton was retained as a prebend parish with a prebendary seat in Lismore cathedral. The church building and the adjoining land became the property of the new Church of Ireland. With few Protestant parishes, and a lack of desire on the part of the new clergy to retain standing structures, the medieval church was allowed to fall into ruins. In 1836 the prebend of Tullaghorton was suspended on the resignation of William Stephenson. Later Rev. John Jackson was elect by the cathedral chapter to fill the unendowed stall but when Jackson died in 1872 the prebendary was allowed to lapse.[26] In 1836 the vicarage of Tullaghorton was also suspended with the vicars of neighbouring Shanrahan serving the parish. In 1871 Tullaghorton vicarage was formerly united to Shanrahan parish.[27] In the reorganisation of the Catholic Church in the eighteenth century Tullaghorton was joined with the neighbouring parishes of Tubrid, Whitechurch and part of Rochestown around 1750 to form the new parish of Ballylooby and Tubrid.[28] 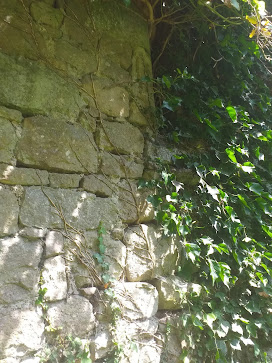 Rev. W. Rennison, Succession list of the Bishop, Cathedral and Parochial Clergy of the Diocese of Waterford and Lismore (1920), pp. 151-2

[13] Rennison, Rev. W., Succession list of the Bishop, Cathedral and Parochial Clergy of the Diocese of Waterford and Lismore (1920), p. 232

[25] Rennison, Succession list of the Diocese of Waterford and Lismore, p. 152

[26] Rennison, Succession list of the Diocese of Waterford and Lismore, p. 60

[27] Rennison, Succession list of the Diocese of Waterford and Lismore, p. 152