The tower house at Dunhill lies in the townland of Dunhill in the parish of Dunhill which is in the barony of Middlethird, County Waterford. Dunhill tower house is situated at the tip of a spur of a high ridge bounded on the east by the Annestown stream and bounded on the west by another stream in a ravine. The name Dunhill was spelt Donoil in medieval times from the Irish Dun Áil which means fort on the cliff. The rectangular tower house with a base batter measures 10.5m E-W and 9.55m N-S and survives to first floor level on the west side. The corners still display some cut stone quoins to first floor level. The first floor displays few architectural features except for traces of embrasures on the north, south and west walls. The ground floor chamber has three embrasures (one with a wicker centering) with the lights largely destroyed.[1] 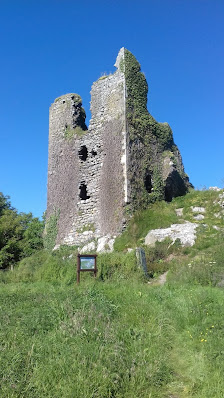 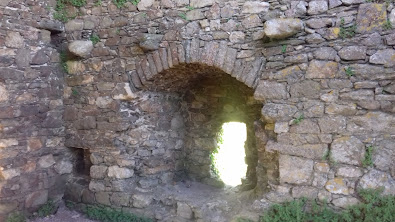 Interior of north wall at Dunhill

The area around Dunhill was given to the Power or le de Poer family in the late twelfth century and became the caput of Robert le Poer, the senior of three brothers who came over from Somerset in England to colonise Ireland after the Norman invasion. Robert le Poer (d.1177) was succeeded by Robert (d.1228). In the early thirteenth century King John granted the barony of Dunhill to Henry le Poer, son of Philip le Poer of St. Laurence in Pembrokeshire.[2] This appears to be one of those speculative grants by King John. Later Robert le Poer, son of the first Robert le Poer, recovered Dunhill. Robert le Poer was the father of John (d.1243) who was the father of John II (living 1260) and Robert (d.1249).[3] The family possibly built a small castle on the site of the later tower house or somewhere in the locality. John II le Poer was the father of Peter and Matthew (ancestor of the Power family of Curraghmore). Peter le Poer was described as baron of Donoil in 1283 when he died from drowning while crossing the Irish Sea to Wales leaving a two year old son, John III as his heir.[4] In 1305 John III fitz Peter le Poer, baron of Dunoil, was appointed sheriff of Co. Waterford.[5] During the period 1307-1314 John le Poer, baron of Donoil, received £100 for sending troops to Scotland to fight for King Edward II.[6] John III le Poer (d.1329) was the father of Peter (d.1328) and John IV. Peter le Poer (killed in the Desmond wars) was the father of John V le Poer (d.1361) who came of age in 1344 and was exiled to France with the Earl of Kildare.[7] 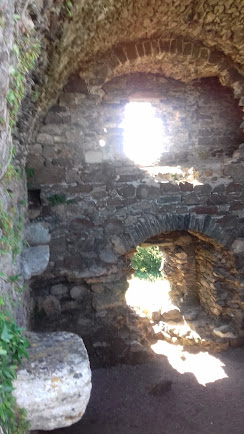 Interior view of the west wall at Dunhill

John V le Poer was the father of Eustace le Poer (d.1355) and Ismania le Poer, wife of Nicholas de Bekensfield. In 1361 Nicholas de Bekensfield was a follower of Lionel, Duke of Clarence, when the latter came to Ireland.[8] Although Nicholas de Benesfield was married to Ismania le Poer he took little interest in his Irish property being described in 1368 as an absentee landlord. With the failure of male heirs Dunhill and the baronage of Dunoil passed to the heirs of John IV le Poer through his son, Eustace and grandson John VI le Poer who 1375 was named baron of Donoil.[9] It is said that the Powers of Dunhill were killed in battle at Tramore in 1368 and so the estate passed to the Kilmeaden branch of the family. Instead it was a combination of the male heirs dying out at Dunhill and Bekensfield losing Dunhill because he was an absentee landlord. In 1380 Nicholas FitzJohn le Poer of Kilmeaden, a descendent of William le Poer (living 1172 and brother of Robert of Dunhill) was summoned to the Irish Parliament as Nicholas le Poer of Kilmeaden, feudal lord of Doniol.[10] 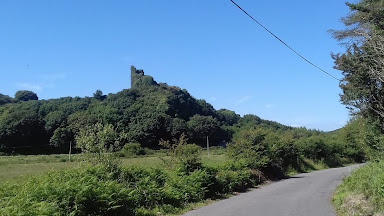 View of Dunhill from the south

Dunhill was given to a junior branch of the Kilmeaden family. Although east Waterford had many different Power family’s claiming descent from the three brothers of the time of King Henry II, the genealogy of these families is unclear until Tudor times. In the 1420s Milo le Poer (also called Power as the surname changed form), baron of Dunhill, was one of the collectors in County Waterford of a parliamentary subsidy granted to the lord deputy.[11] In the mid fifteenth century the male lineage of the barons of Dunhill ended with Milo le Poer as the last baron. Milo was succeeded at Dunhill by his natural son, Nicholas le Poer. By 1463 Nicholas had six sons (William, Maurice and Robert along with Piers of Gilcagh, Thomas and Nicholas), possibly from two marriages, who had administration of the Dunhill estate. In 1493 the six sons were sort of administrating the estate as they challenged a grant they made in 1463 of property in Islandikane and Ballydermody to William Wyse. An act of parliament in 1493 gave the land in question to William Wyse which was reconfirmed in 1528 in opposition to Nicholas Fitzthomas le Poer (son of one of the six brothers).[12] A trustee of the 1528 settlement was Nicholas Power, lord of Kilmeaden.[13] 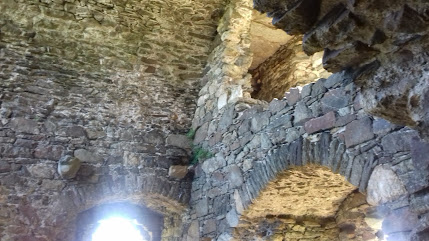 View of the south-west corner at Dunhill

In the decades around 1500 somebody of consequence built the present tower house at Dunhill. In the sixteenth century the Power family at Dunhill seems to have kept a low profile as they are rarely mentioned in the records. In the 1570s Robert Power of Kilmeaden was listed among the principal gentlemen of County Waterford with no reference to Dunhill.[14] In 1617 Nicholas Power held Dunhill castle and the surrounding estate.[15] In 1640 John Power held Dunhill castle (more correctly referred to as a tower house). John Power held a court leet and a court baron on his manor of Dunhill and was owner of about half the parish of Dunhill with further property in adjacent parishes. The same John Power also held the Kilmeaden estate of his ancestors. Although he held the manor courts of leet and baron at Kilmeaden the estate was left neglected as the tower house there was in ruins.[16] Have said that in 1646 when John Power was given freedom of Waterford city he described himself as John Power of Kilmeaden.[17] 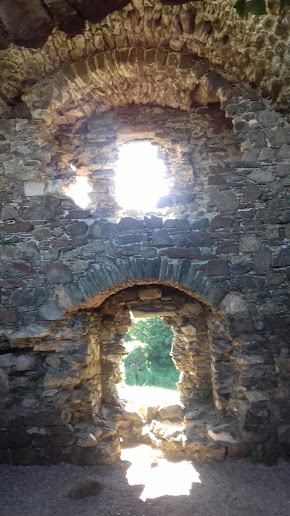 The Dunhill tower house fell to Cromwellian forces in 1649-50 and was possibly partly destroyed. Legend says that Lady Power was in command of the defences and gave a gunner buttermilk instead of beer, and in disgust, the gunner opened the gates and left in the Cromwellian soldiers for which act he was rewarded by being hanged. In later times some of its stone work was removed to build houses in the locality. In 1912 a storm caused much of the east side of the tower to collapse. 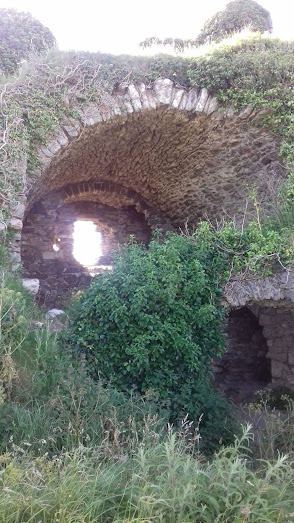 The open east side of Dunhill

Charles Smith said that the Act of Settlement of 1666 restored John Power to his property at Dunhill but the estate later passed out of the family.[18] Other sources say that John Power lost all his property and none of it was restored Under Charles II.[19] Sir John Cole acquired the Dunhill estate while Henry Nicoll received the Kilmeaden estate. John Power does not appear in the list of transplanted landowners and appears to have stay in east County Waterford. It is said that John Power of Dunhill had at least three sons; William, Pierce and Nicholas but the genealogists differ on this. William Power was grandfather of William Power of Knockaderry (part of the old Kilmeaden estate) which property was held by leasehold as the family remain Roman Catholic, and ancestor of the Power family of Bellevue House near Slieverue and Faithlegg House, south-east of Waterford.[20] In the 1850s Rev. John B. Palliser was the owner of Dunhill. 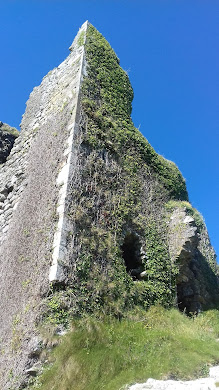 The south-west corner of Dunhill 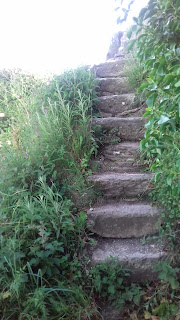 Steps up to the south-east bawn 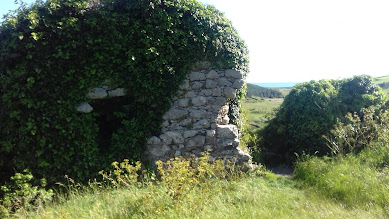 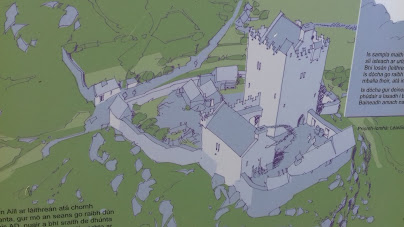 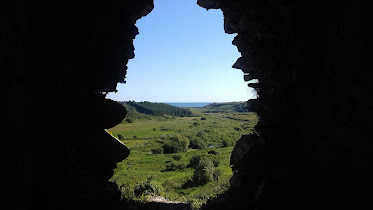 View south to the sea at Annestown 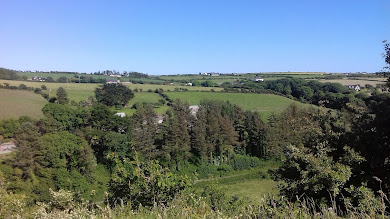 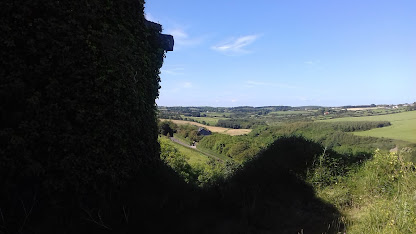 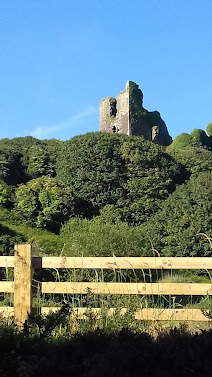 View of south-west corner from the cliff base 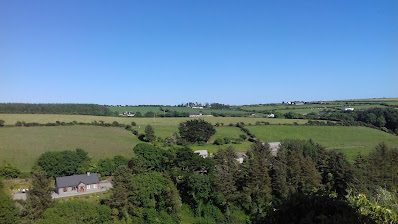 Another view eastwards from Dunhill 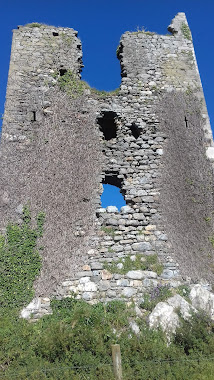