Wollaston is a village and civil parish in Northamptonshire, about 3 miles south of the market town of Wellingborough.[1] On Wednesday before the feast of St. Peter in Cathedra in 1346 Thomas de Berkeley of Wollaston in Northampton died. Wollaston was not an original property possessed by Thomas de Berkeley but was inherited from his wife, Margery de Bray.[2] The history and owners of Wollaston manor appear in the fourth volume of the Victoria County History of Northampton. This article explores additional information about the owners. 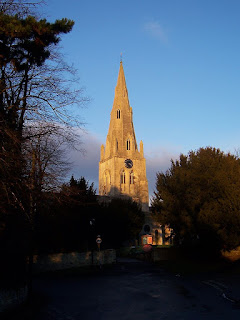 In 1260 William de Bray acquired a charter from Henry III to hold an annual Michaelmas fair at Michaelmas in Wollaston along with a weekly market to be held on a Tuesday.[4]

In June 1254 the people of Wollaston were accused of interfering with the bailiffs of the royal forest of Saucey in Northamptonshire. An enquiry was order to determine the facts.[5] In March 1263 it was agreed by royal letters patent that Wollaston and Stricston were outside the bounds of the forest of Saucey in Northamptonshire and therefore not the people of Wollaston were not subject to forest law.[6]

In 1286 Edmund, the king's brother, obtained the manor of Wollaston and its two knight’s fees from William de Cogenho, along with the homage and service of William de Bray.[7]

Sometime before 1297 Robert de bray succeeded his father, William de Bray to the manor of Wollaston. In 1297 Wollaston was held by Edmund, the King’s brother, as a property held under the manor of Hegham Fereres in Northamptonshire. At Wollaston and Strixton, Sir Robert de Bray held two knight’s fees of the honour of Chokes from Edmund.[8]

In 1305 Robert de Bray settled the manor of Wollaston on himself and his wife Mary with remainder to Thomas the son of Thomas de Berkeley, and Margery his wife (daughter of Robert).[9] In March 1327 Robert de Bray paid 1d in rent for Wollaston to Thomas, Earl of Lancaster.[10]

As the second son Thomas de Berkeley did not inherit the main Berkeley properties. Instead he was provided with other lands. Before 1300 he received Coston in Leicestershire and Eynesbury in Hunts. These properties had come to the Berkeley family via his mother, Joan de Ferrers. In 1260-62 Joan had received Coston from his brother Robert de Ferrers for herself and her issue at a rent of 100 gold threads. This grant was witnessed by among others; Sir Roger de Quincy (Earl of Winchester), Sir Richard de Clare (Earl of Gloucester) and Sir Simon de Montfort (Earl of Leicester). The manor of Eynesbury came to Joan de Ferrers from her mother, Margaret de Quincy, one of the three daughters and heirs of Roger de Quincy, Earl of Winchester.[12]

In 1303 and 1304 Thomas de Berkeley along with his brothers, Maurice and John were witnesses to a number of deeds concerning Thomas de Assleworth and Kingswood Abbey. In 1301 he witnessed a deed between Kingswood Abbey and his brother, Maurice de Berkeley.[13] Sometime before 1310 Thomas de Berkeley married Margery, daughter and heir of Sir Robert de Bray and had a daughter Katherine. Margery brought Thomas the manor of Wollaston and this manor passed to their daughter Katherine.[14]

Margery de Bray died before 1318 and in that year Thomas de Berkeley of Wollaston married secondly to Isabel, daughter and heir of Sir John Hamelyn of Wymondham in Leicestershire. In June 1318 Thomas de Berkeley granted his son Thomas and Isabel the manor of Wick in Arlingham, a holding at Hartpury and a rent of 10 marks from Arlingham fisheries in Gloucestershire as a marriage gift.[16] Sir John Hamelyn was alive in 1307 when he witnessed a deed concerning Burley in Rutlandshire.[17]

Thomas de Berkeley of Wollston died in 1346 as said and was succeeded at Wollaston by his daughter Lady Katherine de la Dale who was aged 36 years when her father died. Lady Katherine married secondly to Richard Chamberlain.[20] But, before Lady Katherine could enter into her inheritance, the crown had to have its say.

After the death of any prominent person royal officials were sent to the chef properties of the individual to enquire if any royal dues were payable and if the heir was of legal age to inherit. If the heir was under age (21 years) the crown could hold the estate in wardship and collect all of its revenues. A long minority was a good day for the crown.

The first inquisition into Wollaston manor, held on 9th March 1346, said the manor was held of the king in chief by the service of one knight’s fee with 20s per year paid to the king’s castle of Northampton and 30s yearly to the sheriff of Northampton. The manor was in the fee of Chokes with the fees payable to Sir John de Molyns.[21] By this inquisition royal officials entered the manor to take the royal dues.

Richard Chamberlain objected to these royal officials and disputed the findings of the first inquisition. A second inquisition was held on 20th March 1346. It found that the manor was not held of the king in chief but held from the Earl of Lancaster by the service of 1d at Easter. In March 1327 Robert de Bray paid 1d in rent for Wollaston to Thomas, Earl of Lancaster.[22]

The 1346 jury didn’t know if the Earl held Wollaston from another or directly from the king. The 20s and 30s payment were due to the king and the sheriff of Northampton. A third inquisition was held at Hegham Ferers on 11th May 20 Edward III in which it was found that Wollaston was held of the Earl by the service of two knight’s fees and at a rent of 1d per year and the suit of court at the manor of Hegham Ferers every three weeks. The Earl of Lancaster held Wollaston directly of the king as of the fee of Choke. Consequently the king’s officials released the manor to Earl Henry.[23] 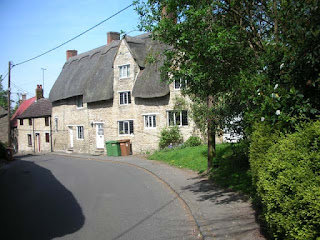 Wollaston street scene by Will Lovell

In March 1355 the king allowed Henry, Duke of Lancaster, to alienate in mortmain the manors Inglesham, Wollaston, Kynemersford and Cheddersworth to the hospital of the Virgin Mary at Leicester. At the same time the king allowed Henry a licence to create the hospital into a monastery with the same manors and advowsons.[24] In 1356 Henry of Lancaster granted Wollaston to the Dean and Canons of the new College of St. Mary at Leicester.[25] After the dissolution of the monasteries Wollaston manor was retained by the Crown until 1606 when it was sold to Thomas Marbury and Richard Cartwright in fee-farm.[26]

In November 1352 the king presented Thomas Oliver of Whishton to the vicarage of Wollaston on a voidance of the abbey of St. Mary de Pratis outside Northampton.[30]

In February 1438 John Fisher of Wollaston was given a general pardon for all treasons, murders, felonies, conspiracies and other offences.[31] In April 1445 John Lybbard and Stephen Andrews of Wollaston, husbandmen, were both charged with not appearing before the justice of the bench about a debt owed to Margaret Drayton.[32]

In 1461 Sir Thomas Tresham and his wife Margaret had 40s of free rent from Wollaston manor declared forfeit along with other property in Northamptonshire. An inquisition on 3rd November 1466 established his Northamptonshire property.[33]

Further information about Wollaston can be found in the fourth volume of the Victoria County History for Northampton of which abstracts can be seen at http://www.british-history.ac.uk/vch/northants/vol4/pp57-62