It was a widely accepted view up until the mid-nineteenth century that before the twelfth century mortared stone construction was unknown in Ireland until people like George Petrie disproved the theory.[1] This view was mostly based on the life of St. Malachy by St. Bernard of Clairvaux in which Malachy is said to have replaced his wooden church at Bangor with a ‘stone oratory, the first built in that land’. But this first ‘stone church’ appears more to refer to the first built in the Romanesque style of construction as a stone church already existed at Bangor since at least 1065.[2] The work by George Petrie showed that mortared stone churches were built in Ireland since at least the eight century although the vast majority were built after 900.[3]

It should not come as a complete surprise therefore to observe that in 1163 a lime kiln was built by Flaithbertagh, son of the bishop Ua Brolchain and the community of Colum-cille for the repair to Derry church.[4] The fact that the kiln was built to help in the repair of the church at Derry would suggest that this was not the first lime kiln built in the area.

Making lime mortar in medieval times could be done by a simple wicker kiln or by a purposely built kiln.[5] The 1163 kiln was built in twenty days which suggest that it was no small structure. The kiln was said to be 60 feet ‘on every side’ while the Annals of the Four Masters say 70 feet square.[6] What kind of structure was this lime kiln? Was it similar to the 18th and 19th century lime kilns you see around the country? By the measurements given the structure appears to be not dissimilar to later lime kilns. It is likely that the kiln was 10 feet by 6 feet or so which gives the size of 60 to 70 foot square. One of the most important aspects of the kiln was its ability to get temperatures above 900 degrees Celsius for a considerable time so as to burn the limestone into quicklime.[7] 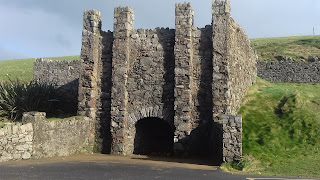 A few years ago the Centre for Archaeological Fieldwork at Queens University Belfast excavated a twelfth century lime kiln at Dundrum Castle. This kiln, which was oval in plan, had dimensions of 5.0m x 4.8m (about 16 feet x 16 feet). It was 5.1m deep and was built of stone bonded with clay. During the lifetime of the kiln the clay had become heat-damaged and was therefore quite fragile when excavated. The kiln had a flue at the base of the structure, to the south-east. After it went out of use the Dundrum kiln was deliberately back-filled and a coin found within the backfill was dated to the third quarter of the 13th century (Henry III).[8]

In 1164 the Derry lime kiln was no doubt put to use again to help build a tempull mór which was ninety feet long. In this construction the community at Derry was assisted by Muirchertach Ua Lochlainn, the high-king of Ireland.[9] Over the succeeding centuries many lime kilns were built in the Derry area and across the country. In 1462 a ferry near Lifford, Co. Donegal, was known as the Ferry of the Lime-kiln.[10]

The Derry lime kiln of 1163 was possibly not the first one built in Ireland but was of such local importance, and a marvel in their eyes, that it was recorded for posterity at a time when the dimensions of buildings were rarely given.[11] The existence of lime kilns in later centuries is assumed by the multiple number of mortared buildings across the country but few actual references to the lime kilns. The Derry lime kiln of 1163 is therefore not just of local importance but is of national importance.