A Drogheda merchant in Scotland in 1404

A Drogheda merchant in Scotland in 1404

Overseas trade across the waves of history has allowed countries to export goods and products they have in surplus in return for importing goods they don’t have. But trade between countries has its risks particularly in times of international tension or simple misinterpretation of the laws between the merchants and the local officials. In 1404 Thomas Walton, a merchant from Drogheda (within English area of control in Ireland), decided to take advantage of a recent truce between Scotland and England in March 1404 to do a bit of trading in Scotland and return with money or goods that he could sell in Drogheda.[1] But his trading mission didn’t go according to plan as local officials in Scotland had other ideas.

Thomas Walton of Drogheda is first mentioned in the surviving records in 1381 when he and John Asshewell of Drogheda acted as mainprize (or guarantors) for the abbot of Furness Abbey who was given custody of 1 carucate and 40 acres of land in Co. Meath.[2] The Walton family had a long association with Furness Abbey as in 1376 Robert de Walton and William Travers of Furness appointed Brother Roger, monk of Furness, and Thomas Skynner, burgess of Drogheda, as their attorneys in the manor of Beaubec in Ireland which Walton and Travers had rented from Richard de Preston of Beaubec.[3]

In 1389 a person called Thomas Walton got letters of general attorney under the name of John Drak but it is unclear he was our man in Drogheda or another Thomas Walton.[4] Meanwhile Thomas Walton of Drogheda received a boost for his merchant business before 1391 when the king allowed the burgesses of Drogheda to export old cloth, wool, hides and other wares including corn but not in the forbidden season.[5] Among the other members of the family to benefit from this opening of trade was John Walton, merchant of Drogheda, who in 1319 was trading with Flanders.[6] He was possibly the same John Walton who in 1408 was elected mayor of Drogheda.[7]

It is possibly that Thomas Walton of Drogheda was in his home town in January 1395 to see King Richard II of England and Lord of Ireland accept the homage and fealty of O’Neill the younger of Ulster and his people. King Richard was back in Drogheda in March 1395 to receive the homage of the lords of Meath and Breifne. Although the royal visit may have been good for the local economy, Thomas Walton was possibly hoping for the reopening of the export trade which was suspended before and during the royal visit.[8] 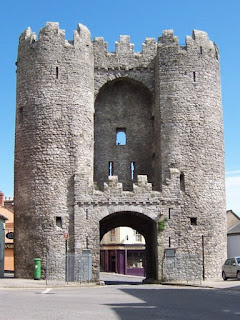 By the end of the fourteenth century Thomas Walton was a successful merchant of Drogheda with extensive overseas trade connections. It appears that Thomas Walton had a number of ships under his command as in a petition to the English government he said that he went to Scotland in March 1404 to trade in ‘one’ of his ships.[9]

In the wider Meath area other members of the Walton family appear in the records. In 1385 Joan, the widow of David Walton, succeeded to a house in Trim but William Walton claimed the property. A petition of Joan to King Richard II in November 1385 resulted in an order giving her custody of the house and barring William Walton from access.[13]

In 1399 the new Lancastrian king, Henry IV, seems to have established his control of Ireland, building on the work of Richard II but serious problems of rebellious Irish and poor royal revenues remained. By the end of 1402 royal soldiers, stationed at Drogheda, were demanding permission to return to England as their wages remained unpaid. In February 1404 Sir Stephen Scrope, lord deputy of Ireland, suddenly left the country without leaving any effective government and the poor royal revenues were insufficient to hire soldiers. By the spring of 1404, as Thomas Walton prepared to sail for Scotland, Ulster was in flames and the English settlers driven to the coast. Yet by August the Earl of Ormond had successfully restored the borders of Ulster.[14]

Meanwhile in March 1404 a truce was made between Scotland and England and Thomas Walton decided to take advantage of this to do some trading.[15] Yet the window for trade was short as in March 1406 Prince James of Scotland was kidnapped by the English and held captive for eighteen years (James succeeded as King James I of Scotland in April 1406 but remained uncrowned).[16] In 1424 James was married to Joan Beaufort, niece of Bishop Henry Beaufort.[17]

In the early fifteenth century Scotland conducted much of its overseas trade with the Netherlands and France as Ireland was part of the English dominions.[18] Yet some trade did happen between Scotland and Ireland although not always directly. In 1395 for example, a Waterford ship was hired by a merchant from La Rochelle to take wine to Scotland.[19] Scotland was not as safe place for Irish merchants.

After the truce between Scotland and England in March 1404 which was widely proclaimed on 26th March, Thomas Walton set sail for Scotland with various unspecified saleable merchandise. On arriving in the port of Loghrian (Lochryan) in the lordship of Douglas a group of armed men led by Alexander Campbell seized the ship and its cargo on the instructions of the abbot of Glenluce.[20] The cargo was worth 100marks.[21] It is not clear why the ship and goods were seized; anti-English feeling in Lochryan, simple thief or poor documentation. Thomas Walton appears to have been unsuccessful at getting redress in Lochryan and by November 1404 he sent a petition to King Henry IV of England seeking remedy. On 12th November 1404 the king’s council at Coventry drew up letters instructing officials to give help.[22] 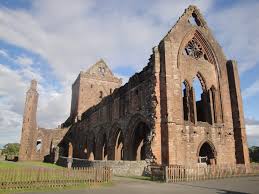 To help future trade and to aid the recovery of his ship and goods, Thomas Walton decided to get a licence from Henry IV to trade with Scotland. It is unclear if the problems at Lochryan were caused by Thomas Walton not previously securing a trading licence but the occurrence of the petition for remedy at the same time that Thomas Walton requested a trading licence give the possibly of a connection between the two events.

Much of Ireland’s exports in the medieval period were in the form of raw materials such as fish, timber, hides, wool and grain. The main period for grain exports was the thirteenth and early fourteenth century after which there was a serious decline. By 1437 Bristol was shipping grain to Ireland and by 1475 a ban was place on Irish grain exports because of shortages.[27] Thus in November 1404 as Thomas Walton petitioned for a licence to export wheat to Scotland he was one of the last grain exporters in the country.

Yet the despite the royal letter of November 1404 offering to help Thomas Walton, no immediate help was secured. In 1400 King Henry IV asserted that he was the suzerainty lord of Scotland but took it no further.[28] Therefore the writ of the English king only partially extended into Scotland in areas favourable to the English. It would appear that Lochryan in the lordship of Douglas was not a favourable area. Instead Thomas Walton spent many years waiting for redress. Early in 1412 he again petitioned the English government for redress against Alexander Campbell and Ector his brother. On 18th February 1412 Henry IV gave a licence to Thomas Walton to travel to Scotland, during the truce, to sue for restoration, or to send deputies. For the journey and their stay in Scotland Thomas Walton was allowed to buy eight crannocks of wheat, two crannocks of peas and one pipe of wine for their sustenance.[29]

No later petitions by Thomas Walton seeking redress appear among the published English government records. It is hoped that he did get compensation but on the other hand he could have just given up hope and accepted his loss and went trading with other countries instead. After 1412 Thomas Walton of Drogheda disappears from the records while other members of the Walton family continued the connection with Drogheda such as William Walton in 1451.[30]