The medieval landscape as we see it today can be misleading. The strong stone built castles of the thirteenth century along with the stone tower houses of the fifteenth and sixteenth century mixed with the stone churches and abbeys gives the idea that the elite lived in stone structures and the ordinary people were in mud and timber houses. But scattered across the medieval landscape are references to stone houses that are not the homes of the elite. We may venture to call their occupants upper middle class or lower upper class but they certainly were not the great territorial lords.

The Ormond deeds preserved at Kilkenny castle and now at the National Library of Ireland contain references to stone houses across the Ormond lordship and not always in the land of peace. This article recounts some of these stone houses that were built in both urban and rural settings across the Earldom.

The borough town of Kells in Co. Kilkenny was of modest size compared to other medieval towns with about 71 burgages. Early charters of William FitzGeoffrey allow the burgesses to have timber from the lord’s woods to help build their houses of timber, mud, clay and a sprinkling of stone.[1] Yet in the midst of the Kells town was a substantial stone house that features in a number of deeds. In March 1332 John Trumpour of Kells granted to William son of Richard Coterel a great stone house in the midst of Kells together with an empty tenement adjoining. This property had been granted to John Trumpour for life by Arnold le Poer.[2]

In November 1333 Eustace son of Arnold le Poer sealed a deed whereby he guaranteed that if William Coterel was impleaded or disturbed in his possession of a stone house with a tenement in Kells then Eustace would pay William one hundred pounds of silver. The potential people who could disturb William Coterel were cited as Eustace le Poer and his brother, John son of Arnold le Poer.[5]
In 1337 William son of Richard Coterel granted to Perceval his son, the great stone house in the midst of the town of Kells which William had by gift of Eustace son of Arnold le Poer. Perceval Coterel was to hold the house for life by the yearly service of forty shillings.[6] 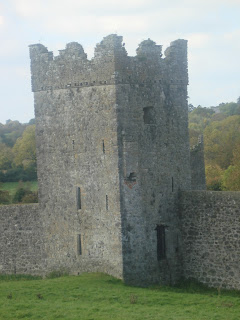 A stone tower on the boundary wall of Kells priory

A few miles down the road from Kells is the medieval town of Callan. This town like many others had its numerous timber houses yet it also had at least one stone building. In 1401 the Earl of Ormond received 2d in rent from Edward Perers, knight, for a stone house in Callan that was formerly held by Adam Norragh.[7] 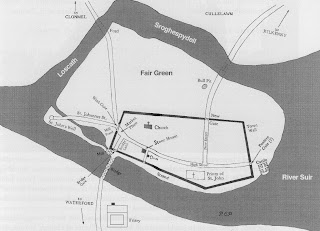 Upriver from Carrick-on-Suir was the important medieval town of Clonmel, headquarters of the liberty of Tipperary. Here we have just a passing reference to a stone house in the town of which there could have been other stone houses that didn’t make it into the surviving documents. On 11th November 1388 John Baroun and Alice Lowys his mother, gave a messuage in Clonmel to John Lowys lying between their stone house on the north side and the River Suir on the south side.[9]

Having seen stone houses in an urban environment, there are also a number of references to stone houses in rural Co. Tipperary, some built and some proposed to be built. The stone house at Slebogy falls into the latter category. In 1336 Robert son of Henry Crok agreed with the Earl of Ormond that if Robert did not build and inhabit the lands of Slebogy within five years then the Earl had the right to distrain for the agreed rent of eight marks and twelve pence of royal service. It was also agreed that if Robert didn’t build a stone house on the property then the Earl could resume possession of the manor.[10]

A number of medieval deeds relating to a land leases contain a provision for the tenant to build a house upon the land within a specific time period. In April 1417 Archbishop Thomas of Dublin made a lease for fifty years to Thomas Locum of land at Tany by Dundrum. As part of the lease, Thomas Locum was to build a ‘sufficient’ house of stone measuring 18 feet by 26 feet within the walls and 40 feet high below the battlement. If Locum didn’t build the house within the four year period then the Archbishop could re-enter the property and resume possession like at Slbogy.[11]

In July 1416 Richard Walsh and Philip Walsh, chaplains, said that if John son of William Casse and Hugh Cass gave them twenty-four marks then the chaplains would give them a stone house along with all other messuages, lands, rents and tenements with a rabbit warren, meadows and pastures in Rathsowagh and Lysdowf near Thurles.[12] Unfortunately we are not told in which townland was the stone house situated in.

Beyond the normal areas of the Ormond earldom the surviving documents record other stone houses such as at le Norragh in Co. Kildare. In November 1332 Walter de Veel appointed Nicholas Barbedor his attorney for placing Henry le Veel in full seisin of a stone messuage and twenty acres of land in Le Norragh, Co. Kildare.[13] A stone messuage would suggest the occupant was a middle class person, certainly above the vast majority of ordinary people.

Beyond these examples of stone houses there are other references in the surviving documents to important people who could have had a stone house or two. Sometime before April 1235 the bailiffs of Leinster had retained a plot in the town of the new bridge of Ross with the intention of building a house there for use by Earl of Pembroke. It seems the house was not built or not in the size the builders had hoped for. In April 1235 Gilbert the Marshal, Earl of Pembroke granted to William de Gloucester, burgess of Kilkenny, half the plot for 2 shillings per year.[14] It would be presumed that any house built for the Earl Marshal would be of stone but as the document is silent as to the exact materials used, it would be dangerous to speculate.

The above references are not exclusive to the Ormond deeds. Other medieval archive collections also have references to stone houses and stone messuages.[15]

That stone houses were rare in the medieval landscape is seen by the specific reference to the house been built of stone. For if stone houses were common then it would not make much sense to mention a stone house in a deed when it could be confused with other stone houses in the same area. Maybe someday archaeology could identify some of these stones houses and gives us a better understanding of their size and the type pf people who lived there.