Carlow in the register of Archbishop Milo Sweteman

Carlow in the register of Archbishop Milo Sweteman

The register of Milo Sweteman, Archbishop of Armagh 1361-1380, is held in the Public Record Office of Northern Ireland. It is the earliest in date of the seven surviving medieval archbishopric registers of Armagh which, with several gaps, cover the years from 1361 to 1543.[1] Most of the material in the register relates to the diocese of Armagh and the archdiocese of Armagh. Yet sometimes matters relating to places in the other three provinces of Ireland are recorded. Carlow is mentioned a few times. 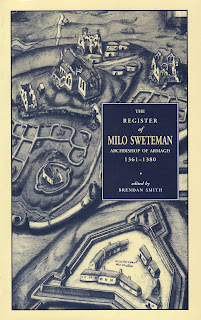 The references to Carlow may not be so out of place in the register of Archbishop Milo Sweteman. The first reference to the Sweteman family appears in the thirteenth century in the person of William Sweteman, provost of Dublin. Yet the main are of residence of the family was in the Kilkenny/Waterford area. Sir Robert Sweteman was summoned to Parliament in 1375 and his son John Sweteman was sheriff of County Kilkenny in 1395. Before 1381 John de Erley conveyed the manor of Earlstown in the Barony of Shillelogher, Co. Kilkenny, to Robert Sweteman.

The earliest record of Milo Sweteman dates from 1341 when he was appointed by Richard Ledred, Bishop of Ossory, as one of his two attorneys in Ireland.[2] When Bishop Ledred died in 1360 Milo Sweteman was then treasurer of the Diocese of Ossory and was shortly after elected Bishop of Ossory by the cathedral chapter. On travelling to Rome to receive the seal of confirmation, Pope Innocent VI quashed the election and made Milo Archbishop of Armagh to fill the vacancy caused by the death of Richard FitzRalph in November 1360. Milo Sweteman was consecrated Archbishop in November 1361.[3]

Most of the Carlow references in the register of Archbishop Sweteman relate to royal letters ordering the appearance by the Archbishop, or others, at Carlow before the justices sitting there or to the exchequer which was based in Carlow from 1361 to 1394. For more on the exchequer at Carlow see article at = http://celtic2realms-medievalnews.blogspot.ie/2015/04/the-medieval-exchequer-at-carlow.html

The royal letters were usually direct to the sheriff of Louth as the Archbishop of Armagh usually resided in Louth in the medieval period as Armagh lay in the Irish sphere of influence.

The Carlow references in 1367

On 26th February 1367 Thomas de la Dale testified at Drogheda to a letter sent by King Edward III to the then sheriff of County Louth. The letter commanded the sheriff to instruct Archbishop Sweteman to deliver without delay to John, son of Peter de Haddesore the manor of Inishkeen, Co. Monaghan, which Jordan Darditz had given to Richard de Haddesore and his wife Margery and their heirs.

A pre February 1367 document, possibly the will of Richard de Haddesore, directed that on the death of Richard and Margery, and their son John, and his sons John, Richard and Peter the manor ought to descend to John son of Peter Haddesore. It had fallen to the Archbishop of Armagh, possibly as the executor, to implement this transfer of the manor. The sheriff was told that if Archbishop Sweteman did not obey, and if John de Haddesore wished to pursue the matter in court, then the sheriff was to summon the Archbishop to appear before the justices at Carlow within fifteen days of Easter. A note appended to the letter said that John de Haddesore gave 10s in security to pursue the matter in court.[4]

Shortly after this royal letter, Archbishop Sweteman was summoned to appear at a parliament at Kilkenny on the 14th June.[5] The Archbishop or his proctor may have used the occasion of this parliament to talk with government officials to delay the Haddesore court case. It seems that such a delay was achieved, even if only to defer the case for a few months. On 14th October 1367, at Carlow, Gerald Fitz Maurice, Earl of Desmond and justiciar of Ireland testified to another royal letter sent by Edward III to the sheriff of Louth changing the date of appearance of the Archbishop at Carlow to 3rd November 1367.[6]

It would seem that John de Haddesore was unsuccessful in acquiring the manor of Inishkeen in 1368 or he didn’t hold it for long. Instead the manor reverted to the Archbishop of Armagh. In October 1371 Maurice McMaghon wanted justice from ill-treatment by the Archbishop’s tenants at Inishkeen. Later on 28th September 1375 Archbishop Sweteman granted Inishkeen to Roger Gernon, lord of Gernonstown on a lease of five years from 1st November 1375 at a rent of 40s and 500 eels per year.[7] Yet this was not the end of the Hadsor relationship with County Monaghan. On 12th May 1425 Sir John Hadsor witnessed the indenture between James Butler, Earl of Ormond and King’s Lieutenant of Ireland and Bernard McMaghon in which the latter swore loyalty to the English king.[8]

The Carlow references in 1368

On 12th February 1368 John de Troy testified to a letter sent by King Edward III to the sheriff of Louth (then known as Uriel), commanding him to appear at the Irish exchequer at Carlow on 17th April with money gathered from the county of the cross of Ulster. A scribe in the household of Archbishop Sweteman wrote that this letter was obtained by the malice of John de Troy without the knowledge of the king.[9]

In 1368 John de Troy was treasurer of Ireland and held that position since September 1364. He got the job due to the outbreak of opposition to English born officials but John de Troy was not the best of treasurers even if the exchequer became more efficient under his administration.[10] His accounts up to July 1368 were still not completed audited as late as 1407 when his executors were summoned to account. Previous to the treasurership John de Troy was second baron of the exchequer from 1347 to 1364.[11]

The money required at Carlow was 100s from the Diocese of Down for many defaults. The Diocese was then vacant and Archbishop Sweteman was guardian of the spiritualties, assisted by John Langestoun, clerk. An additional 100s was from the same Diocese for unjust impediments.[12]

In June 1368 King Edward III sent a letter to the sheriff of Louth to command Archbishop Sweteman and John Kenan, his clerk, to permit the prior of St. Mary of Louth to present a fit person to the vicarage of St. Feghin of Tarminfeckin. The Archbishop had previously prevented the prior of St. Mary from filling the vacancy. If the Archbishop did not obey the command of the sheriff, then Archbishop Sweteman and John Kenan were to appear before the justices at Carlow within fifteen days of 24th June 1368. This royal letter was testified by Maurice Fitzgerald, Earl of Desmond and justiciar of Ireland, at Drogheda on 20th June 1368.[13]

Yet it seems that Archbishop Sweteman got a delay on the summons to appear at Carlow within fifteen days of 24th June 1368 as in July 1368 another royal letter was sent to the sheriff of Louth. In this new letter, testified by Robert de Preston at Carlow, the Archbishop was to appear at Carlow within three weeks of 29th September 1368 to answer the plea of the prior of St. Mary.[14] 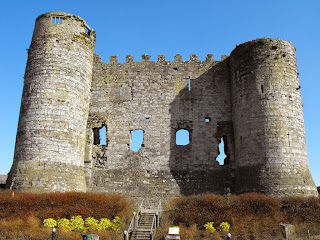 Carlow castle - one time home of the royal government

The Carlow references in 1371

On 6th July 1371 Robert de Preston testified at Carlow to a letter sent by King Edward III to Archbishop Sweteman instructing the Archbishop to cause the dean and chapter of Armagh to appear before the justiciar at Carlow within fifteen days of Michaelmas, to answer the Abbot of Mellifont, who claimed that he was owed £80 by the chapter.[15] This summons possibly had its origins in 1369 when the prelates at a great council at Dublin on 22nd April 1369 granted a subsidy to William de Windsor, Lord Lieutenant of Ireland, at a rate of one mark per every carucate of arable land belonging to the bishops. The bishops could recoup this tax from their free tenants, gavellers and betaghs. The bishops also agreed to a tax of two tenths of the value of each benefice having first obtained the consent of the clergy.

The abbey of Mellifont was in a state of flux in the years from 1321 to 1380 over the admission of English and Irish clergy. In 1321 King Edward II wrote to Citeaux abbey that Mellifont only admitted clergy that were not of the English race which was contrary to laws of separation between the races passed in numerous parliaments and great councils. The abbot of Citeaux replied that the Cistercian order had passed a decree against racial discrimination. Yet by 1380 a law was passed that no Irishman should be admitted to Mellifont.[17] In February 1370 King Edward III wrote to Archbishop Sweteman compelling him to summon the abbots of Mellifont, St. Mary’s and Newry along with the prior of the Hospital of St. John of Jerusalem to pay the tax.[18]

It is not known if the Armagh chapter paid Mellifont the £80 it demanded by Mellifont or even if they attended the justiciar’s court at Carlow. 1371 was not the last time an Archbishop of Armagh had business in Carlow. In about 1410 Archbishop Nicholas Fleming was in a legal action against Sir Thomas Fleming, baron of Slane, Christopher Holywood and others concerning the church of Rathdromnew. Archbishop Fleming wrote to John Fitz Adam and his fellow justices of the common bench, meeting at Carlow, to include the name of John Herdman as attorney for the Archbishop in the case.[19]

After 1400 the exchequer and justice wing of the common bench returned to Dublin as the Irish of Leinster made Carlow unsafe and insecure. The Archbishop of Armagh also returned within his archdiocese and left the rest of the country to work away itself. Indeed if Archbishop Nicholas Fleming didn’t leave a register of his time at Armagh we would know very little about him from other sources.[20]

Yet for the brief time in the fourteenth century royal government in Carlow brought the Archbishop of Armagh out of his isolation to engaged with the rest of Ireland in the heart of the Carlow countryside. 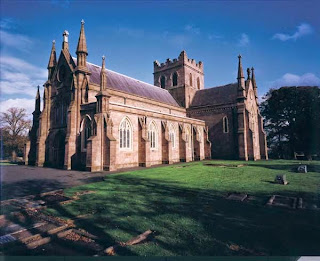