The medieval parish of Templepeter is situated about five miles south-east of Carlow town in the Barony of Forth. The early history of the parish is unknown. The surviving monuments show that the townland of Ballintrane was the most popular settlement location in the parish. In Ballintrane there are two fulacht fiadh, two enclosures and one ringfort. Elsewhere at Ballymogue there is an earthwork. The other townlands in the parish, viz., Clonmacshane, Kilbrickan and Templepeter do not appear to have any visible monuments but may have archaeological features under the surface. The other townland of the parish, Graiguealug is divided between three parishes and it in full extent has three enclosures along with later castles/tower houses.[1] 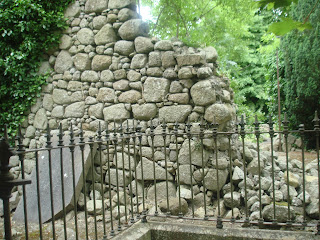 Outside of West wall of the church from the south-west

The name of Templepeter, church of Peter, would suggest an early date for religious practice in the parish. The common name for a parish church features the word ‘kil’ in the place-name if it doesn’t take the townland name. The word ‘temple’ is not usually seen in an isolated environment. At the religious complex at St. Mullins you have two separate churches called Temple Mor and Temple na nBo. At Clonmacnoise there is Temple Dowling and Temple Ciaran.[2] Many of these churches were dated to the 1050 to 1200 period. Only a detail archaeological survey of the fields surrounding Templepeter church could establish if the church is an isolated building or part of a larger complex. 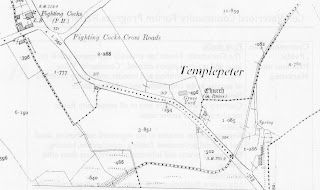 The church of Templepeter is situated within an irregular shaped graveyard which is surrounded by a granite wall of cut stone blocks. The church is described as a rectangular structure aligned east-west and measuring 13.2 meters by 7 meters. At 92.4msq Templepeter is a fare size church for a small parish (1,045 statue acres). In the thirteenth century Templepeter was in the manor of Forth, property of the Marshal family before 1247 and the Bigod family after that until 1306. In 1247 the manor of Forth was worth £53 5s 2d making it second only to Old Ross as the most valuable part of the Liberty of Carlow.[3] 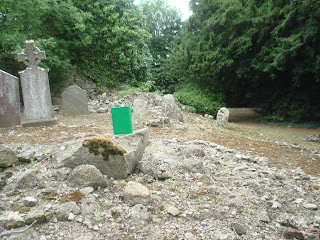 Line of the absent north wall with headstones within the church

The church is built of un-coursed mortared large granite boulders with cut stone at the corners. Templepeter parish is rich in granite stone. In 1987 only the west wall and part of the south wall survived (mainly rebuilt). 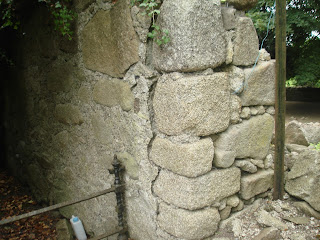 South-east corner of the nave

The absence of a visible chancel area suggested that the church was built before the Normans or the parish was too poor to afford a chancel area. Yet we should not so quickly discount the existence of a chancel area. The east wall of the nave is for the most part removed and eight feet east of the wall is an area enclose by a low wall reserved for a number of Nolan family burials. A small archaeological dig in the area between the church and the burial area of the O’Nolans would be of importance in understanding the history of Templepeter church. In the fifteenth century some unknown patron did invest in the church by purchasing a plain octagonal font.[4] 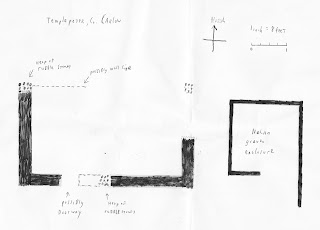 Ground plan of Templepeter church and the O'Nolan grave enclosure

Before the Norman Conquest, Templepeter was situated in the territory of Fortharta Uí Nualláin, Forth of O’Nolan.[5] Descendants of this Gaelic O’Nolan nation made their burial place at the east end of Templepeter church, the important part of the church, in what could have been a chancel area. The fifteenth century some unknown patron (may be an O’Nolan lord) invested in the church by purchasing a plain octagonal font.[6]

The surviving church at Templepeter has few architectural details apart from the large corner stone’s particularly at the south-east corner. There is a possible south doorway about ten feet from the west wall. The surviving structure shows no obvious window sites but parts of the south wall have been reconstructed. It is very possible that at least one south window was previously located in the reconstructed area.

If the surviving structural evidence gives us little information on Templepeter church, the documentary evidence gives us even les information about the parish. The names of the incumbents of the medieval vicarage of Templepeter are few and far between. This is mainly due to the absence of any diocesan register. It is also due to the stability of the parish that nobody made a petition to the Pope for the benefice. The papal registers in Rome provide the main body of evidence on the Irish medieval church and they are silent about Templepeter until the late fifteenth century. 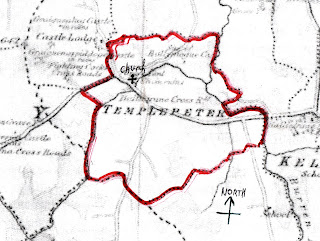 In 1495 the parish of Templepeter was variously spelt as Tpemplo Pedit, Templopedit, Templopedi, alias Kylnelada. The parish was worth five marks in 1495 and was occupied by Odo Ohedean. It was said that Odo Ohedean claimed to be the vicar was without title or support in law and that he held the vicarage for about seven years (starting c.1488). On 20th November 1495 Thady Occurruyn, cleric of the Diocese of Leighlin, received a papal mandate to have the precentorship of Leighlin (occupied by David Omurray) along with the rectory of Caruasuan (occupied by David Omurray, worth three marks), and Myshall (occupied by Donald Omillan, worth six marks) with the vicarage of Templepeter. The archdeacon of Glendalough with the dean of Ossory and Nicholas White, canon of Ossory, were commissioned to decide if Thady Occurruyn should have all four benefices. Sometime before 1495 Thady had received dispensation as the son of a priest and an unmarried woman to be promoted to all even sacred orders.[7]

A few days before, on 7 November 1495, Thady Occurruyn, as vicar of Berrac (Barragh), had procured a papal mandate to have the vicarages of Myshall (occupied by Patrick Ocurruyn) and Ballon (occupied by Henry Omilain). In this papal letter Thady Occurruyn was son of a deacon (in 1495 an archdeacon) and an unmarried woman. Myshall vicarage was then worth three marks and under the patronage of the rector and Thomas Wall. The difference in the name of the Myshall vicar and the value of the parish possibly occasioned the second letter of the 20th November.

The vicarage of Ballon was worth four marks and was under the patronage of Glascarrig priory in Co. Wexford. The treasurer of Leighlin along with Cornelius Obroyn and Gerald Mardul, canons of Leighlin, were to judge the matter.[8]

In November 1502 Thady Occurruyn occupied the vicarages of Kalyn (Killeen in Killabban, Co. Laois) and Kerrach (Curragh in Killeshin, Co. Laois) in the Diocese of Leighlin without any title or support in law. Also in 1502 Henry Omyllayn occupied Kellasna (Killeshin, Co. Laois) vicarage without any title. Edmund Omillayn, cleric in the Diocese of Leighlin procured a papal mandate for the three vicarages with Maurice Offaellayn, canon of Limerick as the judge.[9]

It is not known how long after 1495 did Thady Occurruyn hold Templepeter as the parish disappears from the records. In the secular world there are few references to Templepeter parish. It would appear that the parish was within the area of the O’Nolan lordship. When the O’Nolan chief surrendered his lands under the surrender and regrant scheme of the Tudor government it would seem that a third part of his lands were retained by the government. In 1550-51 the crown made a lease to Edmund O’Leyne and John Barry of Freeton, of considerable lands across County Carlow including a third part of the townlands of Templepeter, Ballintrane, Kilbrickan, Ballymogue and Clonmacshane.[10]

In 1562-3 Thomas Butler, 10th Earl of Ormond, was granted the former possessions of many religious houses in Counties Kildare, Kilkenny, Tipperary and Carlow. At the same time he received secular lands in these counties. At Templepeter Thomas Butler received a third part of each townland in the parish.[11] 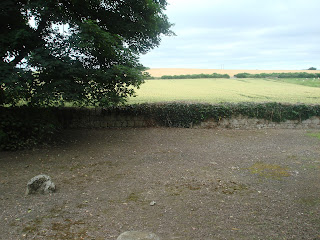 Templepeter parish in the nineteenth century

Templepeter parish does not feature often in later surviving documents. In the 1821 census there were 116 inhabited houses in the parish of Templepeter containing 121 families. Living in these houses were 328 males and 352 females.[12] By 1837 the population of the parish had declined to 349 people.[13]

As the nineteenth century progressed the parish of Templepeter continued to decline in population, falling from 234 in 1851 to 159 in 1861 and the number of dwelling houses fell to 27 with 2 uninhabited houses. Only Kilbrickan recorded an increase in population from 7 to 12 people. These 12 people all lived in one house.[14] 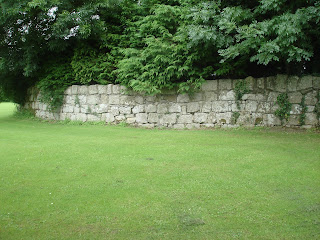