The medieval and civil parish of Colligan lies in the Barony of Decies without Drum in mid County Waterford. The main road from Dungarvan to Clonmel passes along the western edge of the parish. The parish was also known by the name of Kilcrecan, Quylgan and Coledan.[1] 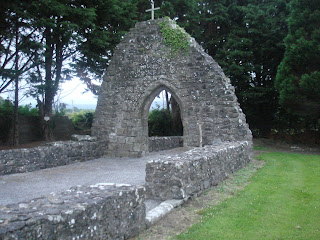 People have lived in the valley of the Colligan River since early times. The quite sheltered valley offered fresh water and protection from the harsh winds to grow their crops. In the townland of Knockanpower are the remains of a horizontal mill to process the grain crops.[2] Also in Knockanpower are three earthworks marking the sites of former human activity.[3] The townland of Garryduff also has an earthwork along with three fulachta fiadh and a rectangular enclosure.[4] Carrowgarriff More also has the site of an earthwork.[5]

The medieval church of Colligan stands on the west bank of the Colligan River within a subrectangular graveyard. The foundations of the nave and chancel have been restored and are separated by a 9 foot height pointed chancel arch (Width 1.75m & height 2.75m). The pointed arch has a chamfered rib within. Colligan parish may have been small in size and wealth yet the arch shows that the medieval people of that place made great efforts to have a church worthy of beautifying the glory of God. Much of the fabric of the church is lost but it too must also have had wonderful architectural features. Perhaps it lies under the plaster of surrounding houses or in the nearby Catholic Church. 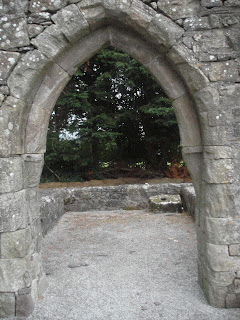 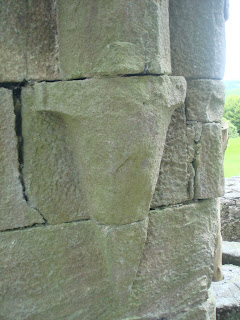 Detail of the chancel arch 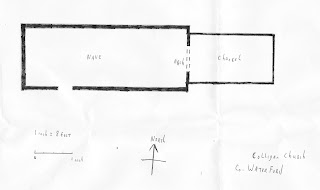 A particularly interesting feature of the medieval church of Colligan is its situation. At the Reformation the buildings and property of the medieval parish church passed to the new Protestant Church of Ireland. The membership of the new Church was very small as the vast majority of the Irish people remained as members of the Roman Catholic Church. Consequently most of the medieval parish churches were left fall into ruin. After the Act of Union of 1801 the Church of Ireland began a programme of building new Protestant churches beside, or on the foundations of, these ruined medieval churches. Colligan is an exception to this construction programme as the ruined medieval church is a short distance north of the Roman Catholic parish church for Colligan, the church of St. Anne. 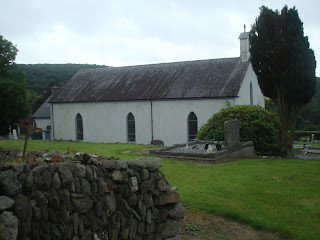 In medieval times Colligan was a constitute parish of the plebania of Dungarvan.[7] It is not known when the parish was formed. Many of the parishes in the Diocese of Lismore in the area of modern South Tipperary were formed by 1250 and it is likely that Colligan parish was formed sometime in the previous hundred years. In about 1302 the parish was valued at £2 with the papal tenth worth 4s.[8] In 1660 the rectory was in the patronage of the Earl of Cork and he had the right of presentation which right passed to his descendants, the Dukes of Devonshire.[9] It is likely that in medieval times the patronage of Colligan parish was also in lay hands.

The names of the incumbents of the medieval vicarage of Colligan are few and far between. This is mainly due to the absence of any diocesan register. It is also due to the stability of the parish that nobody made a petition to the Pope for the benefice. The papal registers in Rome provide the main body of evidence on the Irish medieval church and they are silent about Colligan until the sixteenth century.

In 1516 Thady Mackrad held the perpetual vicarage of Colligan with the rectory of Clonea. This Clonea was in the area east of Dungarvan, by the sea, known as Clonea Strand. The other Clonea in Co. Waterford, known popularly as Clonea Power near Carrick-on-Suir, was in medieval times known as the parish of Mothel. 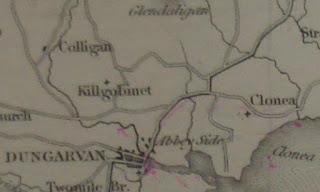 Location of Colligan and Clonea

In April 1516 Thady Mackrad received papal letters to have the deanery of Lismore (worth 24 marks). Unfortunately the value of Colligan parish was not stated in the papal letter.[10] It is not clear if Thady Mackrad was successful at acquiring the deanery position. Another later vicar of Colligan in the sixteenth century was Nicholas Kellehin who in 1588 was vicar of Lisnakill. Thereafter the succession list of vicars doesn’t begin in earnest until 1615 with John O’Hea.[11]

In 1298, Thomas FitzMaurice of Shanid, Co. Limerick, held ownership of most of Colligan parish. The half villata there used to earn 40s yearly for Thomas but in 1298 was in waste. Nobody would rent the land due to robbers nor could any income be got from the parish.[12] During the minority of Thomas’s heir the king held his estates but it would seem that the escheator fared no better at earning money from Colligan as the Fitzgeralds.[13] Ownership of the parish passed from Thomas to his son, Maurice FitzThomas, 1st Earl of Desmond. It later descended to the Fitzgeralds of Dromana.

In the turbulent years of the Tudor period the ownership of Colligan parish and its different townlands changed with the rise and fall of Tudor power in Ireland. In October 1566 Richard Lookar, merchant of Waterford, was granted the tithes from Knockanpower townland with many other townlands in County Waterford along with the rectory of Dungarvan and its plebania chapels including Colligan. In 1559 Richard Lookar was bailiff of Waterford city. In August 1576 John Lookar, gent of Waterford, received a new grant of that given to Richard Lookar.[14]

In February 1572 John Thickpenny was granted the rectory (sic. vicarage) of Quylgan, alias Colligan along the possessions and parishes formerly belonging to Molana Abbey. There is no evidence that Molana Abbey did own the advowson of Colligan parish. John Thickpenny also received the tithes of Garrycloyne townland in the parish.[15]

During the reign of Queen Elizabeth, Thomas Fitzrichard Fitzgerald, gent of Pallas, Co. Limerick, held ownership of the townland of Garryduff in Colligan parish with other townlands around Co. Waterford. At some unknown date he mortgaged these townlands for £136 to James Fitzthomas Sherlock. In 1592 Gerald Fitzrichard Fitzgerald, brother of Thomas, was granted the right of redemption after proving that Thomas’s son, Richard, was a bastard and died in rebellion against the Queen which was always not a good thing. But Gerald Fitzgerald didn’t gain possession as in 1591 Garryduff was granted with all the other Waterford lands of Fitzgerald to Richard Beacon as Fitzgerald was attained.[16]

By 1640 Sir Richard Osbourne of Knockmoan held the townland of Garryduff as part of the manor of Knockmoan. At that time the townland contained half a ploughland at 90 acres and was worth £5 7s 6d.[17] 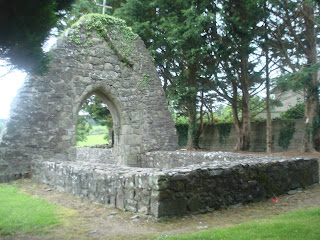 Chancel area and east side of archway

The biggest landowner in Colligan parish in 1640 was Garret Fitzgerald of Dromana. He held two ploughlands of the parish where the total parish measured three and one half ploughlands. The Fitzgerald lands included the townlands of Colligan, Garrycloyne and Knockroe and measured 660 acres (of which 90 acres arable and 290 acres pasture), worth in total £33 9s.[18] In 1663 Thomas Ronan of Youghal claimed to have inherited a lease (made in 1639) of his father, James Ronan, of land at Colligan from the Fitzgeralds for fifty-one years at £10 per annum.[19] Sir Richard Osbourne of Knockmoan had a lease from 1633 of one and half ploughlands of Colligan and Garrycloyne from the Fitzgeralds for fort-one years at £20 per year.[20]

Other landowners of Colligan parish in 1640 included David McDonnagh of Knockpoery (Knockanpower) held the half ploughland in that townland (150 acres) and which was worth £13 2s 6d. He paid 15s in chief rent to the earl of Cork. The final townland in the parish was Caherowgariffe (Carrowgarriff), containing half a ploughland (75 acres) and was worth £4 9s. This townland was owned by Philip McGrath of Curaghnesledy, in Modeligo parish.[21]

In the 1830s Colligan parish was measured at 3,679 acres with just over one thousand people. The tithes then amounted to £135 of which the rector received £90 and the vicar the balance.[24] A list of the successive vicars of Colligan of the Church of Ireland faith was compiled by Rev. William Rennison.[25] Further particulars of Colligan parish, with a list of Roman Catholic pastors, was included by Canon Patrick Power in his history book of the united diocese of Waterford and Lismore.[26] 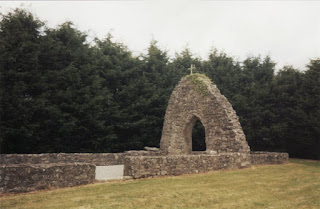 Colligan church from the south showing doorway and arch