In the year 1269 there was held somewhere in Ireland a parliament for the better promotion of trade. Elsewhere around the country the business of life and security continued.

In Connacht King Aedh O’Conor was causing great disturbances among the Anglo-Norman settlements. In punishment the government took back into their own ownership the cantred of Tirmany which only escalated Aedh’s attacks. In 1268 he was summoned to a conference at Athlone but instead of peace breakout, Aedh sent his armed men into the town, killing many.[1] In 1269 the new justiciar, Robert d’Ufford, began construction of Roscommon castle, in the heart of Aedh’s territory, to protect the settlements and control King Aedh. Richard de Exeter, deputy of the justiciar, was paid £90 for the defence of Roscommon castle in the years 1269-1270.[2] King Aedh clearly saw the castle as a threat to his own power and sought to destroy it before it was fully completed. In 1270, 1271 and 1272 he attacked, captured and destroyed the castle but the English rebuilt it every time. Peace only came with the death of King Aedh in 1274 when the Irish devoted their energies to fighting among their own.[3]

Other events that happen in 1269 include the granting of the king’s licence to Thomas de Clare to travel to Ireland in April. In September the king appointed Brother Walter Omychain of the Franciscan order as Bishop of Ross.[4] When King Henry III granted the lordship of Ireland to his eldest son, Prince Edward in 1254, the king reserved for his own use the temporalities of vacant Irish bishoprics and monastic houses along with the appointment of new incumbents.[5] The Earl of Ulster felt that his area of influence was outside this royal reservation. In December 1269 King Henry wrote to Walter de Burgh, Earl of Ulster, that Ulster was not outside the royal area of reservation and the earl was to restore all church property to their respected owners.[6]

Elsewhere in March 1269 the Archbishop of Dublin and the Prior of Hospital of Jerusalem in Ireland settled a long running dispute of the right to the church of Stachfythenane. Both sides cancelled each other’s debts and the prior promised to defend the archbishop in any challenge for Stachfythenane made by Bonefacius de Coronato.[7] In June 1269 the dean and chapter of Cashel grant a wood called Dyreyncled to Thomas son of David for a yearly rent of four pounds of wax or 2 shillings on the feast of St. Patrick.[8] In November 1269, before the justice in eyre at the court of Lord Edward, son of Henry III, John and Matilda Boschere released all claims on 15 acres of land at Balirothegane to the Archbishop of Dublin in return for 100 shillings.[9] In December 1269 a jury of inquisition met in Kilkenny to examine a dispute between the Bishop of Ossory and the heirs of William Marshal. The jury found that the Bishop of Ossory had a just claim to the market at Kilkenny and to an ounce of gold for land given to William Marshal long the banks of the River Nore.[10]

The parliament of 1269 met in the Michaelmas term (30th September to 14th January) of that year at an unknown location.[11] In attendance were the justiciar, Robert d’Ufford and members of the king’s council, all the magnates and the whole community.[12] What is exactly meant by “the whole community” is unclear. The later parliament in 1297 is considered the first to have representatives of the people, i.e. the middle class people of property. Richardson and Sayles remarked that this “whole community” may simply be representatives who were not magnates, although it was also the case that the magnates sometimes claimed to speak for the “whole community”.[13]

The entire business transacted at the 1269 parliament is unknown. The chief business transacted, according to the surviving evidence, was the adoption of the Statue of weights and measures. The text of this statute declared that:
Provided and statute is of the council of Lord Robert d’Ufford, Justiciar of Ireland, and others faithful to Lord Edward who are of his council and of the agreement of all the magnates and the total community of Ireland that one and the same measure each beget having one and same gallon, one and same weight, one and same elbow of length are of future set down for all of Ireland which are usual in the city of London.[14]

This legislation was not the first effort to standardise weights and measures. In 1217 Henry III declared that there should be one measure of wine, corn and ale throughout the kingdom and that there should be uniformity in the length of cloth.[15] This declaration seemed to have only partial effect. In 1244 Henry III had to issue a new proclamation via the justiciar of Ireland that all “weights and measures should be equal in counties and vills in Ireland”. The standard for this uniformity was the weights and measures used in Dublin, “if they be such as can be followed”.[16] 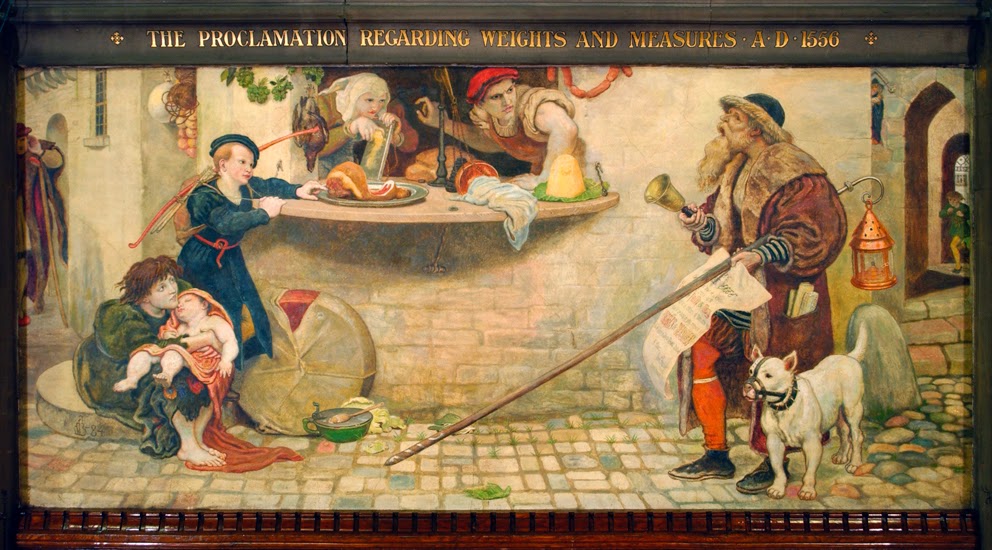 Proclamation of weights and measures by Ford Madox Brown from 1st-art-gallery.com

The last proviso was of importance as even within Dublin there was not uniformity in the weights and measure used. In 1253 it was reported the standards still varied around the country and particularly within Dublin. The justiciar of the time, John Fitz Geoffrey, was instructed to proclaim a uniform measure throughout Ireland but with little success.[17] The parliament of 1269, by setting London as the standard for weights and measures, hoped to get over the differences in Dublin. Carlow castle had previously purchased a gallon measure in Dublin to use as a recognised standard measure. It is not known if this gallon measure was laid aside and a new one purchased from London.[18]

Weights and measures after 1269

It would seem that the London standard was not universally adopted in Ireland. In 1276 it was found that the sacks of wool used in Ireland were larger than in England yet having equal monetary value. The Irish wool sacks were charged 10 shillings in tax while the English sacks carried a tax of half a mark (6 shillings 8 pence). After complaint by some Irish merchants the king instructed Robert d’Ufford to charge the Irish sacks the same tax as the English sacks.[19] In this incidence there appears to have been no effort made to standardise the sacks sizes between Ireland and England. 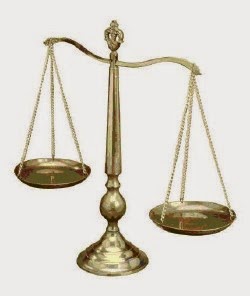 Weights and measures and the scales of justice

But not every overseer of the weights and measures had the king’s interest and the promotion of sound trade at heart. In the 1290s Edmund Biroun was keeper of weights and measures for the King in Ireland. As part of his job he went to the chief market towns to check the measures. While at some towns the locals gave Edmund many gifts not to charge them unjustly, and so Edmund falsely changed or diminished the legal measures, and amerced others who were not culpable or convicted. Edmund Biroun was summoned to appear at the justiciar’s court but fled the country. Later when the justiciar was returning from visiting the king in England he found and arrested Edmund Biroun in Wales. Edmund was brought back to Ireland but escaped from Dublin Castle before his trial date. In 1300 the sheriffs were commanded to demand him in their county courts until Edmund Biroun was outlawed or taken.[21] It is not clear if Edmund was ever brought to justice.

The success of the 1269 parliament in effecting standard weights and measures was varied. But the problems of standardization were by no means confined to Ireland. In 1390 thirty three offenders were found in the city of Exeter alone, using false measures.[22] In France regional variations in the weights and measures used continued until the French Revolution.

The parliament of 1269 was followed by seven years of normal activity before the next parliament met in 1276. This gathering will form the subject of a future article.