Margaret de Cormeilles and a miscarriage of justice

Margaret de Cormeilles and a miscarriage of justice

Can we, eight hundred years later, correct a miscarriage of justice or will some other twist turn the story? So, who was Margaret de Cormeilles and can we put a biography to the name? Her surname of Cormeilles comes from the town of Cormeilles (also written as Cormaill) in the Eure Department of France.

Margaret de Cormeilles died sometime before mid-May 1236 and as was the practice at that time the government order an inquisition to be made as to what lands Margaret held and more importantly was there any taxes or potential income due to the crown. On 16th May 1236 a writ for an inquisition post mortem was sent to the sheriff of Herefordshire to enquire into the estate of the late Margaret de Cormeilles. A jury of twelve men led by Sir Robert de Stapleton met at an undisclosed location and at an unknown date where they found that Margaret had a half knights fee in Tatinton and in Bolingehop in Olehungre, wherein she had three carucates of land in demesne, paying an annual rent of 100 shillings and worth £13 per year with the said rent. All these lands were held in chief of the King.

The jury also said that Margaret had a further two knights fees. One of these was in the vill of Eston in Herefordshire and was held by Roger de Eston. The other fee was attached to the vills of Begesoure and Hennemere in Gloucestershire. This fee was held by James de Solers.

The jury then found that Margaret had two married daughters, Alice and Isabella who were her heirs. Alice, the elder daughter, had married Robert le Archer while Isabella had married Simon de Solers.[2]

Having concluded their work the jury began to make their way home while the heirs were happy with a good result in their favour. But questions of land title remained unresolved. On the following day, 17th May 1236, another writ was sent to the sheriff of Gloucestershire to enquire if Margaret de Cormeilles held any land in Gloucestershire in chief of the King.

It would seem that the Cormeilles family gave the impression of holding land in Gloucestershire or the possession of a knight’s fee there suggested possible land ownership. The jury of twelve met on an unknown date where they found that “They have not known or heard of any Margaret de Cormeilles holding any land of the King in chief” in Gloucestershire. Instead they said that Albreda de Marmium held certain lands in the county of the King as her dower lands. By 1236 these lands had passed to Henry de Penebregg who held them from Hugh Giffard who held of the King.[3] A later inquisition in 1279 identifies these Gloucestershire lands as situated at Weston. In that year Henry, son of Henry de Penebregg held the lands from Walter Giffard, Archbishop of York.[4]

The daughters and heirs of Margaret de Cormeilles lost little time in entering their inheritance. By 30th May 1236 Robert le Archer and Simon de Solers had given homage to King Henry III for Margaret’s lands in Herefordshire. They were to pay £25 for entry and the sheriff of Herefordshire was directed on the 30th to take security for the entry fine. By the king’s letter we are told that lands of Margaret de Cormeilles comprised a fourth part of the Barony of Cormeilles.

By all accounts the daughters of Margaret de Cormeilles and their husbands settled into their Herefordshire lands without too much difficulty. About three years later some explanation for the supposed Gloucestershire lands of Margaret de Cormeilles began to appear. On 9th September 1239 Henry III informed the sheriff of Herefordshire that he had taken the homage of Hugh Giffard and his wife Sibyl for the lands and tenements lately held by Alice of Crowcombe (lately deceased) along with the homage of the other heirs of Alice. This Hugh Giffard was possibly the same man who held Weston-sub-Edge in Gloucestershire in 1236 while his wife, Sibyl, was a sister and co-heiress of Alice of Crowcombe.

No inquisition post mortem seems to have survived for Alice of Crowcombe to enlighten us as to her estate. To add further mystery no mention is made of any lands in Somersetshire in which county is the place called Crowcombe. We equally have little knowledge of Alice’s family. She had no living children but she had a husband at some time as she is called Alice of Crowcombe and not Alice de Cormeilles, which is what she would have been called if she was unmarried.

To confirm the connection we have a letter to the sheriff of Herefordshire in August 1221. The sheriff was order to give respite to Geoffrey of Crowcombe for the scutages of Ireland, Poitou, Scotland and Wales which were payable on the half knight’s fee formerly held by Walter de Cormeilles in the time of King John. A similar letter was sent to the sheriff of Gloucestershire.[11] 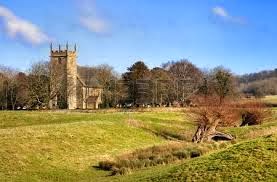 The Cormeilles lands in Herefordshire and Gloucestershire mentioned in the above transactions and inquisitions were part of the ancient inheritance of the family. Ansfrid de Cormeilles was the first to leave northern France and come over to England at the Norman Conquest. By 1086 he had seven lordships in Herefordshire and sixteen in Gloucestershire.[15]

In 1086 Ansfrid de Cormeilles is listed as owner of the manors of Weston-sub-Edge, Norton, Batsford, Winstone, Shipton (part of), Tantesborne, Pauntley, Kilcot, Ketford, Hayes by Newent, and Duntisbourne (part of) in Gloucestershire. He was a tenant of the king at Beckford and Ashton under Hill.[16] In all Ansfrid de Cormeilles held about 10,700 acres or just over 46 hides of lands, making him one of the top ten lay-landowners in Gloucestershire.[17]

Thus the Margaret de Cormeilles of this article was a great, great granddaughter of Ansfrid de Cormeilles of the Domesday Survey. She held a part of Colesborne, Gloucestershire, in which there was a wood called Power’s Wood, named for her second husband, Hugh le Poer.[21]

The two daughters of Margaret de Cormeilles settled down to life in Herefordshire after their uncle-in-law took the Gloucestershire lands of the Cormeilles family. Sometime around 1259-60 Simon de Solers, husband of Isabella de Cormeilles, died. At that time he held two carucates of land at Tadington (Tarrington) and Bulinghope (Bullingham) in Herefordshire. Simon de Solers was succeeded by his son Thomas de Solers who was over twenty-one years in 1260.[22]

Later in 1261 Alice de Cormeilles died and was succeeded by her son, Colin le Archer, who was aged about twenty-three years. Alice de Cormeilles held two carucates of land at Tarrington, Bullingham and Clehungre. She also jointly held with her younger sister, Isabella, the two knights fees attached to Hope Solers and Astun. These fees and tenements were jointly held by the sisters as a third part of the service pertaining to the Barony of Cormeilles.[23] Colin le Archer was later succeeded by Nicholas le Archer who in turn was succeeded in 1280 by his son, Nicholas le Archer.[24] By 1289 the manor of Tarrington and the one third of a knight’s fee in the Barony of Cormeilles was held of the king by Baldwin de Frevill but his connection with the Archer family is unstated.[25]

If Margaret’s daughters failed to get into Gloucestershire in 1236 there appears to have been little obstacle in the Giffard family moving into Herefordshire. On the death of Walter Giffard, Archbishop of York, in 1279 we find that he held among other places, including Weston-sub-Edge in Gloucestershire, one carucate of land in Tarrington, a third of a carucate in Bullingham along with assize rent at Clehungre and Bullingham, and that these lands were held of the king in chief.[26]

At the start of this article we read an inquisition post mortem which seemed to deny the daughters of Margaret de Cormeilles from getting their rightful lands in Gloucestershire. We were beginning to cry foul and report a miscarriage of justice. But like in a present-day court room the jurors answered the question on the writ, i.e. “how much land Margaret de Cormeilles held of the king in chief in Gloucestershire”. But they just answered the question and not the whole truth. They mentioned Aubrey Marmion holding the land in dower and in 1236 it was held by Hugh Giffard but gave no hint in any shape or form that Aubrey was the mother of Margaret de Cormeilles and that Hugh was her brother-in-law.

As Philomena Connolly once wrote “The information given in the record sources [usually government documents] can be incomplete in several ways. First, we are obviously only given one side of the story that of the government and the information is usually the minimum needed for administration purposes”.[27] The Gloucestershire jurors did just that – gave the “minimum needed for [the] administration purpose”.