Mocollop Castle, Co. Waterford:
A history of a medieval castle

In 1177 Robert Fitz Stephen and Milo de Cogan were granted the by Henry II. The of stretched from the Blackwater at Youghal to Dingle and encompassed most of modern counties of and Kerry.[1] Robert Fitz Stephen then granted some of his land to his nephew Raymond “le Gros” Fitzgerald which included the area of north east around Glanworth, Kilworth and Clondulane as well as property in . As Raymond had no legitimate children most of his estates passed to his sister Mabilia who had married Nicholas de Caunteton (Condon).[2]

Meanwhile the Roche (de Rupe) family came to settle in shortly after the Norman invasion of 1169. They first appear in in 1207 when David de Rupe was granted the cantred of Rosscarbery.[3]

Back in north-east the Condon family divided into two branches; the senior line held Kilworth while the junior branch of Nicholas Condon held Glanworth. Nicholas left a daughter as sole heir called Amicia who had married David Roche around 1250. When Nicholas died in 1260 Glanworth became Roche property. But David Condon of Kilworth claimed to be overlord of Glanworth and Glascarrig in Wexford which David Roche also came to own.[4]

For a time friendly relations were kept between the two families. When Maurice Condon, grandson of David, became head of the Kilworth family in 1289 a legal battle began over Glanworth. The court proceedings progressed slowly. By 1302 old David Roche was dead and his grandson David Roche was now at Glanworth.

David Roche II showed that Maurice Condon was not the overlord. He proved that Maurice De Carew as successor of Robert Fitz Stephen was the true overlord. David also showed the courts that de Carew had given Condon illegal powers of overlord by not getting royal licence to give such powers.

Maurice Condon was not happy and about 1305 started a war against the Roches. The ensuring war did not just occupy north-east but involved substantial areas of .[6] The war lasted until about 1311/12 with fighting in both counties. There were plenty of other landowners in between the two war zones including the owner of Mocollop.

But the Barry owners of Mocollop had their own problems. David Fitz David de Barry, Lord Barrymore and his brother Sir John de Barry disputed the leadership of the Barry family and the two men supported different sides in the Roche/Condon war.[7] What part Mocollop played in the war is unknown. So close to the war zone and with the Barrys involved would suggest that some military activity occurred at Mocollop. Eventually the Barrys supported the Roche side and closed Mocollop to the passing Condon army. If the war continued for any longer the Condon presence in north-east could have been wiped out.

The Bruce invasion of 1315 saved the situation. All the Norman families turned their energy to repelling the invasion. A settlement was effected between the families. The Roches kept Glanworth but lost Clondulane while in the Condons lost most of their land to the Roches.[8] Later in the 1340s the Condons would seek revenge on the Barrys by supporting the rebel Barrys against Lord Barrymore during the internal civil war in that family.[9] 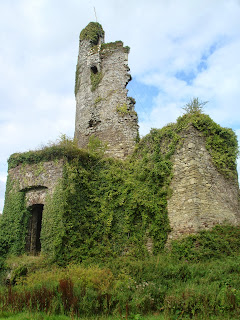 If the Bruce invasion saved Mocollop from local warfare the weather must have had some negative effect. Early in the spring of 1315 the rain started to fall and kept falling for most of the year. Meadows could not be mowed for hay and any idea of saving the cut grass was pure pie in the sky. Tillage crops were also lost and turf could not be harvested because it was too wet. Animals died as did the people. Starvation and epidemics depopulated the countryside. For three years until 1318 the weather was one bad day after another. Annals in their wonderful language record that mothers eat their children and even the dead were dug up and eaten.[10]

Manors across were ruined and trade routes started to cease as there was no crops or animals to trade. Mocollop was already weakened by the local Roche/Condon war and the three bad years must have had a big impacted.

The end of the Bruce invasion and the bad weather in 1319 should have given some respite for the Mocollop area. But the peace was uneasy. In 1320 Richard de Burgo, Earl of came into to defeat the united forces of the Barrett and Barry families. Towards the end of the 1320s the tided changed and the Barrys joined de Burgo in war against the Earl of Ormond in Kilkenny and William de Bermingham in . In this later war Lord Barrymore’s troops killed some Condons.[11] We do not know if Mocollop played any part in these military activities. What we do know is that Mocollop did play a part in the coming civil war in the Barry family during the 1340s.

The origins of this civil war began long before when David óg de Barry II died in 1278 and was buried at Buttavant Friary. With his death the unity of the Barry family began to fall apart. His eldest son, David Fitz David de Barry III should have become the undisputed leader of the family but his younger brother Sir John de Barry. Sir John de Barry was knighted in 1283 and founded a Carmelite Friary at Castlelyons in 1307.

When David IV died in 1344 he left as a minor heir his son David de Barry V.[12] Adam de Barry of Rathcormac (ancestor of Captain James Barry of Ballyclogh, Glanworth who married Olivia Maria Drew of Mocollop in 1841) refused to recognise David as Lord Barrymore.[13] Adam’s refusal was not just because of his own ambitions but he was encouraged by other persons. One of these others was Maurice Fitzgerald, Earl of Desmond since 1324. The Earl of Desmond had ambitions to control by acquiring strategic points. One of these points was Mocollop castle as it controlled the middle Blackwater river traffic. If the Earl could have the Barrys declared as English rebels then the government may seize their property. The Earl could then get Mocollop on the premise that he could better protect the peace.

Early in 1344 Adam de Barry went into rebellion against Lord Barrymore. Adam was joined by John de Barry of Dungourney, William de Barry of Carrigayna, Odo de Barry of Conna and a large contingent of Condons. The killing of the 1329 war was now coming back against the Barrys. Adam firstly attacked Lord Barrymore’s property at Rathcormac and then moved onto Castlelyons. After a battle and siege Adam took . With Odo de Barry of Conna as Adam’s ally the fall of Castlelyons would mean that Mocollop was now isolated from Lord Barrymore’s southern lands which stretched down to at Carrigtwohill. Sometime later Adam took . How difficult or easy was the taking of Mocollop is unknown. In 1347 Adam de Barry was made sheriff of on the strength of holding Mocollop.[14]

Adam de Barry now controlled a big part of east from Rathcormac to Castlelyons and over the border into Mocollop. But he had got restless from years of war. Using the office of county sheriff Adam made war on anyone who he took offence from. Groups of lords made complaints to and Adam got the sack in 1349.[15] It seems that David; Lord Barrymore recovered Mocollop around this time. The Barry civil war ceased around 1350 and a few years later David got a royal title to all his lands including Mocollop.[16]

If there were local celebrations they were of short duration. The infamous Black Death arrived in and in 1348.[17] It spread quickly across the English part of the country and killed many thousands. Urban areas were active sites for the plague. The Irish lived in dispersed settlements and so not many Irish died as English descended settlers. Mocollop was in the English area and so a victim of plague. How many died and what long term effect it had on the area is unknown. To add further misery was that the Black Death was only the start. Plague returned in 1361 and 1370 and into later times.[18] In 1529 Maurice, only son of Thomas, 12th Earl of Desmond died of plague at Rathkeale.[19]

A few villages across were so damaged by plague as to be abandoned. The village at Mocollop existed in the fifteen century and later. This would suggest that people died at Mocollop but enough people survived to keep the community alive and then they lost their parish.

During all this warfare, economic mood swings and plague Mocollop was an independent parish. In 1363 the two dioceses of Lismore and were joined under one bishop. The two cathedrals were in need of repair and reform. Bishop le Reve established a group of vicar’s choral at Lismore. To fund this group Mocollop was joined to Lismore and remained so joined until 1844. The church at Mocollop was now reduced to a chapel served by a vicar in Lismore.

In 1377 Mocollop was placed on a war alert when the Condons kidnapped David, Lord Barrymore. The government got involved to prevent another local war. Two Condons were taken as hostages until Lord Barrymore was released. Shortly after his lordship was released and so were the hostages. Peace was restored again.[20]

Yet peace did not bring economic prosperity. Tillage production needs lots of people and the Black Death caused such a population decline as to make tillage production near impossible. In around 1300 was a major exporter of corn but after the 1350 the country had to import most of its needs. Manorial revenues declined and money to upkeep the castle became in short supply. Much of could have been abandoned towards the end of the fourteen century.

The organisation of agriculture in the early Norman manors followed the two or three open field system. One field would be left fallow every year to allow regeneration. A field was divided into long narrow strips with people owing a number of strips which were not coterminous. Farmers earned income from their own strips but also helped each other to work all the strips. After the Black Death some farmers died and their strips were left unused. The reduced population meant the arable farming declined and pasture farming replaced it.

The strips had no division between them and legal disputes kept the manorial court busy. But livestock farming needed a dividing fence and so the length of hedgerows expanded. Two of these hedgerows can be seen today as snake like hedgerows stretching across the landscape.

If we find these snake hedgerows then we can find where the medieval strip farming was performed. The two snake hedgerows lie in the dividing line between the modern day townlands of Garrynagoul and Sheanbeg and between Sheanbeg and Marston. The name Garrynagoul means “garden of the foreigners” and arable farming of the would look a fine garden compared to the hill and mountainous country in the rest of the Mocollop manor. These two snake hedgerows were there before 1571 when the boundary between Counties Cork and was made as the county boundary follows the line of the two hedgerows. As the hedgerows mark the land ownership between the Condons and the Fitzgeralds in the early 16th century it is possible that the hedgerows were planted between 1350 and 1400. 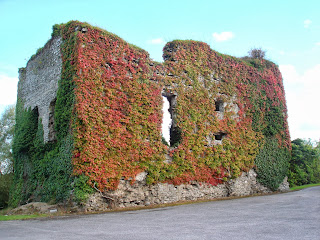 Law and order had declined and some castles were abandoned. In 1365 Maurice Fitz Richard and Raymond son of Peter Condon discovered many felons and robbers in the act of robbing . They were kept at the castle until Lionel, Duke of Clarence and viceroy of arrived. He promptly had the robbers put to death.[21]