Medieval Ireland saw two great building boom; from the late twelfth century to early thirteenth century and again from the mid fifteen century to the mid sixteen century.[1] There was a pause in castle building between about 1350 and 1450 due to a variety of reasons. When building resumed in 1450 the tower house was the castle of fashion. These buildings were about six meters square at the base and four to six storeys high.[2] The six published volumes of the medieval deeds of the Earls of Ormond provide a rich treasure trove of information and images of different types of medieval buildings.

Local timber, thatch and mud made most of the buildings in medieval Ireland. For the grander buildings like churches, cathedrals and the castles of the great lords stone was the chief building material. Various types of stone were used such as sandstone; granite and limestone. Limestone was quarried not just for its building stone or stone for sculpture but was used in abundance for burning lime to make mortar for the medieval buildings.[3] Kilkenny black marble was quarried since the 1730s but when did it start before that is difficult to say.[4] Before 1726 people used to freely take black marble from a common quarry only a quarter mile from Kilkenny city but not in any considerable quantities.[5]

Duiske abbey at Graiguenamanagh used not just local granite and schist stones but also employed yellow Dundry stone from the Bristol area. The River Barrow allowed boats to carry this stone across the Irish Sea and up to the abbey site.[6] It is possible that some of the quarrymen and masons who built abbeys like Duiske were from England.[7] After the Norman Invasion a large number of English, Welsh and Continental settlers made their home in east Leinster, including south Kilkenny.[8] In the early thirteenth century the large undertaking of Kilkenny castle was built with grey carboniferous limestone and possibly some masons from overseas.[9] Mellifont abbey used predominately local sandstone but also employed Dundry stone from Bristol and yellow limestone from around Caen in Normandy.[10]

In 1571 the tenants of the Earl of Ormond at Arklow were obliged to carry timber in four lighters to the port of Arklow every year. At the port the timber was loaded on ships for Dublin for the use of the Earl.[11] In 1606 boatmen on the Nore, bringing timber or wood to the quayside at Irishtown, were to ensure that the timber was removed within twenty-four hours or be fined ten schillings and possibly forfeit their boat.[12] 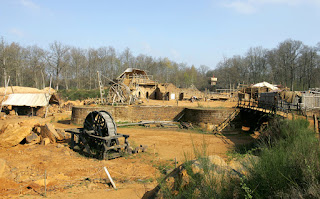 In Ireland we don’t have detailed building accounts as they do in England. Instead we possibly have the overall cost of the building or are left with government subsidies like the £10 grant given out in 1429 and afterwards to help build tower houses. But how far would £10 take you to finish the job? The Ormond Deeds have only a few details on what the cost of medieval building materials were. In 1544 the price in Irishtown for a cartload of wood was three pence or one penny for a bundle of wood.[13]

The thirteenth century saw a wave of large stone castles but by the fourteenth century people were just happy to keep the castles they had built. The Ormond Deeds provide a glimpse into the fabric of some of these castles. In 1307 the castle upon the motte at Callan was mostly built of wood with just one stone structure. The main hall was a timber building with a roof of wooden shingles.[14] In 1338 the Earl of Ormond held the manor of Weyperous in north Tipperary upon which was a castle with one hall and one chapel with a thatched roof and two rooms covered in tiles.[15]

Early medieval houses just left the smoke go out through the thatched roof or a high window. Over time people developed the idea of installing a chimney to take the fire away from the centre of the room and channel the smoke out of the building. In 1539 Hugo Fere, merchant of New Ross, took a ten year lease on a house in New Ross from Piers Butler, Earl of Ormond, for 13s 4d per year with the provision that Hugo would keep the house in good repair and build a ‘good and sufficient chimney in it at his own expense’.[16] In 1558 Giles Alene, saddler of Dublin, took a twenty-one year lease on the Earl of Ormond’s house in Dublin called ‘The Carbre’ in which Giles was to build a chimney in the kitchen of the house from materials supplied by the Earl. The roof of the house was to be covered with lead, pin and slate.[17]

The Earl of Ormond’s house in New Ross

The Earl of Ormond had his chief residences at Kilkenny, Gowran and Carrickmacgriffin (now known as Carrick-on-Suir). But he also required other residences as his travelled around his vast estates spread over many counties. In April 1567 Francis White, merchant of New Ross, acquired a lease of 189 years on a waste orchard and garden on North Street in New Ross. On this ground Francis was to build a slate house to lodge the Earls attendants when the Earl of Ormond came to town and provide a bed for the Earl. Francis was also to build a house of good stone walls with a slate roof on the site. For this building works and other improving Francis was to spend £200.[18] 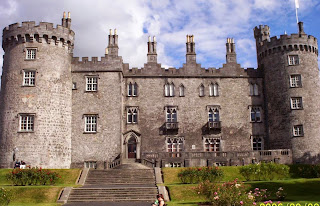 In the fifteenth and sixteenth centuries people moved away from the two storey hall house with its entrance door on the first floor to a tower house of four or five storeys with the entrance door at ground level. The present landscape is littered with these tower houses particularly concentrated in the good farming land of Wexford, Kilkenny, Tipperary and especially in Limerick. It is estimated that there were 2,000 to 3,000 tower houses in the country. Although most experts converge towards the lower figure the existence of wooden towers must make 3,000 a more likely total as not every tower house was made of stone.[19] In 1549, Sir William Whelan, rector of Listerlynge, owed Thomas Butler, Earl of Ormond, £100. One of the conditions of the bond was that with five years of January 1549 William Whelan was to build a timber castle with glazed [windows] and a slate covered roof. The castle was to be surrounded by a ‘wall of green sods’ or a bank of earth, for defence. William Whelan also had to build a bake-house and plant an apple orchard.[20]

In 1547 Richard Fitzwilliam Fitzjohn Butler was commissioned to build a stone castle on the manor of Kilcash at a place called Brittas. The townland of Brittas is located north of Kilcash along where the N76 ascends upwards through Glenbower glen. The name Brittas means a wooden tower or castle.[21] The stone castle was to be three storeys high with a vault over the ground floor. The same ground floor was to be fourteen foot high with walls six foot thick. The two upper floors were to be ten foot high with walls four foot thick with a chimney on each of the upper floors. Good lime and stone was to be used and doors and windows fitted with all other things necessary for a castle. The surrounding wall was to have an iron gate while the castle was to be fitted with a barbican. One master mason and one master carpenter were to be employed while Derby Ryan and the treasurer of Lismore were to inspect the finish castle.[22] Interestingly no garderobe was mentioned.

We often think of property developers as something of the late twentieth century and early twenty-first century. Yet earlier centuries also had property developers including the medieval period. In 1585 Thomas Butler, Earl of Ormond, made a lease of twenty-one years to Maurice Tobin of Knockgrafton of lands at Kent’s Graig and Garrytobbed, Co. Tipperary for £3 6s 8d per year. As part of the lease Maurice was to strength the mansion house at Garrytobbed with ditches and a gate while also committing to build four houses on the property.[23]

In 1585 Thomas Butler, Earl of Ormond, made a lease of twenty-one years of the lands at Bowlentle, Co. Tipperary, to Thomas Comerford and his brother Richard Comerford for 6 marks per year. As part of the lease the Comerfords were to build six good thatch houses on the property with a strong defensible garden and gate.[24]

Mills were an important part of the Anglo-Norman manorial economy with most of the area of a manor devoted to tillage.[25] In 1416 James Butler, Earl of Ormond, had two corn mills by the River Nore in Kilkenny made of stone. In 1509 Sir Piers Butler had three corn mills made of stone near Kilkenny beside the River Nore.[26] The fact that these mills were specifically referred to as been built of stone would suggest that most mills was made of timber and mud. In 1288 William the Miller was to cover the cost of timber and other materials to construct a new mill and weir in the manor of Dunmore.[27] This would suggest that the mill building was made of timber.

In 1556 Thomas Butler, Earl of Ormond, made a twenty-one year lease of an old decayed water mill at Gerypond with its water course, weir and fishing for £6 per year to Oliver Grace of the Lagan. But before Oliver could start earning money by graining corn he had to repair the mill, at his own expense. The materials required for the mill were lime, stone, slate and timber. To help pay for this work, Oliver Grace also received a lease on the town of Bennetsbridge with its operating water mill (£10 per year for 21 years) and another lease on lands at Ballylower and Kilcolme (£4 per year for 21 years).[28]

Medieval mill with a sad miller

Today we see the ruins of old castles and mills and hear stories of the great lords who had them built yet just like today construction workers were needed to make the dreams reality in stone and timber. Something of the pay and conditions of these workers can be found in old documents. In 1537 the portreeve and burgesses of Irishtown set the wage of an ordinary carpenter and mason (and any apprentice) at three pence per day plus meals. A master mason or carpenter could earn six pence per day. A labourer employed at ditching or digging was to get one pence in winter time, two pence in spring/summer time and three pence in autumn.[29] By 1566 the rate of pay of a master mason or carpenter was still six pence per day with meal and drink. But the wages of an ordinary mason or carpenter had risen to four pence while an apprentice was still paid three pence.[30] In 1581 a thatcher in Irishtown was paid two harpes, or two sickles, per day.[31]

At Exeter, in the 1370s, the glaziers were the wealthiest members of the building trade (paying 8.7d in murage tax) followed by carpenters (6.7d), then masons (5.6d) and roofers (5d) with others paying 4d in taxation. Quarry worker didn’t get a mention in the wealth rankings. Construction workers were generally at the poorer end of the social scale.[32]

Occasionally people not normally associated with the building trade would be asked to supply material or products. In 1605 a smithy in Irishtown was paid nine pence to bend iron for window bars and door hinges.[33]

The building environment of the medieval world was a rich and varied place. From timber castles to stone castles and property developers speculating while other people employed new innovations like chimneys and different types of mills and construction workers paid different rates for different skills. The medieval world is often called a foreign country as they do things differently there but the building environment has lots of similarities with our own time.