Lacock Abbey and remembering the dead

Lacock Abbey and remembering the dead

Today we erect headstones to mark the graves of our loved ones. In medieval times wealthy people erected abbeys and priors to remember their loved ones in stone while people of lower status donated plots of land to these religious houses or financial donations in their will. This article examines the documents of Lacock Abbey in Wiltshire to see how medieval people were remembered there.

Ela, Countess of Salisbury, remembers her husband and relatives

During her widowhood, Ela, Countess of Salisbury, had the desire to found monasteries to remember her deceased relatives and pray for her children. In the foundation charter [1229] the Countess gave the manor of Lacock along with the advowson of the local church to make there an abbey of nuns “for the souls of Earl William Longespee, her husband [deceased], and all his and her own predecessors, and her own health and that of William Longespee, her first-born son and all her other children and heirs, to Blessed Mary and St. Bernard”.[3]

Her third son, Stephen de Longespee was sometime Seneschal of Gascony and Justiciar of Ireland while her fourth son, Nicholas, was Bishop of Salisbury in 1291-97. Her eldest daughter, Isabel, married William de Vescy which family later inherited the Liberty of Kildare, while her second daughter, Ela, married Thomas, Earl of Warwick (1242) as her first husband and secondly to Sir Philip Basset.[4]

On 20th April 1230 the dean and chapter of Salisbury [in which diocese Lacock is situated] agreed that Ela may found and construct an abbey of nuns of the order of St. Augustine and dedicated to the Blessed Mary.[5] The new monastery was officially opened by Countess Ela in April 1232. On the same day she inaugurated two houses; Lacock in the morning and Hinton Charterhouse in the afternoon. In 1238 Ela, Countess of Salisbury, took the habit at Lacock after serving two terms as sheriff of Wiltshire. In 1240 she became abbess of Lacock. After seventeen years in charge Ela retired in 1257. She died in 1261 and was buried in the choir of the church. After the dissolution of the monasteries the church was destroyed but the cloister buildings remained standing. Today part of Ela’ tomb lies in the south walk of the cloister.[6] 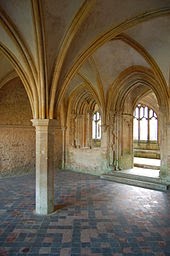 Shortly after the chapter of Salisbury granted permission for the founding of Lacock Abbey other important locals gave donations in return for prayers for their deceased relatives. In 1230 the widow, Constance de Lega, gave to Lacock all of her manor of Woodmancote in Gloucestershire for the souls of her father, William de Lega, and her mother, Mabel de la Mare.[7]

Amice, Countess of Devon, remembers her parents, husband and relatives

Another titled widow who gave donations to Lacock in exchange for prayers for deceased family members was Amice, Countess of Devon. Sometime between 1245 and 1265 she gave the manor of Shorwell, Isle of Wight, to Lacock in return for prayers for the soul of her father, Gilbert de Clare, Earl of Gloucester and his wife Isabel; for her late husband, Baldwin, Earl of Devon and their son Baldwin, Earl of Devon along with all her sons, brothers and sisters and all living and dead kinsfolk for which Amice was specially bound to pray for. This gift in free alms was confirmed about 1265 by her daughter Isabel, Countess of Aumale, and after 1263 Countess of Devon. Isabel’s husband, William de Forz, Earl of Aumale had died in 1260 and in the confirmation of her mother’s gift; Isabel added prayers for the soul of her parents, of her late husband and of her late brother, Baldwin, Earl of Devon. Isabel’s sister, Margery, had a sometime joined Lacock Abbey as a nun and in a later deed Isabel added her sister’s name in the list of prayers for the dead.[8]

Other widows of more modest means also gave to Lacock in return for prays. Anastasia de Pavely gave a rent of 20 shillings in the manor of Westbury, Wiltshire, for her soul and that of her late husband, Roger de Baskerville. This gift was confirmed by her father Walter de Pavely.[9]
Another donor in her widowhood was Dame Catherine Lovel, sister of Philip Basset (second husband of Ela, Countess of Warwick). Sometime between 1257 and 1271 Catherine Lovel gave to Lacock Abbey all the land she had purchased in Westlecott for her own soul and that of her late husband, John Lovel.[10]

A man remembers his parents

In a separate charter, Walter de Pavely gave Lacock half a mark of rent he used to receive from William de Rugdun and Joan his wife. This half mark was to pay for a lamp to burn day and night in the abbey church and prayers for his soul and that of his father, mother and ancestors. Walter’s son, Reynold de Pavely confirmed his father’s gift and bound himself and his heirs to continue the payment to Lacock. Reynold’s confirmation said that the abbess’s messenger can take the money from Reynold’s bailiff at Westbury church before the third hour on Palm Sunday.[11] A few years later Joan de Osevilla gave Lacock a yearly rent of 40 shillings out of a tenement in the parish of Box for the soul of her late husband, William de Rugdun.[12]

Male benefactors also gave property to the new abbey. John de Rivers gave all his land and rent in Heddington in Wiltshire to Lacock. This grant was to support two chaplains for ever who would celebrate daily divine service for Peter’s soul and the souls of all his friends and benefactors.[13] Smaller gifts were also made to Lacock in return for prays. In 1242 Hugh de Burgoyne and Maud his wife gave the rent of 20 shillings which they had previously received for two virgates of land in the manor of Shrewton, Wiltshire. For this gift, Ela, abbess of Lacock, promised prayers for their souls forever in the abbey church.[14]

Rules for remembering the dead

It is not known if Lacock Abbey had rules to ensure that these prayers for the dead were performed. In 1298 the vicars at Wells Cathedral had rules governing their conduct including prayers for the dead. The rule said that “No vicar who has to say daily Mass for a year or half a year on behalf of the soul of some dead person must shirk this duty. For each failure a fine of a penny must be levied ... All those put in charge of these matters and those who keep the lists are bound, in virtue of their oath, to write down the defaulters every Saturday. Anyone convicted of deceit in this matter is to be punished in the severest manner”. The nature of the punishment is not stated.[15] It was important for a religious house, cathedral or parish church to be seen to offer prayers for the dead as the money collected for this act was an important source of income.

Disputes with the parish church over the dead

The local parish church at Lacock, which existed before the foundation of the abbey, was not to lose out of its privileges and financial income from the new abbey of nuns. On 3rd August 1229 Ela, Countess of Salisbury, made an agreement with John, the then rector of Lacock parish, to preserve the parish church privileges. The great and small tithes along with the right of burial were to belong to the parish church. The nuns of Lacock could take church sacraments wherever they wish but the chaplains who celebrated divine service in the abbey church were to swear fealty to the parish rector.[16]

By 1311 disputes between Lacock Abbey and the Bluet family, who owned part of Lacock manor, had arisen concerning the presentation of rectors to the parish church. Simon, Bishop of Salisbury, granted the parish church to the abbey in 1312 because many of the noble and powerful people who supported Lacock were deceased. Yet by October 1316 Lacock was still trying to get full control of the the parish church.[17] But the abbey was not to have free reign in the parish church. They were bounded to say mass daily for the souls of Sir John Bluet and his wife Margery and have four wax candles lighting each day at the four corners of John’s tomb. The Bluet family were also to have rights to nominate a nun to Lacock and in succeeding generations.[18]

Donations in wills to pay for prays

People often left money in their wills to their local religious house and parish church. This money was to support the fabric of the buildings and pray for the souls of the faithfully departed. Those with extra money to spend gave donations to religious houses in the wider geographical area and sometimes outside the county. In 1496 Thomas Chancellor of Bath asked to be buried in the cathedral church at Bath and gave donations to same. He also gave money to numerous religious houses, including Lacock, and parish churches. To Dame Isabel Chancellor, prioress of Lacock, he gave £5 to pray for his soul. It is possible that Isabel was a relation as her name appears among the family bequests of Thomas Chancellor.[19]

Thus at the convent of Augustinian nuns at Lacock there were various ways in which people could remember their dead. These included founding the abbey, giving land, or giving money by way of rental income or donations in a will. In return the nuns were to say prayers for the dead and the donator so that they would stay out of hell and get into heaven by the quickest possible route with the shortest time in purgatory.[20] This continued in Lacock, and at other religious houses throughout the country, until the sixteenth century Reformation of King Henry VIII and his children, Edward VI and Elizabeth ushered in a new form of Christianity.