The medieval town church of St. Mary in New Ross is one of the finest surviving medieval churches. The walls of the chancel along with the north and south transepts are still standing though roofless.[1] In 1813 a new Church of Ireland church was built on the site of the nave as far as the chancel arch.[2] But St. Mary’s church was not the original parish church of New Ross.

The original parish church of New Ross was the Church of St. Michael. This was built on Michael Street by the town’s people and was ministered by Canons Regular. At the dissolution of the monasteries the church was part of the property of Dunbrody abbey. Queen Elizabeth granted the church ‘to the Trinity poor for the maintenance of a secular priest to say Divine Service’.[3] Late in the reign of Queen Elizabeth or early in that of King James the church of St. Michael ceased to be used as a parish church and was used as a warehouse. In the 1640s a few Jesuits reopened the building as a church and it stayed open until 1670 when the Jesuits left New Ross. In 1700 the church site was given over for the building of an army barracks.[4]

The foundation of the church of St. Mary is traditionally ascribed to William Marshal (d.1219) but there is no supporting evidence for this. In about 1227 William Marshal the younger granted the St. Mary’s chapel and the church of St. Evin’s (also in New Ross) to the Priory of St. John the Baptist at Kilkenny. The priory was a house of Regular Canons of St. Augustine and they ministered at St. Mary’s until the dissolution of the priory in 1541.[5] The priory was then granted to Kilkenny Corporation.[6] The tithes of the rectory of New Ross, formerly attached to St. Mary’s, were also granted to Kilkenny Corporation.[7]

The church of St. Mary was a finer and larger building (one of the largest medieval town churches) than St. Michael’s. The parishioners of New Ross asked for St. Mary’s to be made it into the parish church, dedicated to St. Mary and St. Michael. In 1684 Robert Leigh described the church as ‘one of the largest parish churches in Ireland, having a high steeple, crowned with lead, a ring of five bells and a fair pair of organs’.[8] The Norman tower fell in 1763 and damaged part of the nave.[9] By 1792 the whole church was in a ‘most wretched’ condition. In 1800 New Ross Corporation voted £500 for repairs and more money in 1806. In 1813 it was decided to rebuild the church. The new church occupied the nave of the medieval church and was partly financed by a loan of £2.400 from the Board of First Fruits.[10]

The east wall of the medieval chancel has three elegant lancet windows. The gables of the north and south transepts also have three lancet windows with another set of three on the south wall of the chancel. The dressing stone for the windows was Dundry stone, imported from the Bristol area.[11]

The south transept may have been built later than other parts of the church. In the fifteenth century Patrick Barrett, Bishop of Ferns, established St. Mary’s as the diocesan church as the old diocesan seat at Ferns was under attack from the Irish. Bishop Barrett rebuilt the south transept.[12]

St. Mary’s has a good selection of medieval tombstones and effigies, many dating from the thirteenth and early fourteenth century.[13]

The series of photos below follows around the church in a clockwise direction from the west front of the nineteenth century church. 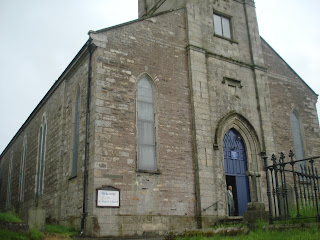 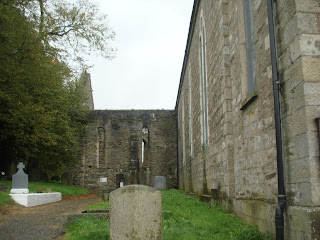 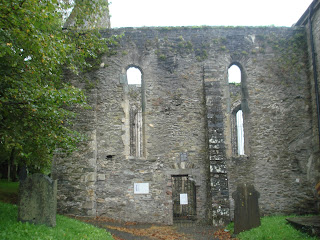 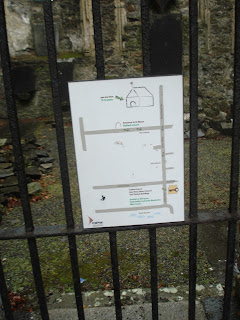 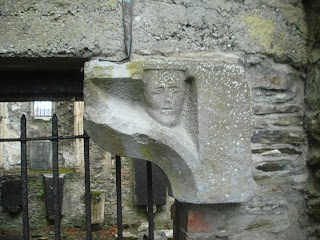 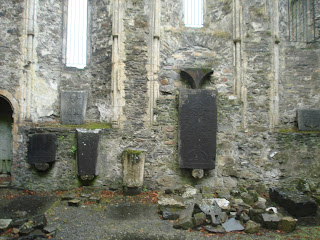 Grave slabs inside the north transept 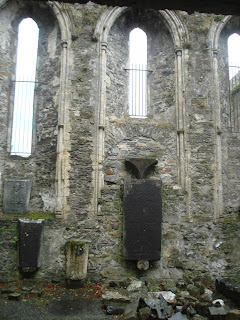 Grave slabs and windows on east wall of north transept 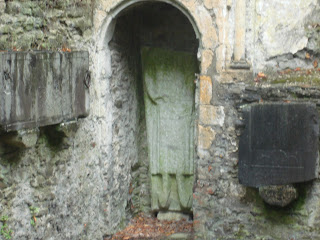 Grave slab in doorway in east wall of north transept 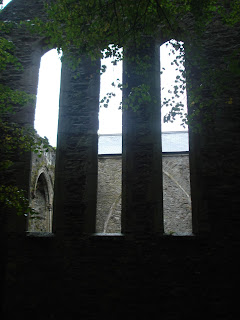 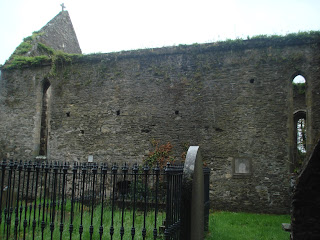 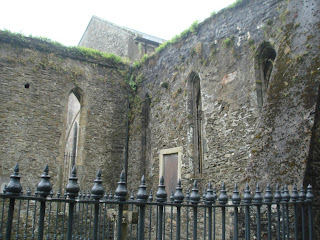 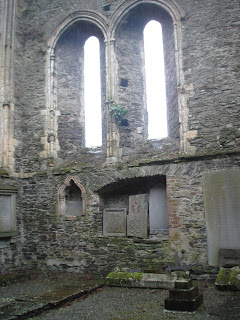 Inside south wall of chancel 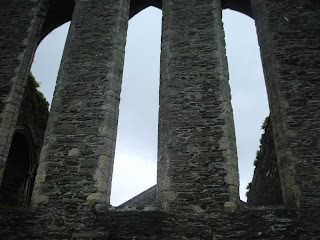 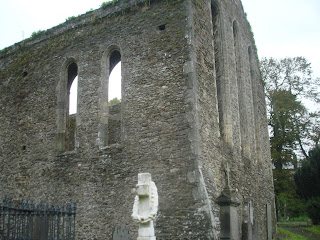 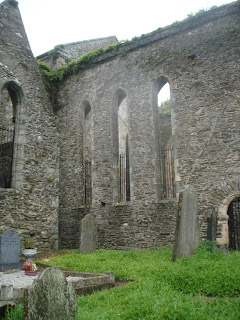 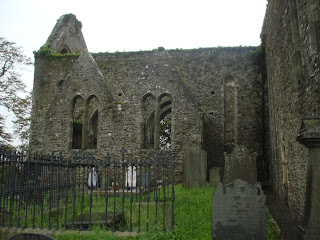 East wall of south transept with two side chapels 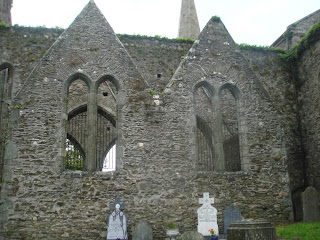 Two side chapels on east wall of south transept 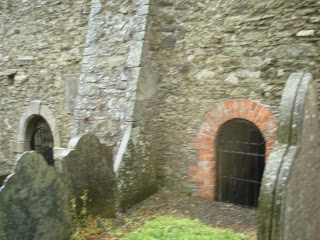 Doorways to the under-croft beneath the south transept 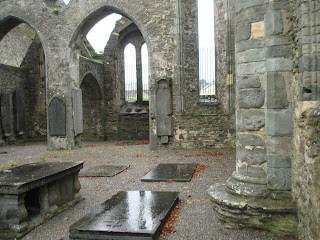 Inside the south transept, looking eastwards 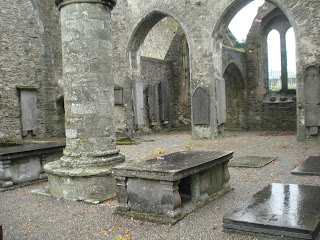 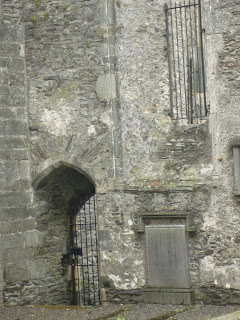 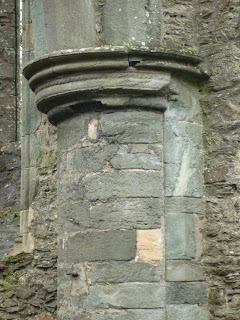 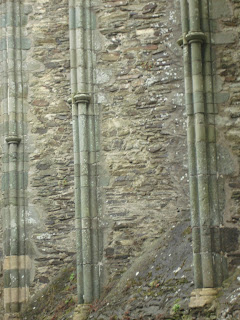 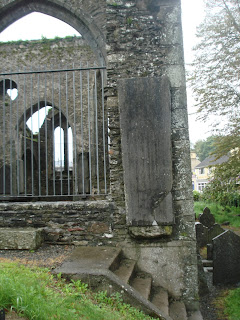 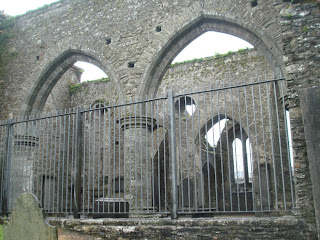 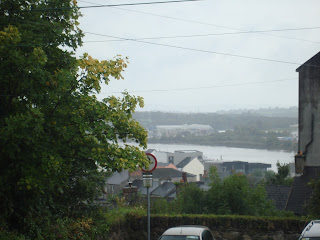 View over New Ross and the River Barrow from churchyard