Some notes on Clonmore manor in County Carlow

Some notes on Clonmore manor in County Carlow

Clonmore is a civil parish in the Barony of Rathvilly in north-east County Carlow. In medieval times the manor of Clonmore was centred in the parish. This article contains a few references to Clonmore manor that survive in the medieval documents.

In the time after the Norman invasion of 1169 Clonmore was situated within the cantred of Ofelmeth. Ofelmeth comprised the modern barony of Rathvilly in County Carlow and northern Shillelagh in County Wicklow.[1] The cantred of Ofelmeth was also known as the Barony of Tullowphelim and was given by King John before 1189 to Theobald Walter the first, ancestor of the Butlers, later Earls of Ormond. William Marshal, lord of Leinster, objected to Theobald Walter having Tullowphelim directly from the king and King Richard II agreed. But Prince John, who was then lord of Ireland, defended Theobald Walter and so Tullowphelim remain as held directly from the king.[2]

In about 1300 the parish of Clonmore was valued at three marks and taxed at 4s.[3] Like many an Irish parish Clonmore had a medieval castle which was situated on the border country between the area controlled by the Normans and that controlled by the Irish. Thus control of the castle changed sides over time.

In 1303 John Wogan held Clonmore castle for Richard le Butler.[4] In about 1330 the castle was captured by the Irish. In 1332 Anthony de Lucy, justiciar of Ireland, led an army into Leinster and recaptured the castles of Clonmore and Arklow which were then in the hands of the Irish. Lysaght O’More of Leix (modern Laois) provided the largest number of troops to take Clonmore.[5] In Easter term 1332 William de Rupeforti was appointed constable of Clonmore castle was spent £20 on repairs to the castle. The government maintained control of Clonmore castle until the 1360s as it was an important defence to protect the English lordship of Carlow from the Irish of the Wicklow Mountains.[6] 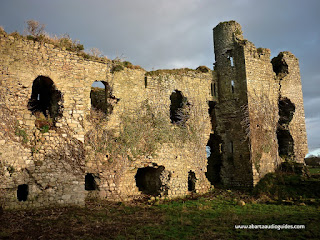 As noted, the Butlers held the barony of Tullowphelim (Tullow), later called the barony of Rathvilly, since 1185. In 1408 James Butler, Earl of Ormond, sued for livery of his estates even though he was still a minor. His father, also called James Butler, 3rd Earl of Ormond, died on 7th September 1405. In 1408 or 1409 King Henry IV granted James Butler his ancient family lands. The castle, and manor of Tullow was then the only property of the Butlers recorded in County Carlow.[7] But the Tullow manor seems to have then included Clonmore which was later made into a separate manor.

By 1538 the Earls of Ormond had increased and developed their property portfolio in County Carlow and Clonmore is mentioned as a separate manor, created out of the larger manor of Tullow. The late development of Clonmore is accounted for because Tullow and Clonmore was on the border between the English and Irish areas of influence. People generally don't like to live in a war zone.

In 1538 King Henry VIII granted ancient property of the Butler family, Earls of Ormond, in the Counties of Kilkenny, Tipperary, Waterford, Kildare, Dublin, Meath and Carlow to Piers Butler, Earl of Ossory and Ormond. The Carlow property included the manors of Rathvilly (this manor was also created out of the larger manor of Tullow), Tullow, Kealasna (Kellistown), Powerstown, Leighlinbridge and Clonmore.[8] 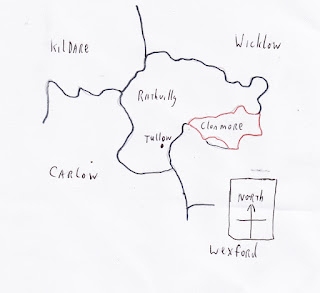 In a separate lease made in 1577 between Thomas, Earl of Ormond, and Shyman Fitzpatrick of Tullaghnemrahir (Tullow), Co. Carlow, the Earl reserved the town or village of Ballyroyll with the appurtenances.[13] The rent on the 1575 lease of Clonmore was 20 marks per year for the first two years and 40 marks yearly for the remaining nineteen years along with 10 poundage hogs, 10 summer sheep and 10 couple of watch hens with half of all heriots, strays and profits of the manorial court.[14]

On 20th March 1600 Thomas Butler, 10th Earl of Ormond, made an indenture with Captain Laurence Esmond to hold the manor and lordship of Arklow in County Carlow for thirty years. The modern county of Wicklow was not yet created by that time. Captain Esmond was to deliver the annual rent of £60 along with 12 barrels of herring (as often as the herring fishing happens in Arklow Harbour) to the Earl’s manor of Clonmore. The lease of Clonmore to Hugh Geankagh had ended in 1596. The Earl would pay 10s for each barrel.[15]

In October 1599 a large part of the estate of Thomas Butler, Earl of Ormond, was granted in trust o Robert Rothe of Kilkenny, Henry Shee, John Fitz Lewes of same and Richard Fitz Richard Comerford of Dangenmore. But John Horsfall, Bishop of Ossory, and Edward Gough, (former trustees of the Earl), claimed that Robert Rothe and associates unlawfully entered the County Carlow lands of the Earl. The objected went to court and was settled before the justices of the Common Bench at Dublin in Michaelmas 1599. The court found that Robert Rothe, Gerald Comerford, Henry Shee and Philip Comerford were the proper trustees of the Carlow lands which included the manors of Rathvilly, Tullow, Arklow and 6 castles, 1,000 messuages, 100 tofts, 4 mills, 100 gardens, 5,000 acres of land, 1,000 acres of meadow, 1,000 acres of wood and 4,000 acres of moor in Clonmore, Killasny, Powerstown, Arklow and Fortenolan.[16]

In March 1602 the manor of Clonmore was included in the lands entailed to Elizabeth, daughter of Thomas Butler, Earl of Ormond, as her marriage portion and inheritance. Other places in Carlow forming part of the entailed included Rathvilly, Tullow, Arklow, Powerstown and Kilasny.[17]

The manor of Clonmore was in Butler ownership throughout the medieval period and into the seventeenth century as is show by this article. It is hoped to record more about Clonmore castle in a future article.