The Fitzgeralds of Ireland: origins and branches

The Fitzgeralds of Ireland: origins and branches

The Fitzgeralds of Wales and Ireland generally take their descent from the noble family of the Gherardini of Florence.[1] In the eleventh century, like many other people across Europe who were on the move, some members of the Gherardini left Florence for France from where they crossed over to England in 1066 and soon after. The earliest member of record in England was Walter FitzOther, constable of Windsor Castle in the closing years of the reign of William I (William the Conqueror). Walter FitzOther died after 1100 leaving three sons; William of Eton, Robert of Little Easton and Gerald of Windsor.[2]

In 1093 Rhys ap Tewdwr, King of South Wales, was killed in battle. His body was not long cold before the Normans disregarded past treaties and invaded South Wales. Pembroke Castle soon became the caput of the new land of Pembrokeshire.[3] So many West Country people and people from Flanders settled in Pembrokeshire that the land became known as Little England beyond Wales. Among the new settlers was Gerald of Winsor who became constable of Pembroke Castle. Gerald found it difficult to live in Pembrokeshire under the near constant threat of attack from the Welsh. Thus he married Princess Nesta, daughter and heir of Rhys ap Tewdrw. Nesta was a formable lady who, in an effort to preserve her inheritance, had an affair with about every Norman knight of any worth up to, and including, the King of England, Henry I. 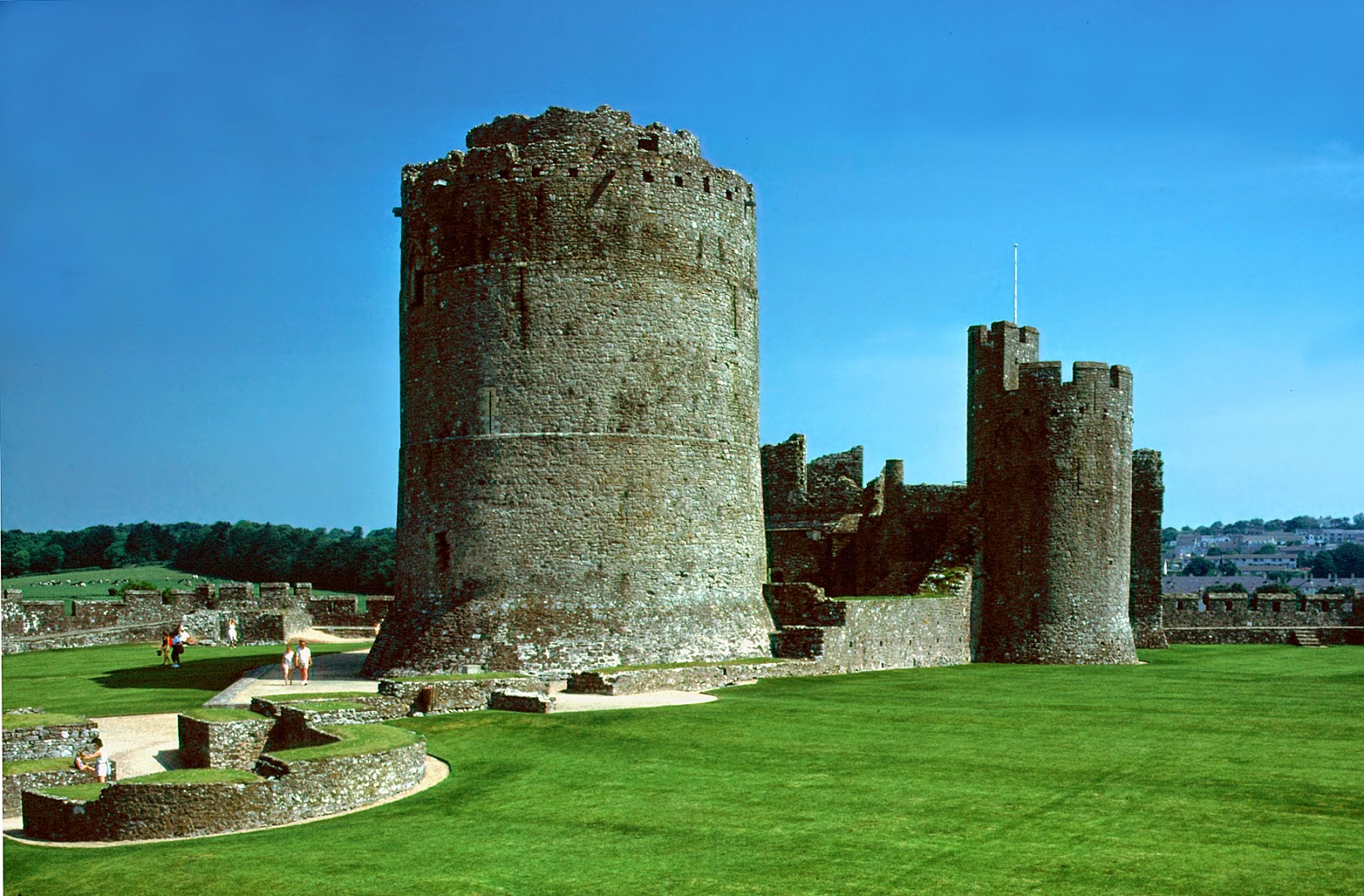 All the sons and grandsons of Gerald of Windsor were involved in the Norman conquest of Ireland. Among the sons of Maurice Fitzgerald were William Fitzgerald who acquired lands in Kildare around Naas and his descendants became Barons of Naas. The second son was Gerald Fitzgerald who got lands in North Kildare (Maynooth), Offaly, Limerick (Adare) and Youghal Co. Cork. Gerald Fitzgerald became Baron Offaly and his descendants became Earls of Kildare. In 1766 a descendant of the 1st Baron Offaly, James Fitzgerald, became 1st Duke of Leinster. Maurice Fitzgerald is the present (2014) and 9th Duke of Leinster. [http://en.wikipedia.org/wiki/Duke_of_Leinster]

The Youghal property was given to Gerald Fitzgerald by Prince John in the 1180s and included the present town along both sides of the Blackwater Estuary in what was called the Manor of Inchiquin. The Barons of Offaly also had title to the land south of the River Bride and west of the River Blackwater in what is now called Knockanore.

Around 1270 Youghal and Knockanore passed to a female heir and then to her husband’s family of de Clare. The last male heir of the de Clare family died in 1321 and the lands were divided among four of the leading families of England. By 1400 the Earl of Ormond had acquired the four parts of Youghal and Knockanore.

The fourth son of Maurice Fitzgerald was Thomas Fitzgerald who acquired a few small estates in present day County Limerick centred on a place called Shanid. It was from this small beginning around Shanid that the Fitzgerald family expanded over the following four centuries to acquire an estate over half a million acres across the Counties of Kerry, Limerick, Cork, Tipperary and Waterford.[5] In 1329 the family was elevated to the title of Earl of Desmond and the last direct male heir to the Earldom, Gerald Fitzgerald, died in Germany in 1630.[6]

When Thomas Fitzmaurice Fitzgerald died in 1213 he left a son, John Fitzthomas Fitzgerald, under aged.[7] As was the practice in medieval times if a male heir was under the age of twenty-one he became a ward of the crown. As such the crown had control of the estates and took the income and profits. The crown also had the right to choose a wife for the young man. Sometimes the crown sold the wardship of an heir to some wealthy landowner in return for up-front money. This is what happened with John Fitzthomas Fitzgerald. In about 1220 he was sold to Thomas FitzAnthony, seneschal of Leinster and Lord of the Decies in County Waterford. Thomas FitzAnthony married John Fitzgerald to his daughter Margery or sometimes written as Margaret.

Thomas FitzAnthony was granted Decies in July 1215 and his descendants by Margery still hold Dromana Castle, one of the chief castles of the Decies. In July 2015 the family of Dromana (Villiers Stuart/Grubb) along with the community of Villierstown celebrate the 800th anniversary of the family’s long connection the Decies (West Waterford). [https://www.facebook.com/dromana800?fref=ts] 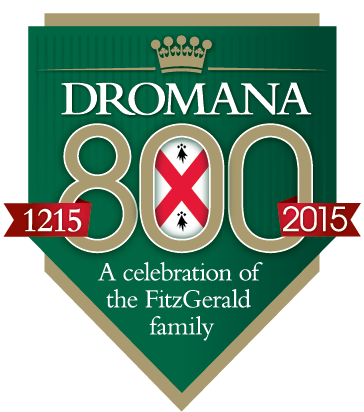 Crest of the Dromana 800 anniversary

Thomas FitzAnthony left five daughters and thus his estate was divided into five equal parts. The five daughters got married and four left children. In 1234 three of the husbands backed Richard Marshal, Earl of Pembroke, son of the most famous knight in Europe, William Marshal, in his war against King Henry III. John Fitzthomas Fitzgerald back the king and got the most land of Decies. This acquisition expanded the Fitzgerald property by three to four times. For more on Thomas FitzAnthony see = [http://celtic2realms-medievalnews.blogspot.ie/2013/09/thomas-fitz-anthony-thirteenth-century.html]

In 1261 John Fitzthomas Fitzgerald and his son, Maurice Fitzgerald were both killed at the battle of Callann near Kenmare in South Kerry. The Fitzgerald family on Munster was virtually wiped out except for a one year old baby. In the panic at Tralee Castle after the battle the baby was left alone. A monkey in the castle then took the baby and climbed to the highest tower and stayed there until calm was restored. The baby grew up to restored the greatness of the Fitzgerald family and carried the nickname of “The Ape”.[8]

Between 1370 and 1460 various Earls of Desmond began to acquire estates along the present county boundary between Cork and Waterford. These lands included places like Aghern, Conna, Ballynoe, Mogeely, Lisfinny, Tallow, Strancally, Shean, and Mocollop. Shortly after 1420 the Earls of Desmond acquired all of Youghal and Knockanore from the Earl of Ormond. By this time the estates of the Earl of Desmond were enormous and stretched from near Waterford city to beyond Tralee.

In about 1430 the 7th Earl of Desmond gave the land of Decies to his younger son, Gerald More Fitzgerald, so as to better manage his vast estates. The land of Decies included much of the land in County Waterford east of the River Blackwater as far east as Stradbally and including the town of Dungarvan. The parish of Templemichael on the west bank of the River Blackwater was also included in the Decies.

Gerald More Fitzgerald was styled 1st Lord of the Decies and became ancestor of the Fitzgeralds of Dromana. His granddaughter was the celebrated Katherine Fitzgerald, the old Countess of Desmond, who lived to be 104 or 140 years old and only died because she fell from a cherry tree.[9] The male line of the Dromana Fitzgeralds died out in 1664 with John Fitzgerald and their large estates in West Waterford descended to his daughter Katherine Fitzgerald. In 1670 Katherine Fitzgerald married Captain Edward Villiers and the Villiers Stuart family who own Dromana in 2015 descend from this married.[10] 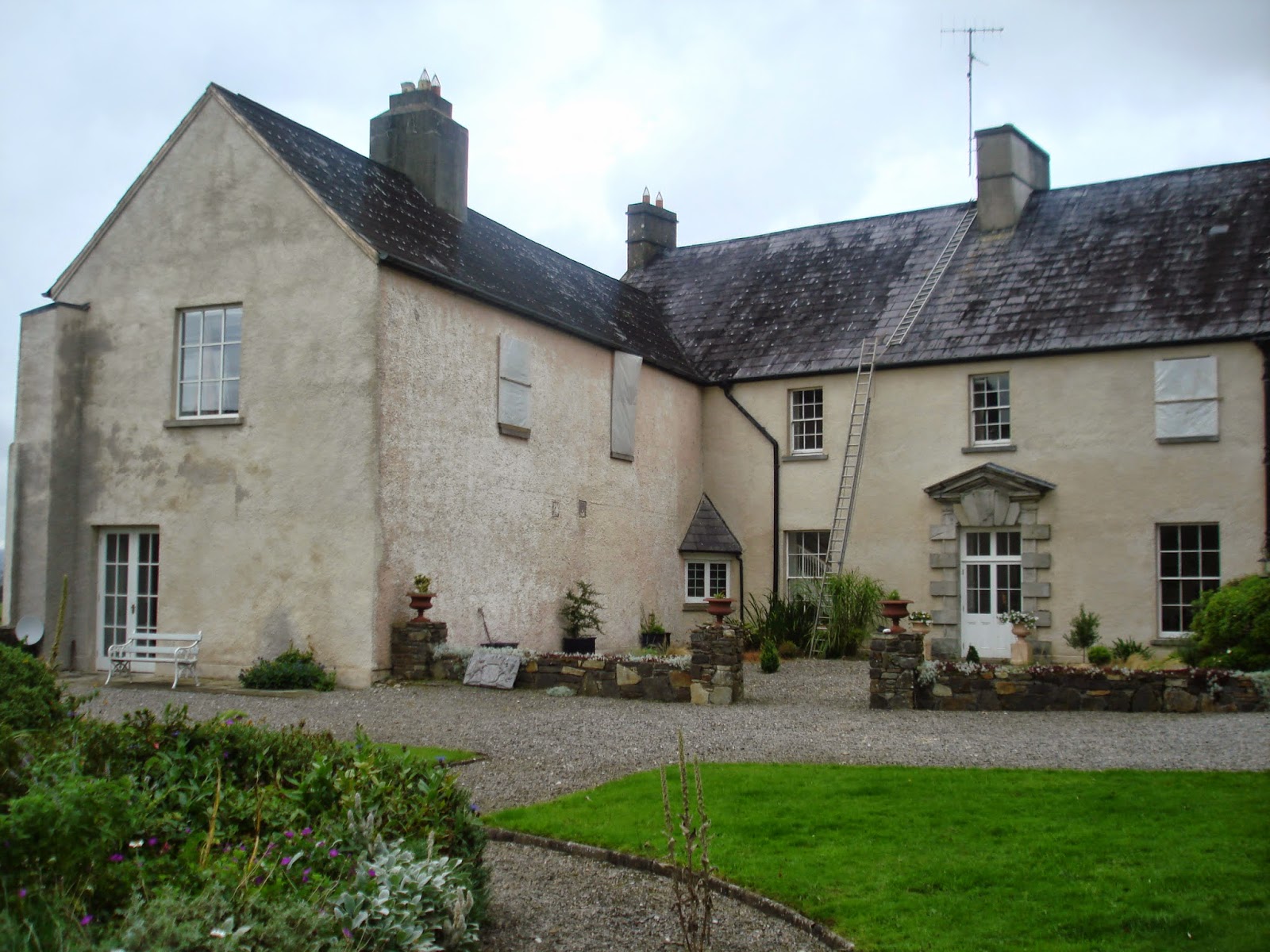 This part of Dromana House incorporates the medieval castle

The title of Knight of Glin, also called the “Black Knight”, has been in dormancy or extinct since September 2011 with the death of Desmond John Villiers Fitzgerald, 29th Knight of Glin. [http://en.wikipedia.org/wiki/Knight_of_Glin] The Knight of Kerry, or the “Green Knight”, is very much alive and Sir Adrian Fitzgerald is the present (2014) and 24th Knight. [http://en.wikipedia.org/wiki/Knight_of_Kerry]

Not every Fitzgerald in Ireland can trace their descent from Gerald of Windsor. For example some Fitzgeralds are descended from an ordinary person called Gerald who in medieval times gave his Christian name to become the surname of their family. Until about the Fourteen century most ordinary had no established surname like today. Instead people were known by where they came from like Andrew of Kilkenny; or by their occupation such as John le Carpenter; or from the name of their father like John son of Gerald. In contrast the Barron family of Kilkenny and Waterford were originally called Fitzgerald but changed their surname to Barron in the Sixteenth century. Elsewhere many people in Devon and Cornwall with the surname of Carew were once Fitzgeralds descended from Gerald of Windsor. They took the name Carew from Carew castle in Pembrokeshire which was once the home of Princess Nesta, the ancestral mother of nearly all Fitzgeralds.