On Good Friday, 1014 (23rd April), the famous Battle of Clontarf was fought to the north-east of Dublin. The battle has been seen by history as the great fight for Ireland against the Viking invaders. A thousand years later it is still remembered as such even though Clontarf was only one of many battles between the Irish and the Vikings.

The death of the hero of the battle, Brian Boru, helped preserved the memory of the battle through the generations. History seems to enjoy the premature death of a hero. We remember today the Battle of Trafalgar (1805) better than the Battle of The Nile or of the Battle of Copenhagen more because the hero of the hour, Horatio Nelson, was killed than it was an important victory. Without Trafalgar there would have been no Peninsular War. Without the Peninsular war, Napoleon Bonaparte would still have possibly lost in Russia but he would have retained the rest of Europe. Yet Trafalgar did not end the war between England and France. It would be another ten years before final victory for England and her allies at Waterloo (1815) brought the war to an end and the end of French military aggression.

A thousand years ago the Battle of Clontarf did end the idea of independent Viking kingdoms in Ireland but Viking aggression across Europe and against Ireland continued. I say Clontarf ended the idea of independent Viking kingdoms in Ireland because for a good number of years before Clontarf the various Viking kingdoms had come under the overlordship of various Irish kingdoms. Limerick, Cork and Waterford were under the various Munster kingdoms while Dublin was regarded as a sub-kingdom of the King of Tara, otherwise, known as the High King of Ireland.

Since 919 the Kingdoms of York and Dublin were united under a single dynasty. After defeating the Limerick Vikings Amlaid returned to York to take on the aggression of King Athelstan. In 938 Amlaid was defeated by Athelstan yet this was not an end. After Athelstan died in 939 Amlaid renewed his power and became King of York and Northumberland. Yet the great kingdom of York was soon lost after the death of Amlaid in 941. Hs successor, Almaid Cuaran returned to Dublin and renewed the idea of a great Dublin kingdom.

The Ireland of the 940s was at the height of the warfare between the Irish and the Vikings. Muirchertach of the Northern Uí Neill had won many victories over the Vikings but in 943 was killed in battle by the Vikings. This victory did not bring clear victory to the Vikings. Next year, Congalach, king of Brega united with Broen, king of Leinster and attacked Dublin with a large army and sacked the city. Congalach was recognised as King of Tara and overlord of Dublin. From that time the lordship of Dublin (and control of its profitable economy) was taken as a perquisite to the High Kingship of Ireland.

But Irish kingdoms before, and even long after, the Norman invasion of 1169 only recognised an overlord king as long as that superior king displays the power of a king. This environment of independent kingdoms did not really end until the Flight of the Earls in 1607. Only then could Ireland be described as one country. When the overlord king showed weakness the subkingdoms reassert independence or recognised another overlord. In the 940s Dublin often revolted against Congalach until defeated by Congalach in 948. Yet Dublin continued to shift is loyalties and hold ambitions of power.

In 980 this struggle came to a head with the defeat of Dublin at the Battle of Tara by Mael Sechnaill of the Southern Uí Neill. The hostages and tributes claimed by Dublin across much of the Irish midlands were released. Amlaib Cuarin left Dublin for Iona and in 989 Sitric Silkenbeard, the new king of Dublin, continued the recognition of overlordship by the King of Tara.

There now entered upon the scene Brian Boru, king of the Dal Cais (modern day County Clare) and King of Munster. Brain succeeded his murdered brother as king of Dal Cais and set forth to destroy the Eóganacht hold on the Kingship of Munster. Before Brain the various Eóganacht branches competed for the title as King of Cashel (otherwise known as the King of Munster) with other kingdoms in Munster just looking on. Brain swept them al aside and took Munster.

After Munster Brian’s ambitions were to be High King of Ireland and he used the Vikings of Ireland in his quest. In 984 and 988 he employed the Viking fleet of Waterford; in 1000 he used the cavalry of Viking Dublin and later, in 1006 and 1007 he used the Dublin fleet in his northern campaigns.

The victory of Clontarf in 1014 was not the greatest victory but that of 1002 when Brian Boru was recognised as High King of Ireland. Brian’s victory opened the door to the High Kingship to all ambitious Irish kings. Before 1002 the High Kingship was the preserve of the Northern and Southern Uí Neill. Other Irish kings ended their ambitions with becoming provincial king. Brian Boru broke the mould by going for the High Kinship and winning. So much was his victory that after his death at Clontarf Brian Boru wasn’t taken back to Kincora, his capital in Dal Cais, but to Armagh, seat of the senior cleric of the Irish church and a position within the rebellious Northern Uí Neill.

After 1002 any ambitious king who sought power beyond the limits of his kingdom could not just stop at achieving the status of provincial king but must move onward to make a challenge to become High King. The rise of Brian Boru can be seen in the same light as the rise of Hugh Capet in France. On the death of the childless Ludwig V the French elected a Frenchman as king instead of picking another German like the Caroline family of Ludwig.

But Brian Boru was no total revolutionary. He may have challenged and won against the established monarchy in Munster and at Tara yet he did not abolish or annex the independent kingdoms into one Ireland. He did absorb the Viking kingdom of Limerick into Dal Cais and made Limerick his new capital but that was the furthest extent.

What was Clontarf was all about? It had two big issues – one was the suppression of the rebellious Leinstermen while the other was the suppression of the Dublin Vikings. In 1013 the Vikings were growing in power across Europe. This culminated in the Danish king, Sweyn Forkbeard, becoming king of England. The Viking king of Dublin, Sitric Silkenbeard, saw his chance for freedom. Using his connections as brother-in-law of the King of Norway, Sitric assembled a large army from across the Viking world. This force was joined the Leinster kingdoms as they too made a bid for freedom from Brain Boru. 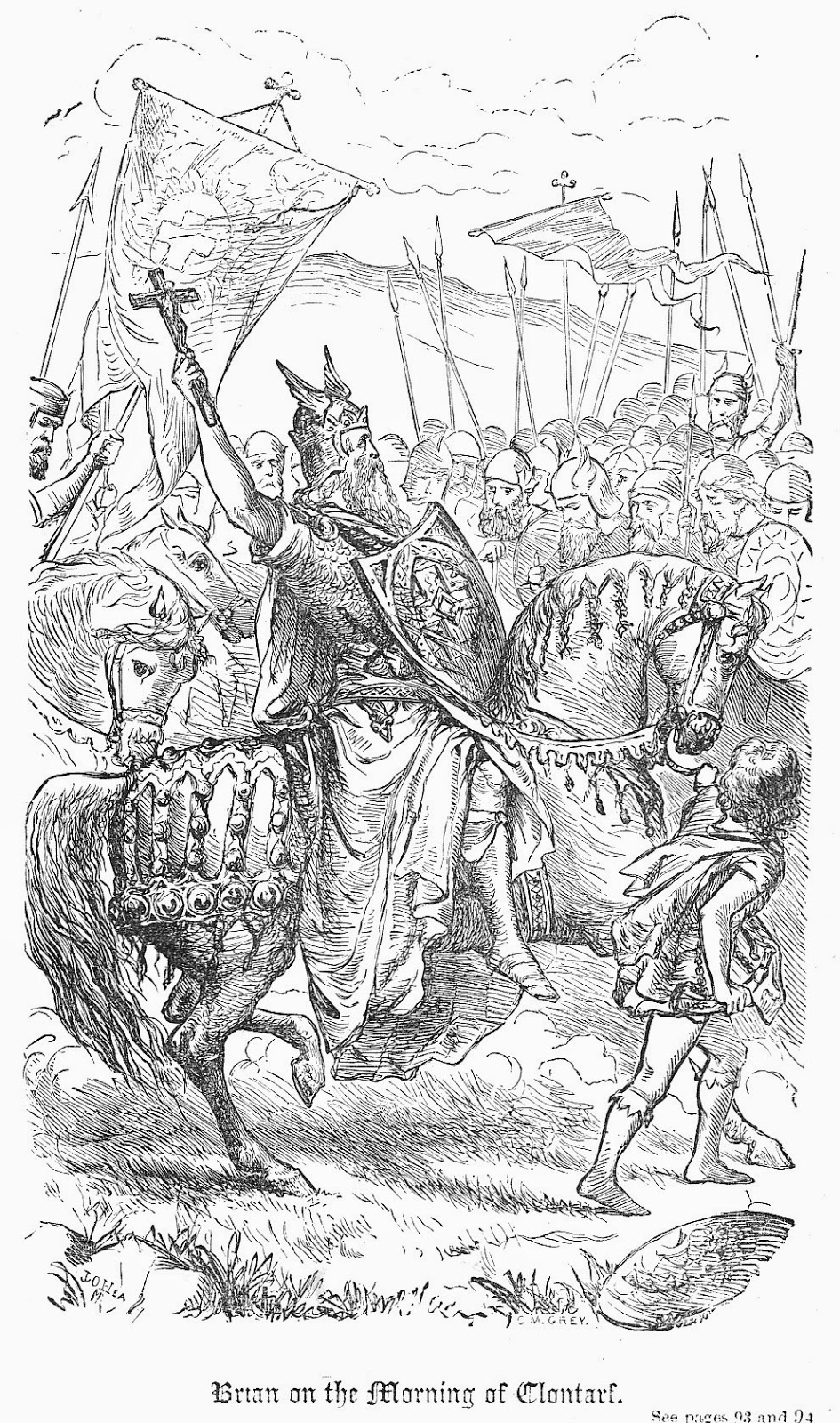 Opposing this army was Brian Boru, High King of Ireland and his defeated High King, Mael Sechnaill. Both were married, at different times, to Sitric’s mother, Gormlaith. The Vikings of Waterford and Limerick joined the army of Brain Boru.

The two armies came to meet near Dublin on the north bank of the River Liffey. After a day long battle at and around Clontarf the Vikings and their Leinster allies were defeated. But, just as at Trafalgar, the celebrations of the victors were muted by the death of their leader, Brain Boru, killed in his tent by a Viking running from the battle. The reigning family of Brian Boru was also cut down. His eldest son and successor, Murrough was killed as was his son – three generations wiped out.

After Clontarf the power of the Dal Cais power was reduced for a time and Mael Sechnaill Uí Neill was restored as High King. Over the succeeding decades, control of Dublin and the High Kingship passed between different kings. Tairdelbach was accepted as King of Dublin and High King of Ireland in the 1070s and his son, Muirchertach was crowned High King at Dublin. Muirchertach made Dublin his capital and control of the city was seen as key to becoming High King. The Normans also saw Dublin as the key to controlling Ireland and retained control until 1922.

The remembrance and glory of Clontarf was encouraged by Muirchertach O’Brien in the Brjanssaga (Brain’s saga) and in the Cogad Gaedel re Gallaib (The War of the Irish with the Foreigners). Both works portrayed the battle as a victory of good over evil – the Christian Irish over the pagan Vikings. The propaganda of the O’Brien scribes portrayed the reign of Brian Boru as a golden age of Irish unity and Clontarf as the great victory of the foreigners. The reality was that there was little in the way of national political unity before, or after, Brain Boru. The defeat of the foreigners was a recognised result but a third of the opposing army at Clontarf was made of people and kings from the Kingdom of Leinster.
The long shadow of Clontarf was taken up by later writers who followed the O’Brien propaganda of a glorious victory that ended foreign plans to control Ireland and ended a golden age. Yet the golden age of monastic illustrated manuscripts was well gone before Brain Boru and the fine structures of Romanesque Ireland came after 1100.

Towards the end of English rule in Ireland the shadow of Good Friday 1014 stretched long. It cannot have been lost on those who went out in rebellion in 1916 that they began their fight on Easter Monday. They had hoped to start on Easter Sunday – the day of the Resurrection of the Lord and the resurrection of Ireland. As good Catholics they could not start the fight on Good Friday 1916. Yet, remembering that an army does not march on an empty stomach that was not a bad deferment.

Long after 2014 the story of that battle at Clontarf in 1014 will be long remembered and told around firesides on dark winter nights to fill people with hope when dark clouds threaten.