Huish manor in Wiltshire: from death to debt

Huish manor in Wiltshire: from death to debt

This article sets out to follow the descent of a Wiltshire manor from Domesday to 1363. A manor which for one hundred and fifty years and more was held by the Doygnel family such that the place became known as Huish Doygnel. A strange succession deal along with a few quick deaths and one person’s excessive debt destroyed the Doygnel connection with Huish. 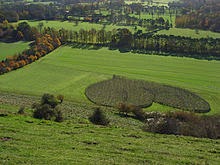 In the Domesday Bok of 1086 Richard Sturmid, an officer of King William, held Huish in the hundred of Swanborough which was then known as Iwis. The land contained three carucates of which one carucate in demesne with 4 serfs. There were three villeins and four coscets with two carucates. There was also four acres of meadow and a wood one mile long by four furlongs wide. The holder of the property in the time of King Edward was not stated but the value of the property, rated at one hide and a virgate and a half had increased from 30 shillings in 1066 to 60 shillings in 1086.[2]

It would appear that Richard Sturmid was a good landlord. His other property in Wiltshire, Cuvlestone also increased in value from 15 shillings in 1066 to 30 shillings in 1086.[3]

Huish manor and the Doygnel family

The manor of Huish next appears in the records during the reign of King Henry III. An undated extent was made of the lands in chief of the king held by Robert Doygnel during that reign. The twelve jury men who met at Huish found that Robert Doygnel held land in demesne worth 40 shillings, rent in assize worth 33 shillings and a meadow worth half a mark. He held no pasture in his own right and thus the total value of his property was 79 shillings 8 pence.[4]

In addition to this property, John Doygnel and Simon de Ordeston had enfeoffed Silvester Doygnel and Margaret, his wife, of one virgate and one acre of land at Huish in return for one rose per year. This land was worth 16 shillings 7 pence. Silvester and Margaret also had 3 virgates of land in West Tokham worth 30 shillings for which thy paid 24 shillings per year to Cristiana Spileman.[5] The second inquisition found the enfeoffment at Huish was made about 1278 while the property at West Tokham was acquired about 1269.[6]

Silvester Doygnel and Margaret also held property at Dreton Passelewe in Buckinghamshire by enfeoffment of Alexander son of Robert Myle. There they held a messuage, 77½ acres of land, 6 acres of meadow and 5 shillings of rent. This property was acquired around 1286 and was held from Woburn Abbey by service of 12 pence yearly.[7]

Peter Doygnel inherited his father’s lands when he became of age in 1300. In October 1313 Peter Doygnel and his wife, Amice, granted 1 messuage and 4 virgates of land at West Tokham to William de Wynselawe. It would seem that Amice Doygnel had died by 1317 when Peter Doygnel is solely mentioned as landlord of 8 acres and 3 roots of land in Ore.[8] Sometime after Peter Doygnel married Agnes Burdon, a widow.

Around the year 1346 Peter Doygnel, knight, died leaving as heir, his son Silvester Doygnel who was then aged about 30 years. The subsequent inquisition found that Huish was held in chief of the king by 13 shillings 4 pence in yearly service. The jury found that long before his death, Peter Doygnel gave Huish to Sir Patrick, parson of Yatesbury church, John de la Roche and Sir John de Whetlaye, vicar of Yatesbury to hold in trust for Peter and his wife Agnes, with reminders to Thomas, son of Thomas le Blount; then to Peter le Blount, brother of Thomas son of Thomas and then to Nicholas de Cottelegh. After the expiration of all these reminders the manor was to pass to the right heirs of Peter Doygnel.[9]

It is interesting to note that Thomas le Blount the younger was married to Margaret, daughter of John de la Roche, one of the three trustees of the Doygnel estate. Medieval people liked to arrange things and keep things in the family. It looked good in the papers and didn’t upset people at breakfast!

Agnes Doygnel died on 6th May 1349. Her inquisition post mortem found that she held the manor of Huish for life by the gift of the three trustees mentioned above. This was held of the king in chief by the service of petty serjeanty of 13 shillings 4 pence per year. Agnes Doygnel also held the manor of Yatesbury in dower of the inheritance of Nicholas Burdon. Edward, Prince of Wales, was the lord of Yatesbury and the property was held by knight service. This Nicholas Burdon was a son of Agnes and was aged 40 and more in 1349.[10] It is very possible that Nicholas Burdon was a son of Agnes Doygnel from a previous marriage. We are told he was her heir in blood.

The Burdon family had their chief Wiltshire residence at Paulesholt. This was held by Sir Nicholas Burdon at the time of his death in 1273. Sir Nicholas was succeeded by his twenty-seven year old son, Robert Burdon (born c.1246). Robert Burdon held Paulesholt at the time of his death in 1280 and was married to a woman called Marie. Robert Burdon was succeeded by his forty year old son, Nicholas Burdon (born c.1240).[11]
In 1292 it was recorded that Nicholas Burdon held land at Fogheleston by Wilton. This land was not mentioned in his inquisition post mortem but was held by a kinsman, Edmund Burdon in 1362. This Edmund Burdon also possessed Yatesbury by that time which Nicholas Burdon once held and had given the old family estate at Paulesholt to trustees.[12]

An addendum document to the inquisition of 1301 says that Agnes was the wife of this Nicholas Burdon and that the eleven year old son was her son. This would make the Nicholas Burdon of 1349 a fifty-nine year old person and not forty according to the jury return.[17] As said above, sometime after 1317 Agnes Burdon, a widow, married Peter Doygnel, a widower. 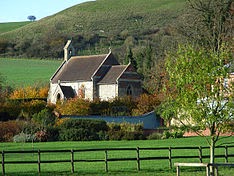 The succession deal of Peter and Agnes Doygnel

Earlier we observed the succession deal of Peter and Agnes Doygnel. This deal made Thomas le Blount the younger as first heir with his brother Peter le Blount as the second heir and Nicholas de Cottelegh as the third named heir. The deal seems strange. It was mentioned that Thomas and Peter le Blount were grandsons of Peter Doygnel.[18] Their mother was Anastasia Doygnel, daughter of Agnes and Peter Doygnel. Yet Anastasia had a brother, Silvester Doygnel. Silvester Doygnel was 30 years old when his father died and was of age to inherit in the normal run of things but he didn’t. One is even surprised that Silvester Doygnel was not named as first heir in the succession deal.

In other inheritance documents mention is made of any disability with the heir. We read of John Thymulby of Lincolnshire who was congenitally insane when his father died. In Herefordshire Thomas Wouton was thirty years old and heir to his father but was “a fool and an idiot from birth” thus the family property was taken into state care.[19] No such disabilities are mentioned in relation to Silvester Doygnel. There was clearly something going on in the Doygnel household that the absence of documents makes it difficult for us to understand.

By the time Agnes Doygnel died in 1349 the first named heir was dead. This was Thomas le Blount, son of Thomas le Blount. His wife, Margaret, daughter of John de la Roche was also dead. They left no children. Thus Peter le Blount, brother of Thomas, was the next heir and was eight years old in 1349.[20]

Peter le Blount succeeded to Huish manor before he achieved his majority. But he did not long enjoy his inheritance as he died before July 1361. The subsequent inquisition post mortem found that Huish and the other family property was in a rundown state. The capital messuage at Huish generated no income while one of the two dovecotes was in ruins. Much of the farm land was held in common by the tenants leaving little room for improvement. Yet still the approximated value of the manor was a respectable £7 14 shillings 4 pence.[21]

When Peter le Blount died the jury which met at Marlborough, in July 1361, for the inquest into Peter’s property found that his uncle Silvester Doygnel was alive and was aged forty years. The jury declared Silvester Doygnel as the next heir but acknowledged that John de Cottelegh was heir of Huish under the succession settlement.[22] But for a time none of the heirs entered into the possession of Huish. Instead Huish was taken into the king’s hand. On 20th September 1361 Edward III presented Roger de Hanyndon, chaplain, to the church at Huish.[23]

It was mentioned that Thomas and Peter le Blount were grandsons of Peter Doygnel.[24] It is possible and likely that Nicholas de Cottelegh was also a relation of Peter Doygnel but the nature of that relationship is as yet unclear.

An undated document records the grant by Philip Percy of some land in the furlong of Stapleway in Dorset to Nicholas de Cottelegh.[27] More firmly dating evidence of the Cottelegh family is provided in a taxation roll of 1327.

In July 1361 the jury which met after the death of Peter le Blount found John de Cottelegh was heir to Huish in Wiltshire by the Doygnel family succession settlement. Sometime after September 1361 John de Cottelegh acquired full possession of Huish. The inheritance was a welcome addition to John’s income and John needed a lot of income.

By early 1361 John de Cottelegh was in court for unpaid debts. On 9th March 1361, before John Pyel, then mayor of the Staple of Westminster, John Cottelegh of Cherdestoke (Chardstock) parish in Dorset (now in Devon) acknowledged a debt of £500 owed to Gilbert le Despenser. This debt was to be payable by 2nd May 1361 but it would seem the debt was not repaid.[33]

On 30th January 1363 a royal order was sent to conduct an inquisition into the assets of John de Cottelegh so the debt could be recovered. This was to be done and returned by 16th April 1363. The extent of John de Cottelegh’s property in Wiltshire was held in Marlborough on 4th March 1363.

The twelve jury members reported that John de Cottelegh held the manor of Huish with the advowson of the church. There was a house with at least two rooms and a kitchen. Among the outbuildings was a dovecot worth 6 shillings 8 pence along with a ruined dovecot worth nothing. The land around Huish contained 240 acres of arable land (there was 360 acres of arable land in the time of Peter le Blount) worth 3 pence per acre (worth 4 pence per acre under Peter le Blount); 6 acres of meadow worth 12 shillings; pasture in severalty for 18 oxen and 6 working cattle and pasture in common worth 10 shillings; there were rents from various free life tenants but the extent document is damaged at that point and the proper value of these rents is unclear; and finally the perquisites of the manor court with fines was worth 26 shillings 8 pence. The total value of Huish manor was £9 8 shillings 4 pence (increased from £7 14 shillings 4 pence in 1361). In addition to this valuation there were 20 acres of grain sown which was worth 40 shillings. This made a total valuation of £11 8 shillings 4 pence.[34]

Huish was seized for the unpaid debts and over the following sixty years passed through many different owners.[35] John de Cottelegh lost his long sought inheritance and possibly much more. It is not known if he even fully repaid his debts or left any property to his heirs. The loss of Huish, which had become more known as Huish Doygnel, must have been painful for Silvester Doygnel. The family inheritance was gone and he was left without means. Subsequent records do not mention Silvester Doygnel. Thus a strange family succession deal, along with too many quick deaths and one person with excessive debt had ended the Doygnel association with Huish.