The first Irish parliament or just another parliament?

As we approach the year 2015 and the eight hundred year anniversary of the signing of the Magna Carta, which to many people signifies the start of parliamentary democracy, we here at medieval news will post a few articles on Irish Parliaments in medieval times. Assemblies to discuss laws and issues of common concern were held among the Irish kingdoms long before the Anglo-Norman invasion of 1169. After the invasion these assemblies were still held in the Irish controlled areas of the country. Within the English sphere of control a number of different bodies met to discuss the issues of government.

The three bodies of state

The body nearest to the centre of government was the Irish council. It was formed by the chief ministers of the government such as the chancellor, treasurer, escheator along with the justices of both benches. It appears that no minister had a right to attend meetings of the council although the chief ministers were usually present. Instead it was at the justiciar’s discretion who should attend a particular meeting.[1] This body advised the justiciar (the head of the government and the English king’s representative in Ireland) and deliberated on the ordinary problems of administration. The council was joined by other individuals from time to time. In the fourteenth century some people retained life membership of the council.[2]

Further out from the government circle was a “great council”. This body was an extension of the Irish council but with numerous outsiders attending to debate the great issues of the day. These issues usually focused on a certain geographical area and many of the outsiders attending came from this restricted area. There were no prescribed days of notice for a great council unlike the forty days’ notice needed to call parliament and thus the great council could be called to deal with matters of urgency.[3]

Beyond the great council was the Irish Parliament which is the focus of this and subsequent articles. The parliament was composed of four elements, the Irish council, the lords (both spiritual and temporal), the commons and the representatives of the lower clergy.[4] If a full house attended parliament there could be about 120 people. Yet the Irish Parliament remained a single body unlike in England were two houses were formed (the lords and the commons).[5]

Originally the idea of a parliament developed in Western Europe to discuss judicial purposes. Over time parliament took on the role of enacting legislation and by 1300 the Irish Parliament dealt with the important matter of taxation. The legislative role of the Irish Parliament developed slowly as in the first half of the thirteenth century numerous communications were sent from the English king and his council that the laws of England also applied to Ireland.[6]

At the start of the thirteenth century a king only needed the consent of the great magnates in matters of taxation as a lord’s tenants were bound to accept their master’s decision. By the second half of the century many of the tenants had gained in economic value along with the towns. The increasing cost of government meant that kings had to get more taxes from these new rich. It was Pope Innocent III who promoted the idea of various communities sending representatives to an assembly like a parliament to consent to taxation.[7]

The Irish Parliament never developed into a body where ministers were called to account by impeachment or attainder. It remained for much of the medieval period as an embryonic body which was very much controlled by government. The official language was Latin or French but later English was accepted.[8]

The Irish Parliament of 1264

In the late 1250s the English barons waged a struggle for power against Henry III. In 1258 they successfully implemented the Provisions of Oxford whereby parliament was to meet three times per year. These Provisions also applied to Ireland. Thus in the year 1264 we hear of a parliament held in Ireland. This parliament was possibly more a glorified 'great council' than a later more defined parliament. This parliament met in June 1264 at Castledermot. [9] It is unclear if this was the first Irish Parliament or just the first one that we know of. 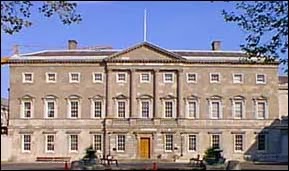 For example, in December 1253 Henry III sent letters to Maurice Fitzgerald and the other magnates of Ireland along with the archbishops and bishops asking them to assemble at Dublin before John Fitz Geoffrey, the justiciar, and debate the threatened war by the King of Castille on the English lands in Gascony. A latter letter on 2nd February 1254 was directed to the archbishops, bishops, abbots, priors, earls, barons, knights and other of the king’s subjects in Ireland to listen to the justiciar about the threatened war by Castille. The persons attending the assembly were to debate how best Ireland can contribute to the defence of Gascony.[10] Was this assembly a “great council” or a “parliament”?

The records do not ascribe any particular name to the Dublin assembly but then we should not worry too much on that point. An assembly was held at Kilkenny in October 1346 which was described as a “tractatus” in the records. This term usually denoted a council which did not have the status of a parliament. But in the roll of Holy Trinity Priory, Dublin, the Kilkenny assembly is described as a parliament. This so called “tractatus” was attended by representatives of the commons as well as by the magnates.[11]

Returning to this Dublin assembly of 1254 we note that the meeting was to debate an issue of national and international importance and so beyond the usual scope of a great council. The Dublin assembly was summoned to attend more the forty days before the event which is the usual time given between the issue of writs to attend parliament and the actual parliament. A great number of people from across the country and across the social strata were invited to the assembly which is a more usual practice for a parliament than for a great council. Thus the assembly of 1254 has much of the characteristics of a parliament and could well be called a parliament. Could there have been gatherings before 1254 that could also be termed as a parliament? A minute search of the records may reveal such a case.

Meanwhile the transactions of the known parliament of 1264 are unknown. The Irish Parliament did not keep parliament rolls on the English model. In fact the first Irish Parliament to leave a record of its enactments was the one held in 1297. The text for that parliament survives not in any government papers but in the Black Book of Christ Church.[12]

There is a suggestion in an ordinance of 1269 for the possible business of the 1264 parliament. This ordinance, from the bench plea rolls, called for the standardisation of weights and measures. It is unknown when legislation was created for this ordinance but a parliament held sometime before 1269 seems a likely place of origin.[13]

Although the Provisions of Oxford were swept away following the final defeat of the English baronial party at the battle of Evesham in 1265 various records suggest that there were about twenty-one parliaments held in Ireland during the reign of Edward the First.[14]