Gloucestershire people hedging their bets in the political instability of 1470

Gloucestershire people hedging their bets in the political instability of 1470

In the winter of 2013-14 the University of Leicester on-line education vehicle, Future Learn, organised a course entitled “England in the time of Richard III”. The course is over six weeks with the first week on that of 25th November 2013. The content of the first week was about the origins and course of the War of the Roses with a discussion on Bosworth Field. Section 1.7 asked participants [of which I am one] to write a 1,200 word piece on “How did the conflicts impact on both the upper and lower classes?”

One of the points in my reply was that during the wars in Ireland during the 16th and 17th century you often find families backing both sides in the war. Thus the head of the Roche family stayed neutral while his son supported the Irish side. When the victorious English came to declare lands belonging to the rebels as forfeit to the crown, Lord Roche was able to show his non-involvement in the war and by such means preserved his family estates. In the 1641-1653 war the head of the Butler family, James, Earl of Ormond led the English forces in Ireland while members of the junior branches of the Butler family were prominent on the Irish side. After the Restoration in 1660 James Butler, by then Duke of Ormond, was able to use his support during the war to restore members of the Butler family on the losing side.

It is possible with research to find families in England, during the War of the Roses, who had members on both sides; not so much as they believed in their respective cause but to be in a position to help the side of the family who ended up on the losing side. Ordinary people caught up in the War also sought out means of surviving. An interesting few documents from Gloucestershire show how ordinary people found ways to end up on the winning side without showing clear support for any side. 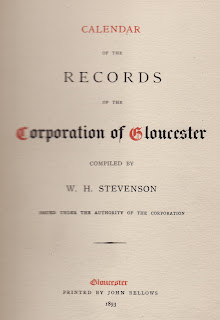 The source book of the Gloucestershire documents

On 2nd January 1469-70 Robert Bole released to Thomas Bokeland, Henry Bold, clerk, John Hertlaund and Nichols Hylle all his right in lands and tenements in the districts of Beggeworth, Uphatherley, Hatherleywood, Great Shurdyngton, Great Bentham and Little Wydecombe. These places are found at various locations around Gloucestershire. Robert Bole was the son and heir of Joan Bole, one of the daughters and heirs of John Brock. Joan Bole, in her widowhood, agreed to the release by another document in December 1470. The January release grant was dated according to the 9th year of Edward IV. Having concluded their agreement the parties went their separate ways happy with the deal.

Both the reign of Edward IV was far from settled. Lancastrian forces remained active in the north of England and in Wales. One of Edward’s chief supporters, Richard Neville, Earl of Warwick, became disappointed at his loss of influence at court against the rise of the king’s wife, Elizabeth Woodville and her supporters. In July 1469 Warwick had gone over to the Lancastrian cause and took the king’s younger brother, George, Duke of Clarence with him. The Lancastrians won the Battle of Edgecote Moor and King Edward was imprisoned for a few months. But by September 1469 Edward was restored. But the country was still unsettled.

The year of 1470 started with more military manoeuvres on both sides as Warwick tried to capture King Edward and Edward tried to capture Warwick. The king was more successful and forced Warwick to flee the country. After getting support from King Louis XI of France, Warwick staged an uprising in the north of England. When Edward went north to crush the uprising Warwick landed a force on the south coast. King Edward turned about to face Warwick but was trapped between the two Lancastrian forces. On 2nd October Edward fled to Holland. The previously deposed king, Henry VI, was now restored to the throne on 19th October.

The people of Gloucester watched these events as did the rest of the country and tried to understand its impacts on their lives. The was talk of the new government obliterating all trace of the reign of Edward IV including declaring all documents dated according to his reign as null and void. If such rumours should come true the parties to the release agreement of Robert Bole feared that their document would have no legal standing because it was dated according to the reign of the now ex-king, Edward IV.

The parties met at an undisclosed location to discuss the situation. After some talk they decided to write out the agreement in the same words as that made on 2nd January 1469-70 but to date it as 2nd January in the 40th year of Henry VI. By such as means they hoped that if their agreement should be produced in court in some legal action, it would be accepted as a “politically correct” document. Delighted with their well laid plan somebody was going to destroy the Edward IV document until stopped by one of the party. “What will happen if Henry goes insane again and Edward comes back? Our newly worded deal will be on the wrong side and have no legal standing”.

After discussion it was proposed by somebody that both documents would be preserved. They would hide the document dated according to the reign of Edward IV and produced that dated to Henry VI for any court action that may happen. If by chance Edward is again king at some future dated, the parties could hide the Henry document and produce the “politically correct” one. All the parties were delighted with their little scheme of how to survive the War of the Roses and the political instability of 1470 in particular.[1]

Somebody called for a toast and “God save the King”. “Which one?” said another. “The one who keeps his head while all the others are losing theirs,” was the reply and all laughed and drank to good health.

It was a wise decision to keep both documents because within a few months Edward IV had returned to England and retook the throne. Henry VI was sent to the Tower of London where he died violently, it is said, in May 1471.

Over the centuries both documents, one dated to the reign of Edward and the other to the reign of Henry, survived together and became part of the archive of Gloucester Corporation. The preservation of both documents allows us to see how ordinary people found ways and means to survive the impact of the War of the Roses and still be there when the dust settled. People in other parts of the country possibly did similar things but the evidence is yet to be found.

The conversation between the parties is a suggestive reconstruction. Their actual discussions in October/November of 1470 are not recorded.