Dovecotes in the Calendar of Inquisitions Miscellaneous Volume eight

Dovecotes in the Calendar of Inquisitions Miscellaneous Volume eight

A dovecote or dovecot was a structure intended to house pigeons or doves. Dovecotes may be square or circular free-standing structures or built into the end of a house or barn. They generally contain pigeonholes for the birds to nest. Pigeons and doves were an important food source historically in Western Europe and were kept for their eggs, flesh, and dung.[1]

It is sometimes difficult to know if a dovecote was for pigeons or doves. Occasionally documents come to the rescue with an answer. In 1431 a run-down dovecote at Wantage in Berkshire was worth nothing per year because there were no doves while another dovecote at Tawstock, Devon, was also worth nothing because it had no doves. Elsewhere young pigeons known as squab were bred in the dovecote at Ashcott in the manor of Shapwick in Somerset. There up to 360 squabs were produced in the early fourteenth century. The manor of Shapwick was owned by Glastonbury Abbey.[2]

The Romans seem to have had introduced dovecotes to Britain as suggested by pigeon holes at Caerwent. After the Romans left so it seems did dovecotes. The Normans re-introduced dovecotes after 1066.[3] This present article draws attention to various references to dovecotes in the Calendar of Inquisitions Miscellaneous, volume eight which covers the years 1422 to 1485. 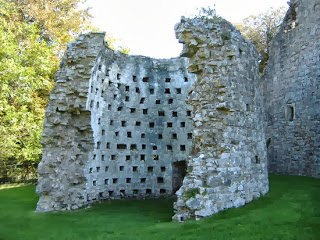 A cut-away dovecote at Oxwich showing the nesting boxes from Glamorganwalks.com

In 1396 Ralph Chamberlain owed £4,000 to Thomas Barton, executor of Sir Thomas Swinburn and was reluctant to pay. The sheriff of Suffolk was ordered to deliver the chattels of Ralph to the value of £1,500 but the sheriff said that Ralph had no chattels or goods in his bailiwick. Therefore an inquisition was taken in May 1397 of the lands of Ralph Chamberlain in Suffolk.

An unrelated inquisition was taken in Hertfordshire in October 1427 where the net value of a dovecote was given as 5 shillings. This dovecote was located in the manor of Maudeleyns. The manor was held in chief by William Street but was delivered by him to others without royal licence.[5] As a comparison for the Maudeleys dovecote, a straw thatched dovecote in County Meath in Ireland was worth 6 shillings 8 pence in 1381.[6]

When William Street acquired the manor from his cousin John Reynes in 1421 some of the manorial buildings were in need of repair but the dovecote was in good condition. William Street and his assignees did not manage the property such that by July 1428 the dovecote had decreased in value to 3 shillings 4 pence.[7]

William Street died in December 1330 and the subsequent inquisition post mortem found that the buildings at Northchurch were worth nothing and greatly in need of repair.[8] The dovecote was possibly one of these buildings.

Another inquisition was held in May 1428 relating to Maudeleys before William Ludsop, escheator of Buckinghamshire. The manor of Maudeleys covered land in both Buckinghamshire and Hertfordshire. In 1428 it was found that John Hertwell held part of the manor in 1423 consisting of 6 messuages, a dovecote, 3 carucates of land, and 100 acres of wood along with 100 shillings of rent. Hertwell held alienated the property to others without royal licence hence the inquisition. The dovecote had a net value of 20 pence per year in 1427. This dovecote is separate from the dovecote of William Street which was on the Hertfordshire side of the manor.[9]

After the death of William Street, John Hertwell along with John Pygmyll occupied the entire manor and took the issues. Another document said that Hertwell occupied the manor and took the profits since July 1417. The two continued to take the issues after the inquisition post mortem taken in November 1431 where Henry Street, aged 22 years and brother of William Street was declared the heir.[10]

In 1440 we learn of a dovecote in Leicestershire that was left go into ruin. By the act of 17 Edward II, cc. 11, 12 if a property owner was of unsound mind but had lucid intervals then the property should be passed to trustees to manage the property for the successors. In October 1422 Thomas Walsh of Leicestershire was judged to be of unsound mind and his property was entrusted to his sister, Margaret and her husband, Thomas Gresley, knight.[11]

Dovecote at Llantwit Major by Wikipedia.org

The affairs of the estate were properly maintained while Margaret was alive but things went downhill after her death in 1428. Thomas Gresley took the issues and profits of the estate for his own use and failed to provide reasonable living conditions and clothing to Thomas Walsh. The hall, 3 chambers, a kitchen, 2 granaries, 2 stables and a dovecote at the manor of Wanlip (total value of £20) were left fall into ruins by leaving them unroofed so that the timbers became rotten and decayed by exposure to rain.[12]

In 1450 the calendar mentioned a dovecote in Kent. Here the provost and canons of the collegiate church of St. Mary, Wingham held a messuage, a dovecote and a garden along with land in the districts of Preston, Ash, Staple and Wingham. The exact location of the dovecote and its value was not stated. The church held the land by grant from the king and this grant was renewed in October 1450.[13]

In 1455 a detailed inquisition was taken into the condition of the royal manor of Geddington in Northamptonshire. Parts of the manor were in a ruinous condition due to frequent pestilence and high rents but other parts were improving. Thomas Knyth took a parcel of land from the king and built a dovecote for which he paid the king 2 pence per year. This rent can be compared to another tenant who paid 2 pence a year rent for a dung-heap.[14]

In November 1461 a dovecote in Monkton, Kent, was taken into the king’s hand. This was not as a result of unpaid rents but because Henry Beaufort, Duke of Somerset, had backed the wrong side in the War of the Roses. The value of the dovecote was not specifically stated as it was included in a total figure of 100 shillings for the messuage, the dovecote and 450 acres of land. Henry Beaufort had held the property from the prior of Christ Church, Canterbury. In July 1468 King Edward IV granted the messuage, dovecote and land to John Brokeman.[15]

Further west in Salisbury a dovecote was in disputed ownership in 1466. Earlier in the century William Shirley and Agnes Cryschirche jointly held a messuage, a dovecote and a garden called “Balles tenement” in Salisbury from Richard Beauchamp, Bishop of Salisbury, at a yearly rent of 2 shillings. The whole property was worth 40 shillings net value per year.[16]

In 1430 Walter Shirley granted the property to John Estbury and Amice, his wife for their lives with reminder to the mayor and commonalty of Salisbury. Following the deaths of John and Amice Estbury, the mayor, John Wyse, entered the property in May 1460 and took the issues for the city council.

The Bishop of Salisbury cited alienation contrary to the Statute of Mortmain and entered the property in August 1460. The city council failed in their efforts to eject the bishop. A royal inquisition into the alienation without licence of a number of properties in Salisbury, to the city council, taken in October 1466, found that the bishop still held the former Shirley property.[18]

After 1466 the Calendar of Inquisitions Miscellaneous, volume eight makes no further references to dovecotes. It is hoped to continue the study of medieval dovecotes from other sources in a future article.